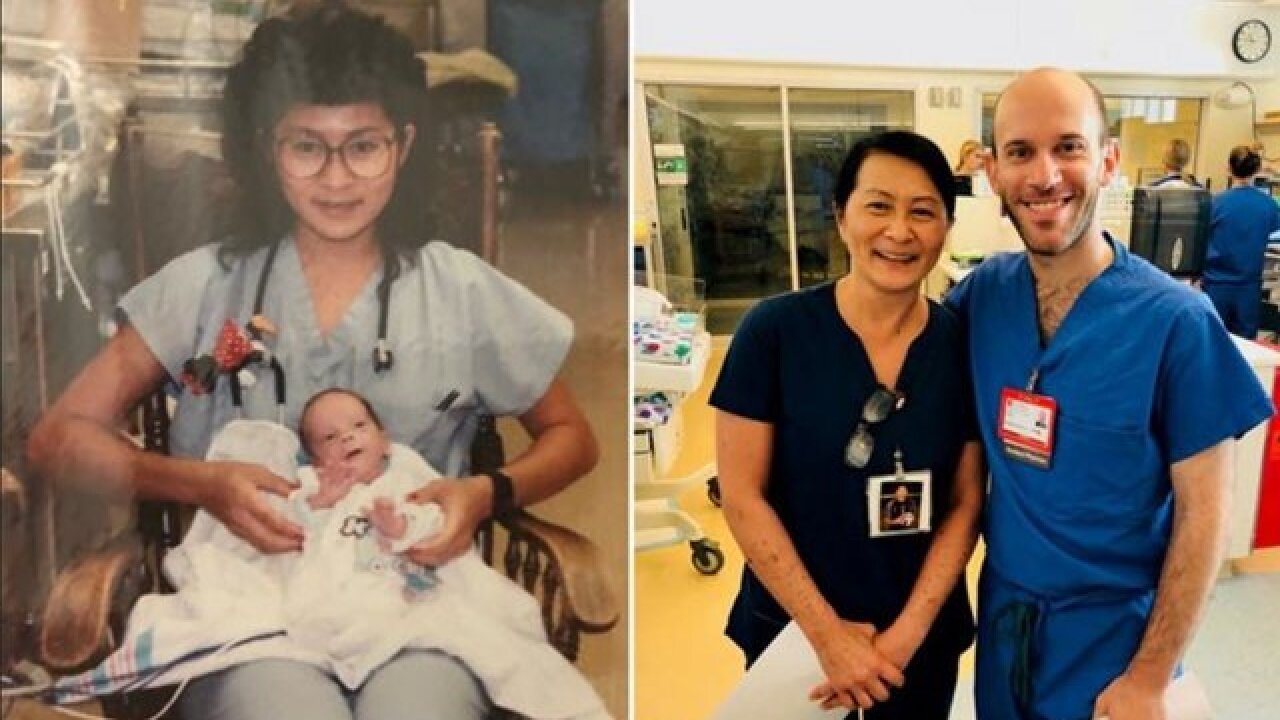 It had been more than 28 years since Vilma Wong heard the name Seminatore. But something about it sounded familiar.

The nurse was working at Lucile Packard Children's Hospital in Palo Alto, California, the other day when she encountered a pediatric neurology resident on his morning rounds. The young man said his name was Brandon Seminatore.

So she began asking him questions. A lot of questions.

"He told me he was from San Jose and that as a matter of fact, he was a premature baby born at our hospital," Wong said. "To confirm my suspicion, I asked him if his dad was a police officer."

Seminatore, 28, was confused. How did she knew about his father? And then he remembered something his mom had told him two years earlier.

Excited that her son was about to begin his residency at the hospital where he was born at in 1990, Seminatore's mom had asked him in 2016 look for a nurse named Vilma. She cared for you when you were a premature baby, his mother said.

Thinking the nurse had probably retired, Seminatore disregarded his mom's request and continued to work at the hospital -- unaware that the woman who once held him as a baby was working in the same building.

Stunned by the encounter, he told his mother right away.

"Meeting Vilma was a surreal experience," Seminatore said in a press release issued by the hospital. "When Vilma recognized my name, it truly sunk in that I was one of these (premature) babies. I've come full circle and I'm taking care of babies with the nurse that took care of me."

His mom shared a photo of Wong holding him on her lap when he was 29 weeks old.

The hospital posted the photo on Facebook, alongside a current photo of the pair, and the internet did what it does best. Thousands of shares later, the pair were the talk of the hospital -- and far beyond.

Wong has been a nurse in the hospital's neonatal intensive care unit (NICU) for 32 years. She never thought she'd get to work alongside a baby she once held in her arms.

"I was in shock initially, but overjoyed to know that I took care of him almost 30 years ago and now he's a pediatric resident to the same population he was part of when he was born," she said in the hospital press release.

NICU nurses work under stressful conditions, caring for the hospital's most fragile patients, the hospital said.

Seminatore praises Wong's dedication and admires the fact that even under all that stress she was able to remember a patient's name nearly three decades later.

The meeting also taught him a lesson about the profession he chose.

"We all try to give our patients the best chance to grow up happy and healthy," he said. "This story is for families with children who have had a rough start in life. I want to give them hope."