Hurricane Michael: Storm has killed two people as it moves out to Carolinas 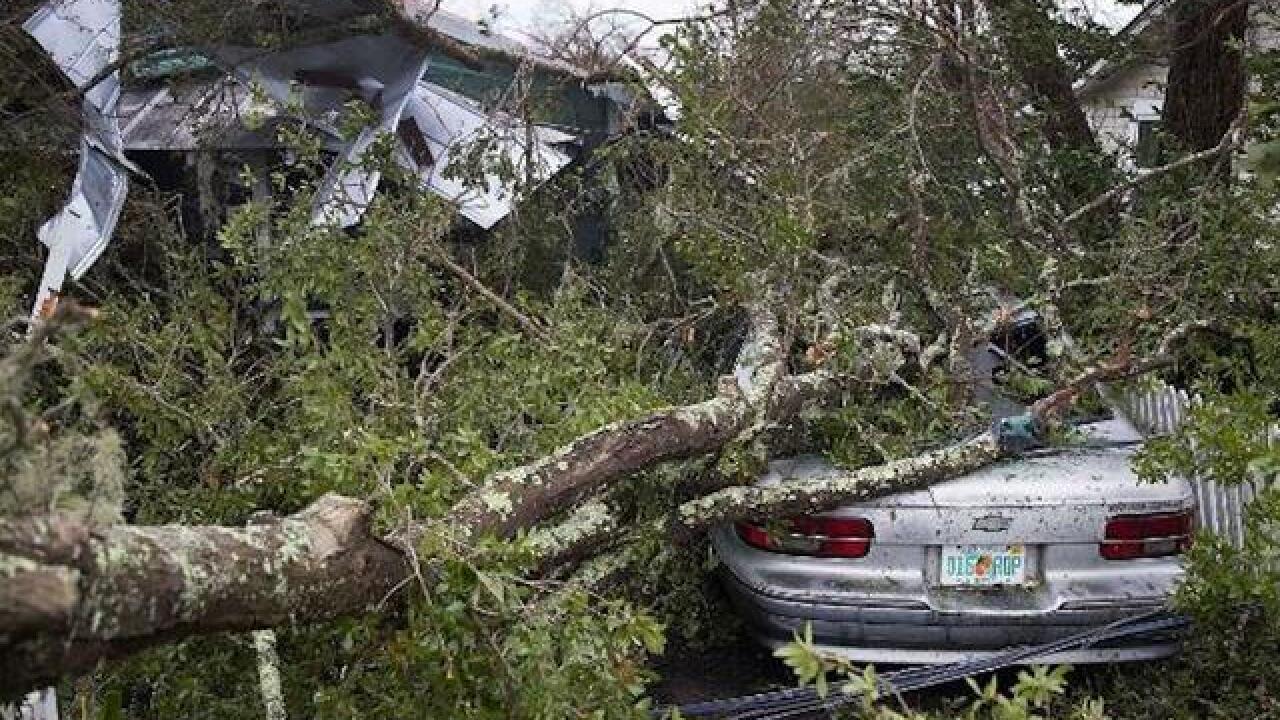 Image copyright 2018 Getty Images. All rights reserved. This material may not be published, broadcast, rewritten, or redistributed.
Joe Raedle
<p>PANAMA CITY, FL - OCTOBER 10: A tree lays on a home and car after hurricane Michael passed through the area on October 10, 2018 in Panama City, Florida. The hurricane hit the Florida Panhandle as a category 4 storm. (Photo by Joe Raedle/Getty Images)</p>

After slamming Florida and lashing Georgia, Michael is far from finished as it swirls northeast, threatening the storm-weary Carolinas.

Since making landfall on Wednesday as a powerful Category 4 hurricane, the now tropical storm has left thousands of people without power, uprooted trees, turned homes and marinas into ruins and killed at least 2 people.

"It feels like a nightmare," Linda Albrecht, a councilwoman in Mexico Beach , Florida, said of the catastrophic damage in her town. "Somebody needs to come up and shake you and wake you up."

The wrath of Michael continued into Georgia, bringing possible tornadoes and winds that kept first responders away from the streets for hours --- even as the storm weakened and became a tropical storm.

On Thursday, authorities and residents will begin to discover the full extent of Michael's destruction in Florida and Georgia while the Carolinas brace for possible flooding, tornadoes and dangerous winds in many of the same areas still recovering from Hurricane Florence flooding.

Michael is expected to drop 4 to 7 inches of rain from eastern Georgia to the southern Mid-Atlantic and up to 9 inches of rain in isolated parts of North Carolina and Virginia, the National Hurricane Center said.

"While we will not see the full force of Hurricane Michael the way Florida will, we could see gusty winds, rain, flash flooding and even tornadoes," South Carolina Emergency Management Director Kim Stenson told CNN affiliate WACH.

• Death toll rises: At least 2 people were killed in storm-related incidents since Wednesday.

• No power, no internet: More than 500,000 customers remain without electricity in Alabama, Georgia and Florida.

• Where is Michael? The storm is about 30 miles west of Augusta, Georgia and is heading toward the northeast before it goes off into the Atlantic.

• Looters arrested: Arrests have been made after reports of looting in Bay County, Florida, Congressman Neal Dunn said.

• Historic storm: Michael is the third most intense hurricane to hit the continental US since 1851 based on its low central pressure, CNN meteorologist Pedram Javaheri said.

Uprooted trees, downed power poles and limited access to communications have become challenges for first responders and families trying to reach residents in need and assess the wellness of others.

Megan McCall says her brother Jeff and his family were riding out the storm in Compass Lake, Florida and no one has heard from them since Wednesday afternoon.

Her brother was able to tell a friend that his home was starting to get cracks in the walls and water was rushing in Wednesday. A neighbor told McCall that all the docks in the area were destroyed and many people are stuck in their homes as the roads have been blocked with debris.

"I just need to know he's OK. If the house and the cars are destroyed they can be replaced, but my niece needs her dad -- and as much as I sometimes can't stand him, I would do anything to just know he's OK," McCall said.

In Wakulla County, the sheriff's office made a list of people who decided to ride out the storm and will begin the process of checking on them Thursday, sheriff's captain Chris Savary said.

As of Thursday, the death toll was two but authorities feared it could rise in the coming days.

An 11-year-old girl was killed in Seminole County, Georgia during the storm, emergency management officials said. A metal carport was picked up by the wind and crashed through the roof of a structure, hitting the girl's head, said Travis Brooks, the county's emergency management director.

The child's death is the second known storm-related death. A man died Wednesday after a tree fell on a home near Greensboro, Florida, the Gadsden County Sheriff's Office said.

Some residents in the Florida Panhandle saw wind gusts blowing off rooftops, destroying wooded fences and even knocking down brick walls.

Rob Golding has opened his home in the Springfield Callaway suburb of Panama City to some of his neighbors whose homes were heavily damaged. Some of them were inside their homes when they saw their roofs fly away, he said.

"My home was built in 1962 is the only one with a solid roof left," Golding said. "My mother who passed two years ago, she put a lot of money in this house I asked her to keep her hands on it today and she did."

"It looks like a tornado came through here," he said.

Hundreds of military families are among the thousands of people who were evacuated prior to the storm and won't be able to immediately return home. Officials at the Tyndall Air Force Base in Panama City said dozens of trees and power lines went down, and several buildings lost their roofs across the military base. They said it could take weeks before it's safe for personnel and their families to return.

Michael's strength may reflect the effect of climate change on storms. The planet has warmed significantly over the past several decades, causing changes in the environment.

Human-caused greenhouse gases in the atmosphere create an energy imbalance, with more than 90% of remaining heat trapped by the gases going into the oceans, according to the National Oceanographic and Atmospheric Association. There's evidence of higher sea surface temperature and atmospheric moisture, experts say.

While we might not get more storms in a warmer climate, most studies show storms will get stronger and produce more rain. Storm surge is worse now than it was 100 years ago, thanks to the rise in sea levels.

According to Climate Central, a scientific research organization, the coming decades are expected to bring hurricanes that intensify more rapidly, should there be no change in the rate of greenhouse gas emissions.

Get the latest delivered to your inbox: Sign up for Hurricane Michael email alerts here .