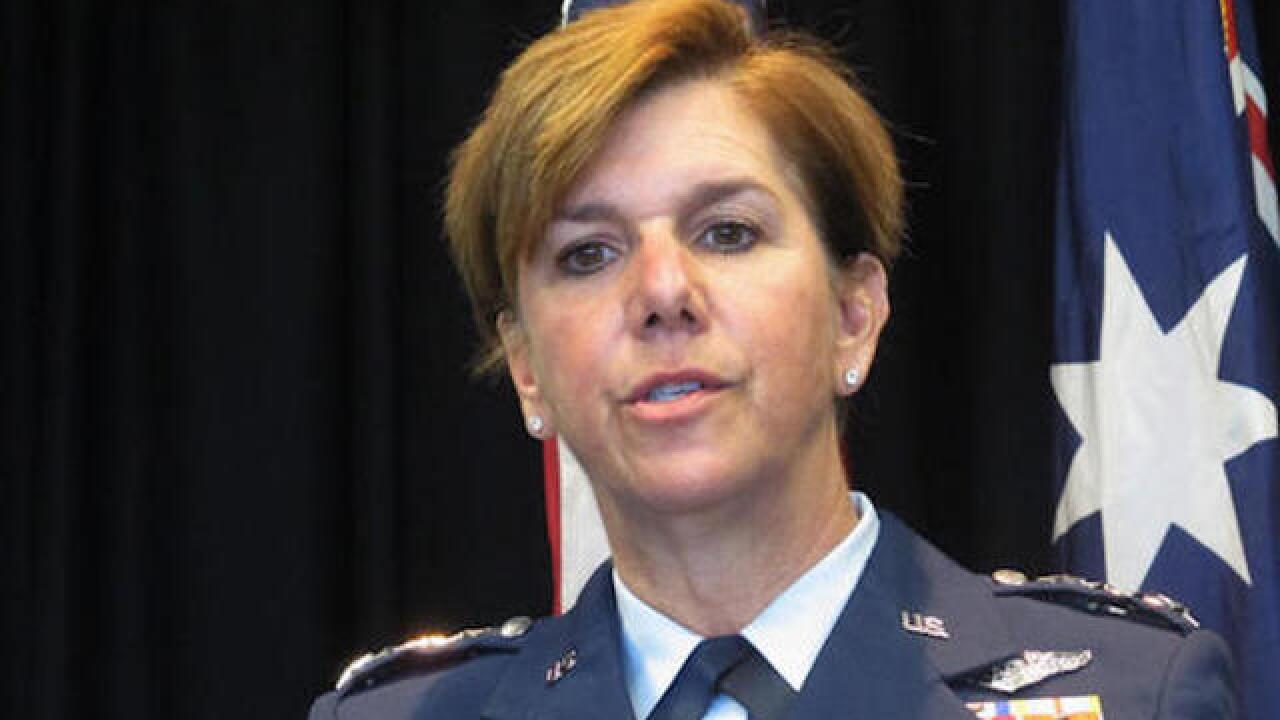 Copyright Associated Press
Rod McGuirk
<p>In this March 8, 2016 file photo, Gen. Lori Robinson speaks to reporters at the U.S. Embassy in Canberra, Australia. The Senate has confirmed an Air Force general to be the first female officer to lead one of the military's warfighting commands. By voice vote late Thursday, April 28, 2016, the Senate approved Robinson to be commander of U.S. Northern Command. The command is responsible for preventing attacks against the U.S. (AP Photo/Rod McGuirk)</p>

DENVER (AP) — The Air Force has just two female four-star generals, and one is about to become the first woman to head a top-tier U.S. warfighting command, but that may not be the most remarkable thing about her.

Gen. Lori J. Robinson takes over the North American Aerospace Defense Command and U.S. Northern Command in Colorado on Friday. People who know Robinson describe her as the personification of a new generation of leaders, someone who understands the Air Force has a broad role in space, cyber security and drones, not just flying and fighting.

That's what sets Robinson apart, not her gender, said Maria Carl, a retired Air Force colonel who knows her.

"Gen. Robinson reflects that change as much as anything else," said Carl, who serves on the Military Affairs Council of the Hawaii Chamber of Commerce. Carl didn't serve under Robinson but worked with her in her Chamber of Commerce role, when the general headed the Pacific Air Forces at Joint Base Pearl Harbor-Hickam.

"She has an ability to take all the different pieces of the picture and pull it together strategically," Carl said.

Robinson wasn't available for an interview before she officially started her new assignment at Peterson Air Force Base in Colorado Springs.

Her family has deep roots in the Air Force. Her husband, retired two-star Gen. David Robinson, was a pilot in the Thunderbirds demonstration team. David Robinson's daughter, 2nd Lt. Taryn Ashley Robinson, graduated from the Air Force Academy in June 2005 but was fatally injured in a pilot-training crash that autumn. She died in January 2006, four weeks before her 23rd birthday.

Lori Robinson's father, George Howard of Jackson, New Hampshire, was a 30-year Air Force veteran and a pilot in the Vietnam War.

"I have looked up to my father my entire life," Robinson told senators at a confirmation hearing for her new job last month. He accompanied her to the hearing.

One of her new commands, the North American Aerospace Defense Command or NORAD, is a joint U.S.-Canada operation that defends the skies over both nations and monitors sea approaches. It's best known for its Cold War-era control room deep inside Cheyenne Mountain — now used only as a backup — and for its wildly popular NORAD Tracks Santa operation on Christmas Eve, fielding calls from children asking for Santa's whereabouts.

Her other command, Northern Command, is responsible for defending U.S. territory from attack and helping civilian authorities in emergencies. It was created after the Sep. 11, 2001, terrorist attacks.

Northern Command is one of nine warfighting centers the Pentagon calls unified combatant commands. They combine elements of all the military services and have responsibility for geographic areas of the globe or specialized roles, such as special forces.

All the other combatant commands are led by men.

Robinson has an extensive background in command and control, the science of orchestrating military operations across a broad area. In her previous job, commander of Pacific Air Forces, her area of responsibility spanned more than half the globe.

"You're dealing with a lot of countries, a lot of the air forces in the Pacific, China being one of them," said Darryll Wong, a retired Air Force major general and Hawaii's former adjutant general. "She had to be a fast learner."

Wong said Robinson showed she has a compassionate side as well.

"I think it's very reassuring that you have a strong leader and a compassionate leader," he said. "It says a lot to the enlisted (personnel)."

Robinson joined the Air Force in 1982 through the ROTC program at the University of New Hampshire. She has been an air battle manager and tactics chief, and her commands have included an operations and training groups. She was also an Air Force fellow at the Brookings Institute.

She received her fourth star in October 2014. The only other female four-star general currently serving in the Air Force is Ellen M. Pawlikowski, who leads the Air Force Materiel Command at Wright-Patterson Air Force Base, Ohio.