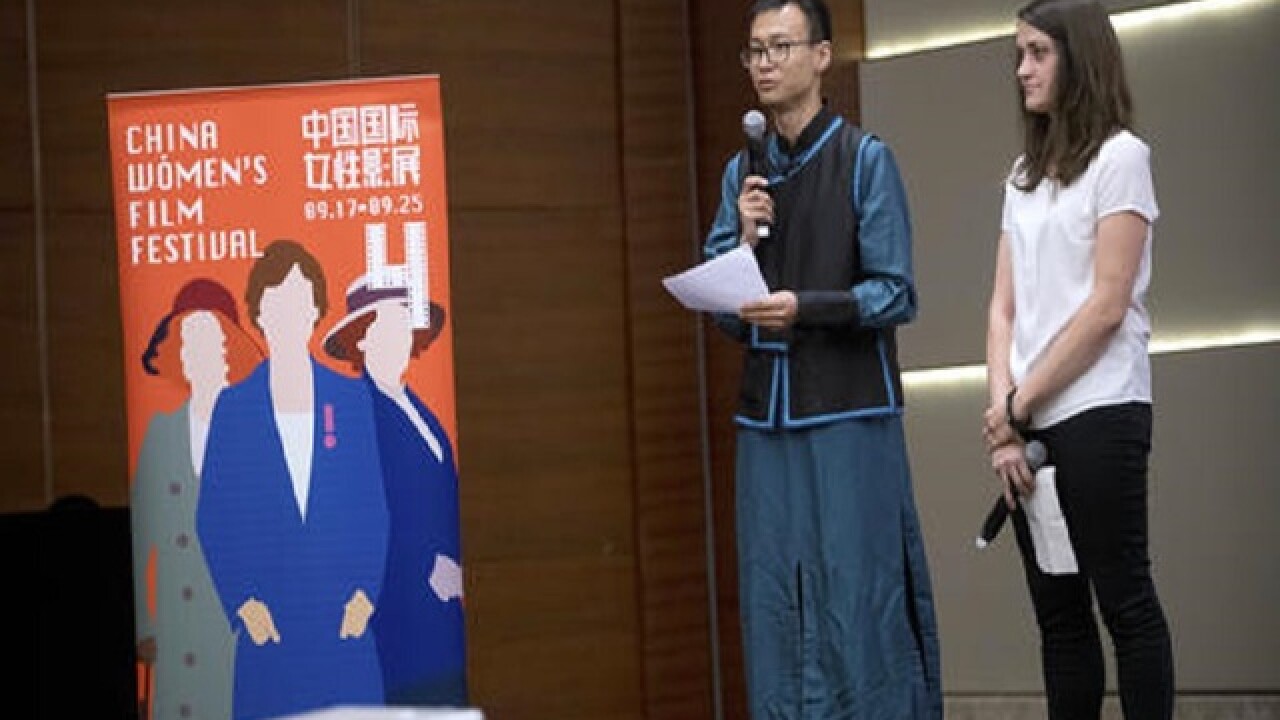 BEIJING (AP) — In films, women and girls are much more likely to take off their clothes than male actors and to be scantily clad in the first place, studies show. Less than a third of speaking characters are female and men outnumber women behind the camera by a ratio of five to one.
Campaigners are highlighting this gender inequality in film at the China Women's Film Festival that runs until Sunday in Beijing, arguing that the phenomenon distorts views of women and the world, and that the male-dominated film industry repeats the same mistakes out of habit.
The nine-day festival features more than 30 Chinese and international films about women's rights, women's achievements and gay women, which are then slated to be shown in more than 10 cities across China.
Festival chairman Li Dan said the aim was to increase the representation of women in film at a time when Chinese audiences have apparently accepted gender inequality in movies.
"Usually people and audiences have the idea that female characters should be pretty, be looking for a good marriage or a rich man or a Mr. Right, and if the movie follows that path it will have a good box office," said Li, who works for Crossroads Center Beijing, a nonprofit working with marginalized groups and the festival organizer. "Very few movies have strong female roles and characters."
Hollywood actresses have also spoken out about a lack of good roles for women and the gender pay gap, among them Cate Blanchett, Jennifer Lawrence and Meryl Streep, who starred in the festival's opening film "Suffragette," about British women's fight for the vote in the early 20th century.
In the last three years, a campaign has gradually been gaining ground to raise awareness of the unequal representation of men and women in movies based on the Bechdel Wallace test, which started out as a joke in a 1986 comic book. To pass the test, a film must have two female characters with names who talk to each other in the film about something other than men. Films that fail the test include "Avatar," ''Slumdog Millionaire" and "The Jungle Book."
Li said that at the end of the festival they plan to write an open letter signed by at least 50 celebrities to major Chinese film producers and cinema companies calling on them to use the test in the hope that it will affect the type of films that are produced and raise awareness of gender inequality in film and society. He also hopes to attract tens of thousands of signatures from the public.
The sponsors of the festival, which runs until Sunday, include the embassies of Holland, Norway, France, Sweden and Britain, and the European Union delegation.
Other independent film festivals have run into trouble from Chinese authorities, but Li said they did not choose films with politically sensitive topics, such as the recently loosened one-child policy. Although China's constitution enshrines gender equality, some nongovernmental groups promoting women's rights have been closed over the last 18 months amid a more general crackdown on political activism.
Ellen Tejle, who runs an arthouse cinema in the Swedish capital of Stockholm, launched the "A-rate" campaign three years ago to encourage producers, cinemas and the public to submit a film to the Bechdel Wallace gender bias test.
At the China Women's Film Festival, Tejle said that internationally, 7 percent of directors are women and women have 30 percent of the speaking roles — and this hasn't changed since the 1940s.
Even Disney characters Mulan and Pocahontas, who are the protagonists of their respective films, speak for less than a quarter of the speaking time of all the characters, Tejle said. Women's characters are often limited to mothers, wives, girlfriends and princesses and shown without jobs, while male roles are funny, strong and heroic, affecting the dreams that children have for their own lives, she said.
In China, movies tended to portray the ruling Communist Party's ideal of gender equality up until the 1990s, when the film industry went commercial with a view to making money. "Since then, the proportion of female roles has gone down, and sometimes if you remove their roles it wouldn't affect the overall movie," said Li.
Debunking the idea that films with women in the lead role aren't bankable, a study by the Geena Davis Institute on Gender in Media in Los Angeles found that they outgrossed films with a male lead: Among the top 100 grossing non-animated films in North America of 2015, movies with female leads made on average $90 million, while those with male leads made $76 million.
Other research has found that in the 11 countries with the biggest box office, a quarter of actresses are shown partially or fully naked as opposed to just over a tenth of male actors. That study, sponsored by the Geena Davis Institute and carried out by the Annenberg School for Communication and Journalism at the University of Southern California, also found that female teens were just as likely to be sexualized — shown in sexy attire or partially naked— in films as women aged 21 to 39.
Copyright 2016 The Associated Press. All rights reserved. This material may not be published, broadcast, rewritten or redistributed.