CNN's Jim Acosta is undaunted by critics: 'We have a job to do' 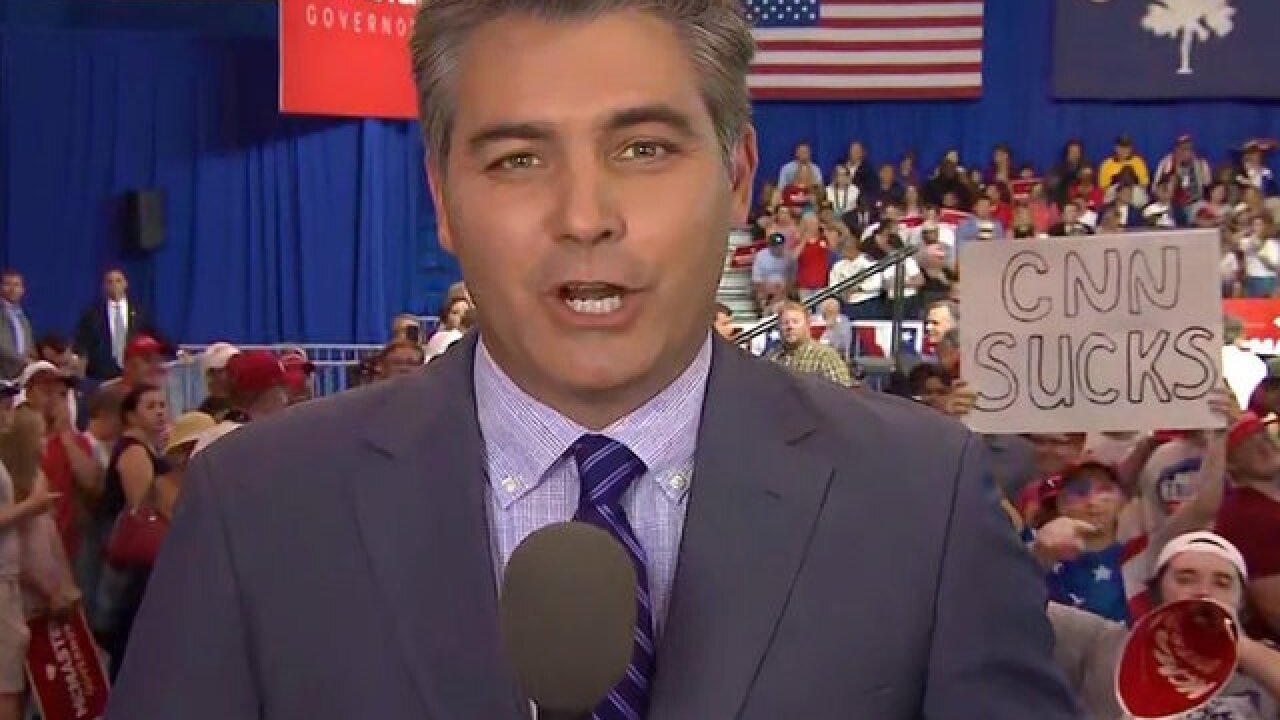 © 2018 Cable News Network, Inc.
CNN
<p>CNN reporter Jim Acosta recalls what it was like to cover President Donald Trump's South Carolina rally, where he was heckled by many in attendance.</p>

CNN's Jim Acosta has an affectionate name for the media outlets that promote President Trump: The "MAGA-phone."

That's the "Make America Great Again" megaphone. "They by and large just echo what the president wants to hear," Acosta says.

He has first-hand experience with the pro-Trump media because he's one of the top targets of criticism. Acosta, CNN's chief White House correspondent, has plenty of fans but also plenty of detractors. His critics say he's a showboat who disrespects President Trump by shouting questions and sharing his own opinions. They call him a "buffoon" and sometimes much worse.

And to all that, Acosta responds: "We fill a necessary role in our democracy. The rest of the world is watching us. They don't understand how the president can call us 'fake news' and the 'enemy of the people.' And my response to all of that is, my goodness -- what -- are we supposed to sit back and do nothing? Are we supposed to not push back when we're treated in that fashion? And my sense of it is that you have to push back."

Acosta spoke about his job on Sunday's "Reliable Sources." Reacting to some of the harsh criticism directed at him, he said, "if they want to send me to hell, I will still be shouting at the devil, is the way I look at it. We have a job to do."

He said some people don't understand that there's a "process" when a small group of journalists, known as a pool, observes a presidential event and tries to ask questions. He said it typically happens "at the very end of these pool opportunities."

"It's not like we barge into the Oval Office or barge in at Easter Egg Roll and start shouting questions," he added.

But the questions can be pointed. Oftentimes the questions are about Trump-related scandals or controversies. Trump's supporters sometimes bristle at Acosta's behavior.

Acosta believes he knows why Trump's allies rail against his work.

"To some extent, you know, the president, Fox News, they don't have Barack Obama around anymore. They don't have Hillary Clinton, although the president goes after Hillary Clinton a lot. So does Fox News. And so we have sort of replaced Obama and Hillary," Acosta said. "They need somebody to attack. And I think that we have sort of filled that role."

He also said the "MAGA-phone" would "rather focus on our reporting" than on the president's questionable behavior.

Acosta hears from some of those critics at Trump's popular rallies.

"Sitting next to Acosta is the ... ahem ... 'best' seat in the house. Frequent chanting of 'CNN sucks,' 'Go home, Jim,' after which many have then asked for selfies and autographs," Associated Press reporter Meg Kinnard tweeted during a rally in Columbia, South Carolina last week.

On "Reliable Sources," Acosta recalled the scene: "I told people at that rally on Monday night in Columbia, 'Listen, we're not going to just do the news for the Republicans. We have to do the news for everybody, and you may not like what you hear all the time.'"

Acosta also said he sometimes asks critics, "Are you forming your conclusions on what we do based on watching CNN or watching other networks -- our rivals and so on -- and their coverage of what we do?"

"By and large, what I find is that people are developing their impressions of us by watching 'Hannity' and so on, and I say, 'Hey, you know, give us a chance. Watch us and then make up your mind,'" he said.

Acosta described Fox News as "state-supported media," referencing President Trump's preference for the network where the prime-time hosts and pundits frequently promote his policies while railing against his critics.

America now has "what I would consider to be a system of state-supported media — in that you have a White House, you have a president, they lend so much support to one individual news network, which gives them beneficial coverage, that it has changed the nature of what we view as being our system of delivering the news in this country," he said. "One network benefits from a very symbiotic relationship from the White House, and we all have to grapple with that on a daily basis."

He said there are days when the White House declines to have a press briefing, but books spokespeople on Fox shows "because they know they're going to get a friendly platform."

The president's most recent interview was with Fox Business Network host Maria Bartiromo. She has been widely criticized for her softball questions during the interview.

"Calling out his falsehoods" consumes "a lot of the coverage," he observed. "And it presents, I think, to the American people this sense that all we're doing all day long is bashing the president, when, in fact, we have to be fact-checkers."