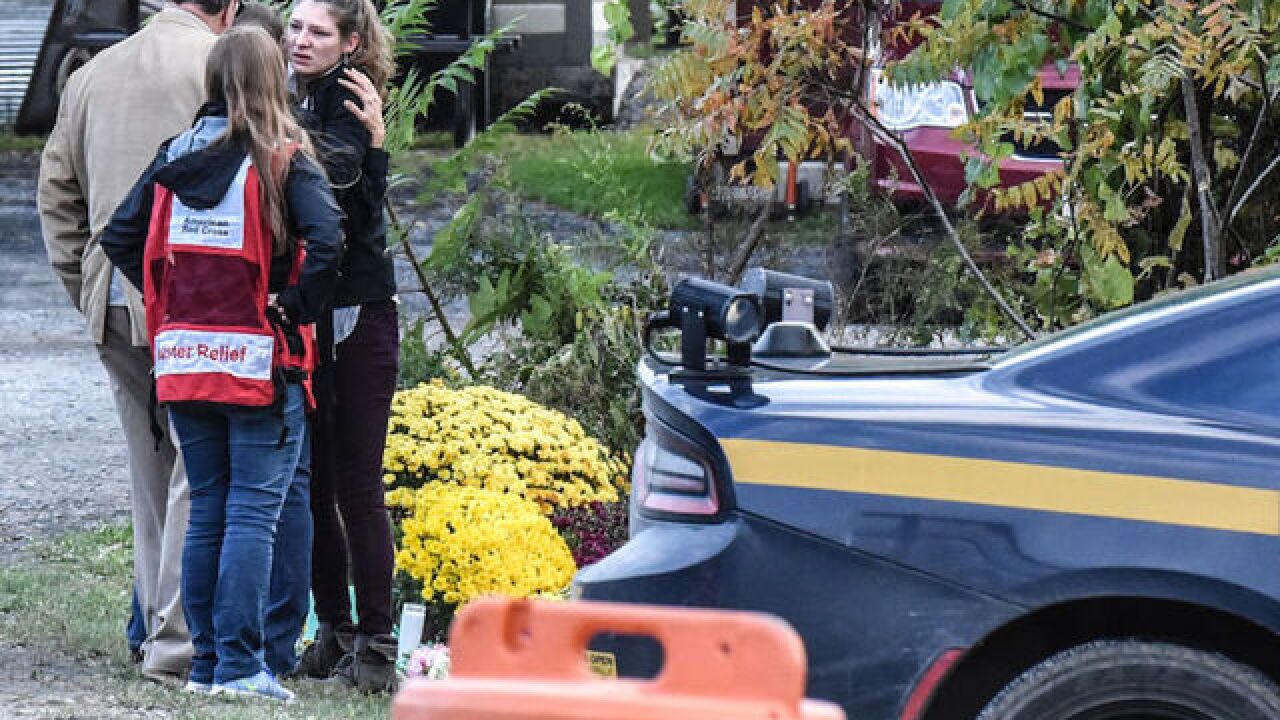 Image copyright 2018 Getty Images. All rights reserved. This material may not be published, broadcast, rewritten, or redistributed.
Stephanie Keith
<p>People mourn at the site of the fatal limousine crash on October 8, 2018 in Schoharie, New York.</p>

The attorney for the limousine company whose vehicle crashed in upstate New York on Saturday disputed statements from officials that the stretched Ford Excursion should have never been on the road.

Both issues were fixed and, "as recently as last week they were told by the Department of Transportation that they could, that this vehicle was roadworthy and they could drive it," Kindlon said. "I am disputing that any recent failures of minor safety defects contributed to this crash," he said.

State officials charged back, saying the vehicle was not allowed to be in service.

"The assertion that the limousine was cleared to be on the road following the September inspection is categorically false," said Joseph Morrissey, spokesman for the New York State Department of Transportation, in a statement. "The vehicle was subject to inspections and the owner was warned not to operate the vehicle; the vehicle was placed out of service."

For reasons still unknown, the limo plowed through a stop sign in Schoharie and crashed into a parked SUV. The crash left 20 people dead, including the 17 passengers who rented the limo for a birthday party, two pedestrians and the driver.

Federal, state and local investigators have flooded Schoharie to try to understand what caused the deadliest U.S. transportation accident in almost a decade. The wreck has placed Prestige Limousine Chauffeur Service and its owner, Shahed Hussain, under scrutiny.

Before he owned the company, the Pakistani national was an informant for the FBI, where he conducted an undercover investigation for several months in 2008 and 2009, court records show. A state official and a former attorney with knowledge of his cooperation with the FBI confirmed to CNN that Hussain was the informant.

What we know about the driver

Kindlon disputed claims that the limo's driver did not have the proper license to operate the vehicle. The company checked with the Department of Motor Vehicles "a number of different times" and were told that he did, Kindlon said.

Authorities identified the driver as Scott T. Lisinicchia, 53, of Lake George, New York. He worked for the company for years, Kindlon said, and was a wage employee who worked when the company needed a driver.

Kindlon called him a "very reliable employee and a great driver."

He added the company is looking into the driver's history as part of an internal investigation. He also said the company is collecting maintenance records, driver logs and ownership records and intends to turn them over to authorities.

The birthday party guests were riding in a 2001 Ford Excursion that was converted into a limousine. As more details emerge about the apparent broken rules, investigators also are looking into whether the unusual structure of the limo may have contributed to this mass tragedy.

"I would just ask for the investigation to take place so we can figure out exactly why the vehicle crashed," Kindlon said.

Company's vehicles off the road

U.S. Department of Transportation records show the company's vehicles were inspected five times in the last two years, and the company has had four vehicles taken out of service.

Kindlon said the vehicles taken off the road were sold or transferred to different owners. Those that had safety problems or mechanical problems were fixed and put back in service.

According to the Federal Motor Carrier Safety Administration, the vehicle had the following three violations in a September 4 inspection that earned it an "out of service" designation, meaning it could not be on the road because it poses an imminent hazard:

• No or defective bus emergency exits

• Inspection, repair and maintenance of parts and accessories

The vehicle had an additional seven violations that did not earn an "out of service" designation, including failure to correct defects previously noted.

The company's owner was an FBI informant

The company's owner is currently in Pakistan, where he travels frequently. "He is ready and able to come back whenever they need him," Kindlon said.

He skirted deportation for his conviction by agreeing to cooperate with an investigation into another person. In 2007, Hussain became a paid informant for the FBI and started working in the lower Hudson Valley, records show. Hussain's job was to locate Muslims who may be plotting against the United States, records show.

Hussain attended services at a mosque in Newburgh at the direction of the FBI in 2008, records show. The FBI equipped him with a home that had concealed audio and video recording equipment as well as audio equipment for his car. Hussain presented himself as a wealthy Pakistani immigrant who knew about Islamic teachings.

He testified in at least one federal case, records show.

Before the disaster, the 17 birthday party guests in the limo -- including newlyweds, young couples and four sisters -- were headed to an upstate New York brewery. Authorities released their names Tuesday:

The pedestrians were identified as Rachael K. Cavosie, 30, of Waterford and Michael C. Ukaj, 34 of Johnstown.