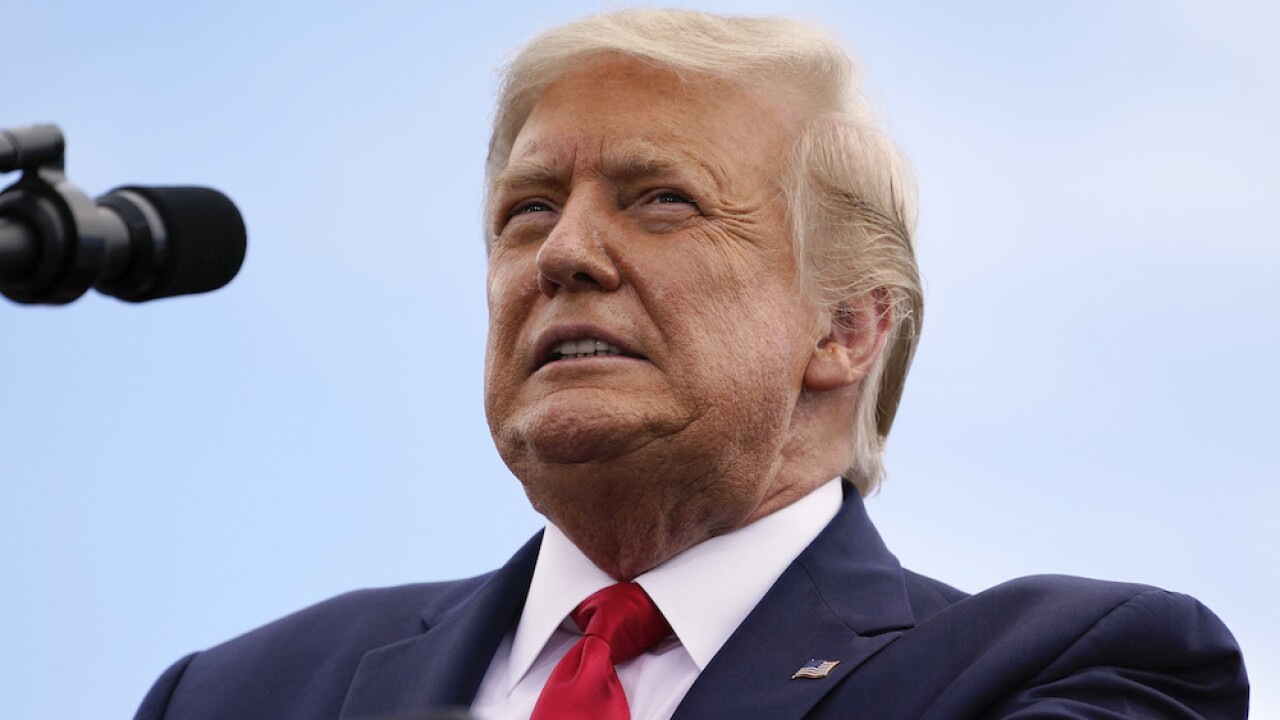 Copyright 2020 The Associated Press. All rights reserved
Evan Vucci/AP
In this Tuesday, Sept. 8, 2020 photo, President Donald Trump speaks on the environment at the Jupiter Inlet Lighthouse and Museum in Jupiter, Fla. The U.S. Justice Department is seeking to take over the president’s defense in a defamation lawsuit from a woman who accused him of rape, and federal lawyers asked a court Tuesday to allow a legal move that could put the American people on the hook for any money she might be awarded. (AP Photo/Evan Vucci)

President Donald Trump knew weeks before the coronavirus was confirmed to have reached the United States that the virus was dangerous and "deadly," while making public statements in which he downplayed the severity of the disease, according to audio files obtained by CNN.

The audio files were made by journalist Bob Woodward, during several conversations with Trump in early 2020. Woodward is publishing a book about Trump later this month. The Washington Post also confirmed that Woodward's book contains reporting about Trump downplaying the severity of the virus.

According to the audio files published by CNN, Trump told Woodward on Feb. 7 that the coronavirus was reported to have airborne transmission and that COVID-19 was more deadly than a "strenuous flu."

That same day, Trump tweeted that he had a conversation with Chinese President Xi Jinping, in which he claimed that China was running a "very successful operation," and that the virus would be "gone" once the weather gone warmer. On March 9, Trump compared coronavirus the flu in a tweet, adding that "nothing is shutting down."

CNN also published audio files from Woodward taken on March 19, in which Trump admitted that "it's not just old people" who are being infected by the virus. He also told Woodward that he "always wanted to play it down," because he "didn't want to create a panic."

When asked during a Wednesday briefing if Trump ever "intentionally misled" Americans regarding the severity of COVID-19 White House Press Secretary Kayleigh McEnany denied the claims, pointing to the fact that Trump said he wanted to "avoid chaos."

"The president has never lied to the American public on Covid" -- Kaleigh McEnany (Trump in fact said coronavirus would go away on its own without anyone dying 190,000 deaths ago) pic.twitter.com/irsvNEUz7a

Democratic presidential nominee Joe Biden responded to the reports on Wednesday afternoon, calling Trump's decision to downplay the virus "a life and death betrayal to the American people."

More than 6 million Americans have contracted COVID-19, and more than 190,000 have died — both of which lead the world.

Woodward's book, Rage, will be released on Sept. 15.