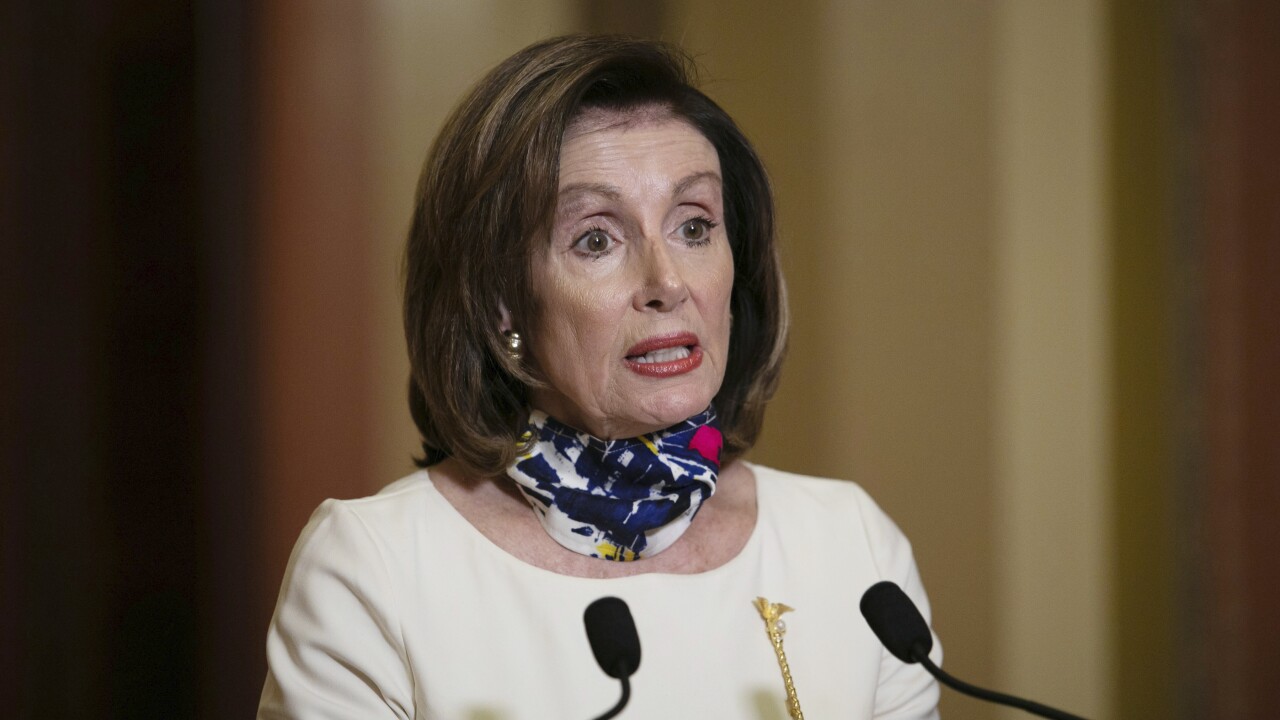 Graeme Jennings/AP
House Speaker Nancy Pelosi of Calif., speaks about the so-called Heroes Act, Tuesday, May 12, 2020 on Capitol Hill in Washington. Pelosi unveiled a more than $3 trillion coronavirus aid package Tuesday, providing nearly $1 trillion for states and cities, “hazard pay” for essential workers and a new round of cash payments to individuals. (Graeme Jennings/Pool via AP)

WASHINGTON, D.C. – Democrats in the House of Representatives have unveiled a proposal for another pandemic relief package to provide aid to Americans during the coronavirus crisis.

The massive package introduced by Speaker Nancy Pelosi on Tuesday would allocate more than $3 trillion to several different places, including to state governments and the bank accounts of citizens.

“The HEROES Act” calls for another round of stimulus payments. It would offer $1,200 in direct cash aid to individuals and up to $6,000 per household. The income thresholds are largely the same as the CARES Act.

Unlike the first round of payments approved by Congress in March, families could receive $1,200 per dependent, up to three dependents. Previously, parents were given $500 for each dependent. It also wouldn’t be limited to dependents under 17 and younger.

The measure would also extend $600-per-week unemployment benefits through January, for the millions who have filed for unemployment since the crisis began.

The bill would also provide nearly $1 trillion for states, cities and tribal governments to avert layoffs and there would be $75 billion more for virus testing, contact tracing and treatment.

Another $200 billion would be set aside for a "Heroes Fund" which would provide hazard pay for essential workers, such as front-line health care employees.

The package also includes a $25 billion bailout for the U.S. Postal Service. That’s not nearly as much as the USPS asked for from lawmakers last week. The agency requested $89 billion and said if Congress fails to act, the USPS could run out of money by September.

While much of the bill has to do with allocating funds, there are also previsions that aim to address the pandemic in other ways. One example: the bill calls for it to be mandatory for airline and public transit passengers to wears face masks.

A House vote on the legislation is expected Friday and will likely pass, with the Democrats controlling that chamber of Congress. However, in the Republican-dominated Senate, Majority Leader Mitch McConnell called the measure a grab bag of “pet priorities" for Democrats and doesn't deal with “reality.”

Th GOP is focused on providing liability protections for businesses that are deciding whether or not to open back up and ask employees to return to work. This would raise the threshold for virus-related malpractice lawsuits and provide legal protections for companies. This will likely be part of the bargaining with Democrats, who have rejected the idea. They argue protecting workers over businesses should be the priority.

While House Democrats could pass the bill this week, the Senate won't consider it until after the Memorial Day holiday.

Pelosi defended the bill’s stunning $3 trillion price tag in an interview with The Associated Press on Wednesday, saying it’s what’s needed to confront the “villainous virus” and economic collapse.

She acknowledged the proposal is a starting point in negotiations with President Donald Trump and Republicans.

“We have to address in a big way,” Pelosi said. “The American people are worth it.”