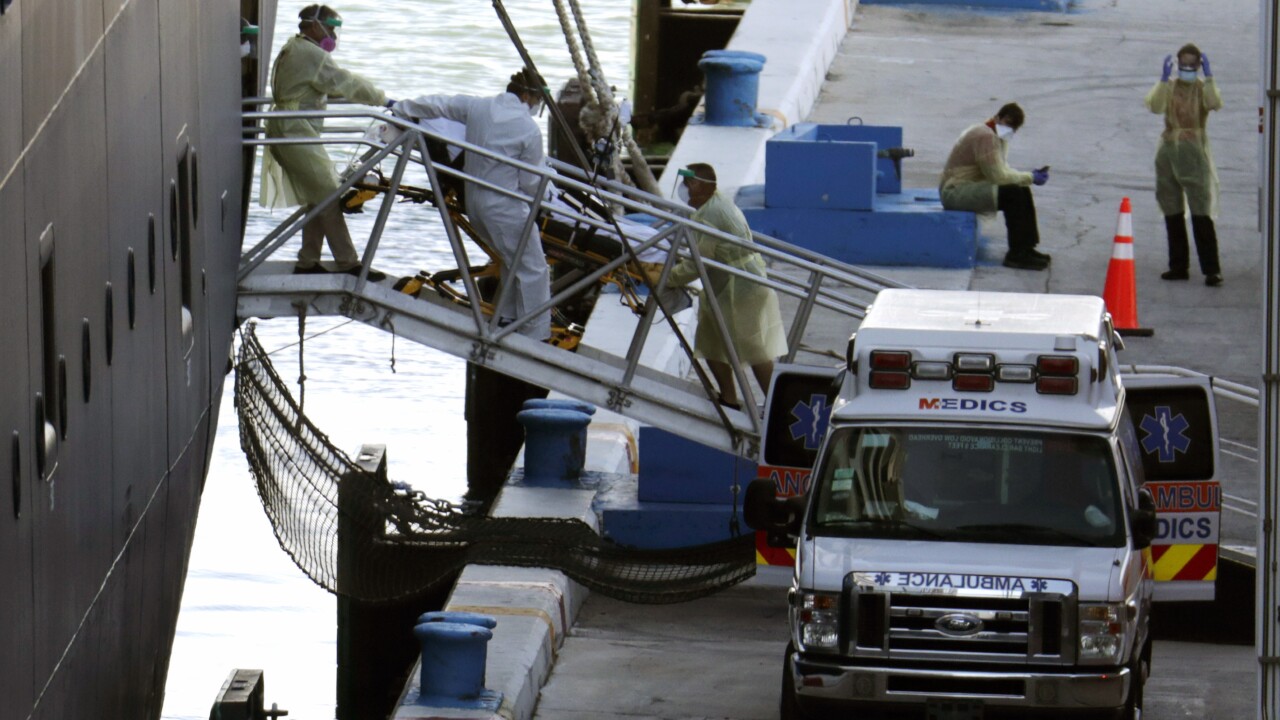 Copyright 2020 The Associated Press. All rights reserved.
Lynne Sladky/AP
A person on a stretcher is removed from Carnival's Holland America cruise ship Zaandam at Port Everglades during the new coronavirus pandemic, Thursday, April 2, 2020, in Fort Lauderdale, Fla. Those passengers that are fit for travel in accordance with guidelines from the U.S. Centers for Disease Control will be permitted to disembark. (AP Photo/Lynne Sladky)

FORT LAUDERDALE, Fla. — A cruise ship plagued by coronavirus cases and others with flu-like symptoms has finally docked in Fort Lauderdale, Florida.

Four passengers of the Zaandam died on board the ship and at least two those tested positive for the coronavirus. Many others aboard the ship experienced influenza-like symptoms, which caused the boat and its sister ship sent to help it, the Rotterdam, to be denied entry at South American ports.

The ships were given permission to unload passengers at Port Everglades on Thursday, after days of negotiations with officials who feared it would divert resources from a region with a spike in virus cases.

Since March 22, 107 guests and 143 crew on Zaandam have reported influenza-like symptoms, according to Holland America Line. The cruise line says guests have not left the ship since March 14 and have self-isolated in their staterooms since March 22.

The health of nearly 1,200 guests aboard the ships is being screened and they’re being cleared for entry by U.S. Customs and Border Protection. All passengers are expected to be off the boat by Friday evening, with priority given to those who need immediate care at local hospitals who have approved their arrival, according to the cruise line.

Guests who are fit to travel will transfer straight from the ship onto buses for transfer directly to the airport for their flights home. The majority will leave on charter flights. Florida residents will return home immediately via private car.

Guests who still have symptoms will remain on board and disembark at a later date to be finalized after they have fully recovered and meet the CDC guidelines for being fit to travel. They will continue to be cared for on board by the ships’ medical staffs.

No crew from either ship will disembark in Fort Lauderdale.

The cruise began in Buenos Aires, Argentina, on March 7 and it was originally scheduled to end in San Antonio, Chile, on March 21. Holland America says attempts were made and denied to disembark guests in Chile on March 15 and at other ports along its route to the U.S.

“These travelers could have been any one of us or our families, unexpectedly caught in the middle of this unprecedented closure of global borders that happened in a matter of days and without warning,” said Orlando Ashford, president of Holland America Line. “We are so happy to be able to get our guests home and assist those few who need additional medical services. The COVID-19 situation is one of the most urgent tests of our shared humanity, and we must do everything we can to ensure we continue to act in ways consistent with our common human dignity.