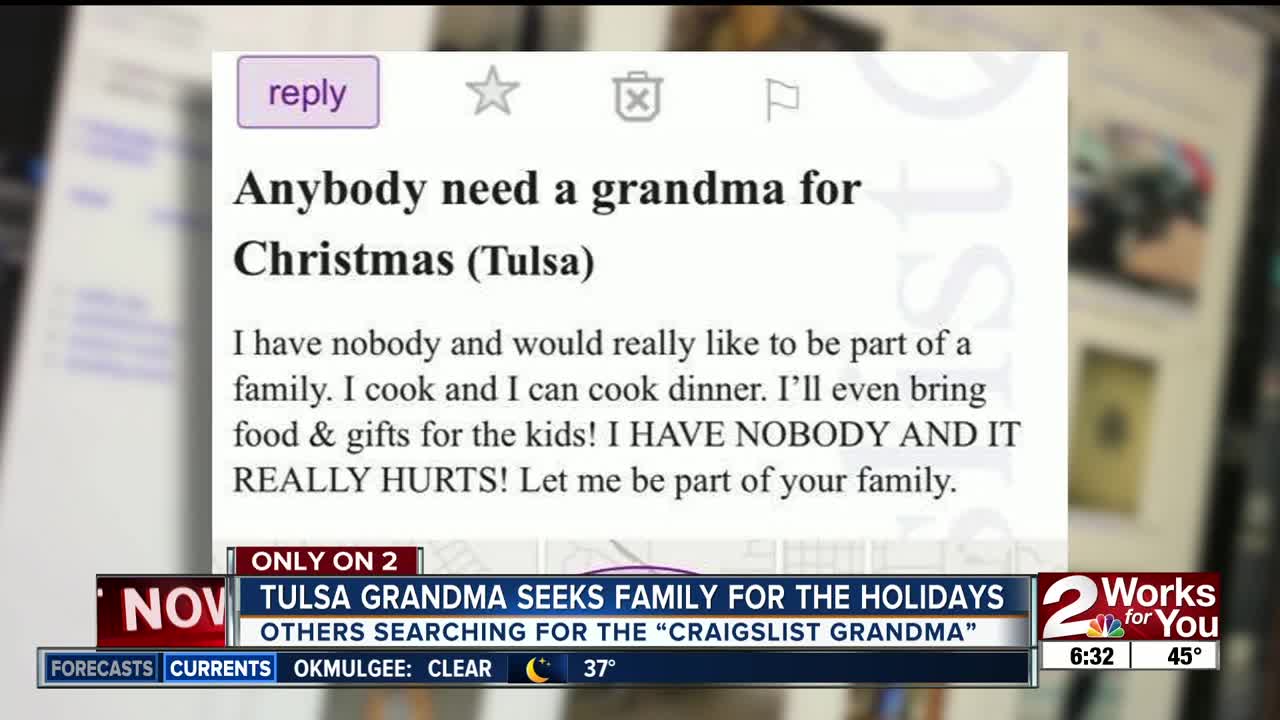 "Grandma" looking for family to spend the holidays with 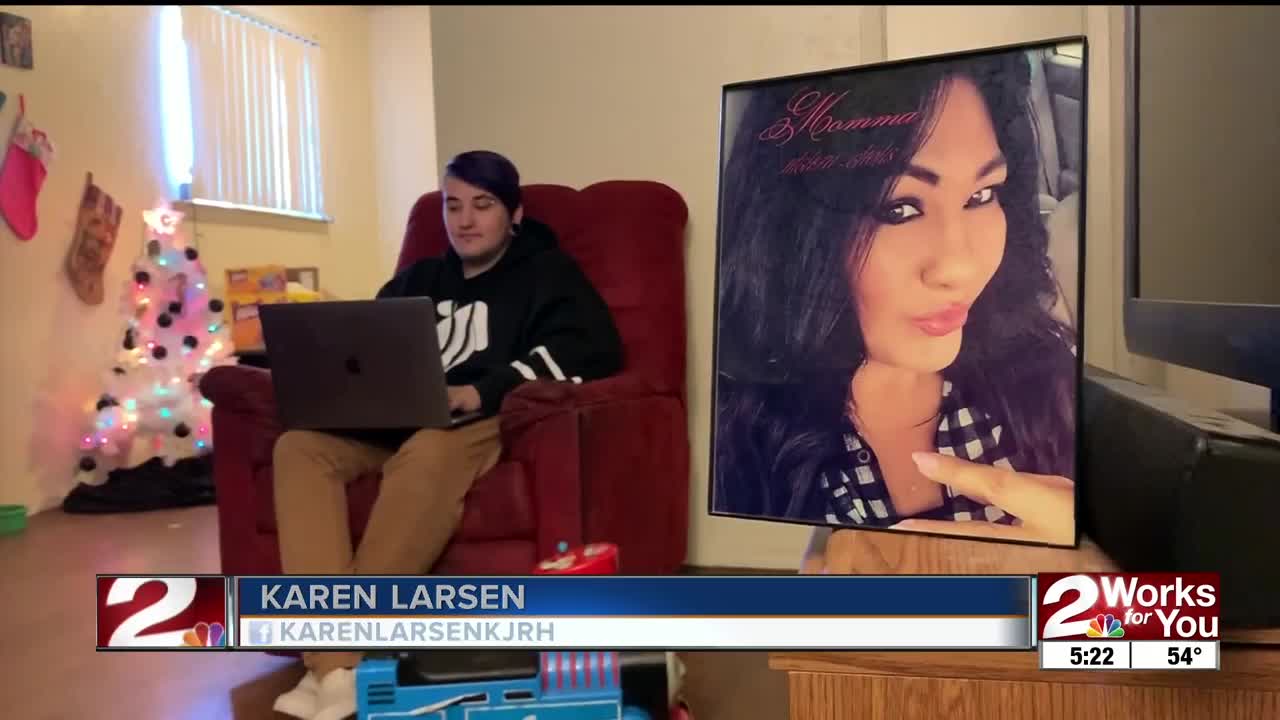 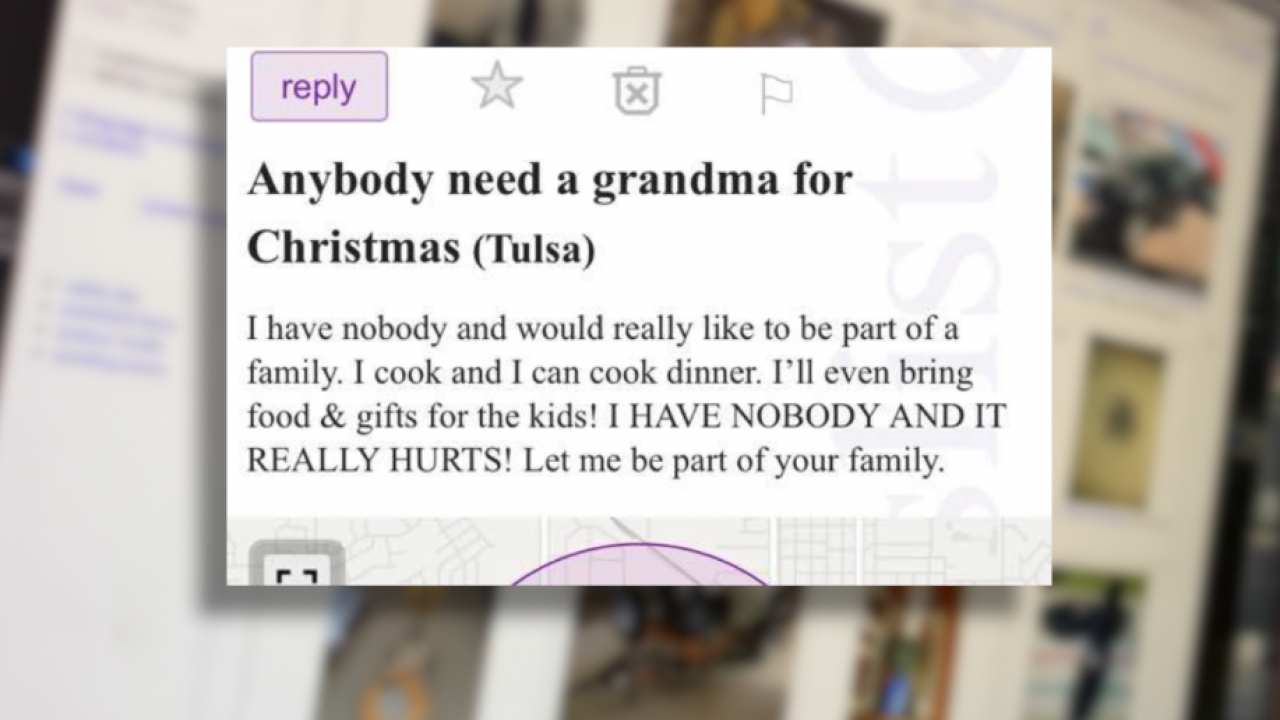 TULSA, Okla. — A post on Craigslist is pulling at heartstrings, titled, “Anybody need a grandma for Christmas?"

The listing comes from a Tulsa, Oklahoma woman in despair, who claims she has no family and would really like to be a part of one this holiday.

But, as social media would have it, the post has since been deleted when the woman received hateful messages. However, that hate is fueling a love-filled search to find the woman and make her Christmas one to remember.

It all started Wednesday evening when Carson Carlock was scouring the internet.

"I go through the free part of Craigslist pretty often just looking for stuff because sometimes people give away stuff for free,” Carlock said.

The latest ad to flash across his screen wasn’t something for sale.

The post was titled, “Anybody need a grandma for Christmas?” It goes on to say, “I cook, and I’ll cook dinner and even bring gifts for the kids. I just don't want to be alone because it hurts."

The ad ends with "Let me be a part of your family.”

It was a plea that tore at Carlock's heart, reminding him of his own mother.

"That really broke my heart reading that because my mom was alone on her last Christmas."

"She went to church a lot,” Carlock said. “She loved her grandkids."

Gail fell ill quickly, making her unable to travel from Oklahoma City to Tulsa for the holidays. Carlock tried to travel to his mom, but car troubles prevented him from making the trip.

“It was really not a good feeling just knowing, hearing her on the phone, and she's like ‘I'm all alone,’ " he said.

It’s a conversation Carlock won't soon forget. His mother died last year and her memory is one he hopes to keep alive.

"She would want me to be the kind of person to do this for other people," Carlock said.

A unique Craigslist ad, “Grandma for Christmas,” seemed like the perfect opportunity to honor Carlock’s late mother and spread a little holiday cheer. However, before he could reach out, he saw the post marred with hate.

"A lot of people started sending her hateful messages” Carlock said. “I understand that everybody can be wary about it because there's a lot of bad things happening in the world right now."

Posts accused the "grandma" of having ill intent, using the ad to take advantage of the families willing to welcome her into their home. The woman, claiming she just wanted to be a part of a family, posted an update after the negative feedback. She thanked everyone for the "extra shot of pain.” The post was then deleted.

"I don't want anyone else to feel that way,” he said.

Carlock made his own Craigslist ad, asking the "grandma needing a family,” to reach out so he could help her have a wonderful Christmas.

"I posted it, and it kind of went viral,” he said.

As of Friday morning, more than 5,000 people have shared the post on Facebook. Thousands of people across the country came to the "grandma’s" defense, ready to welcome her into their home.

"I just want you to know that you aren't alone,” Carlock said. “If you find yourself wanting to be a part of a family on Christmas, just reach out."

Carlock said he did get in contact with the "grandma" through email, her name is Carrie. However, because of all the negative feedback, she is hesitant to reach out to anyone about joining them for Christmas.

The search for Carrie continues.

This story was originally published by Cori Duke on KJRH.