Death toll from sunken migrant boat rises to more than 200 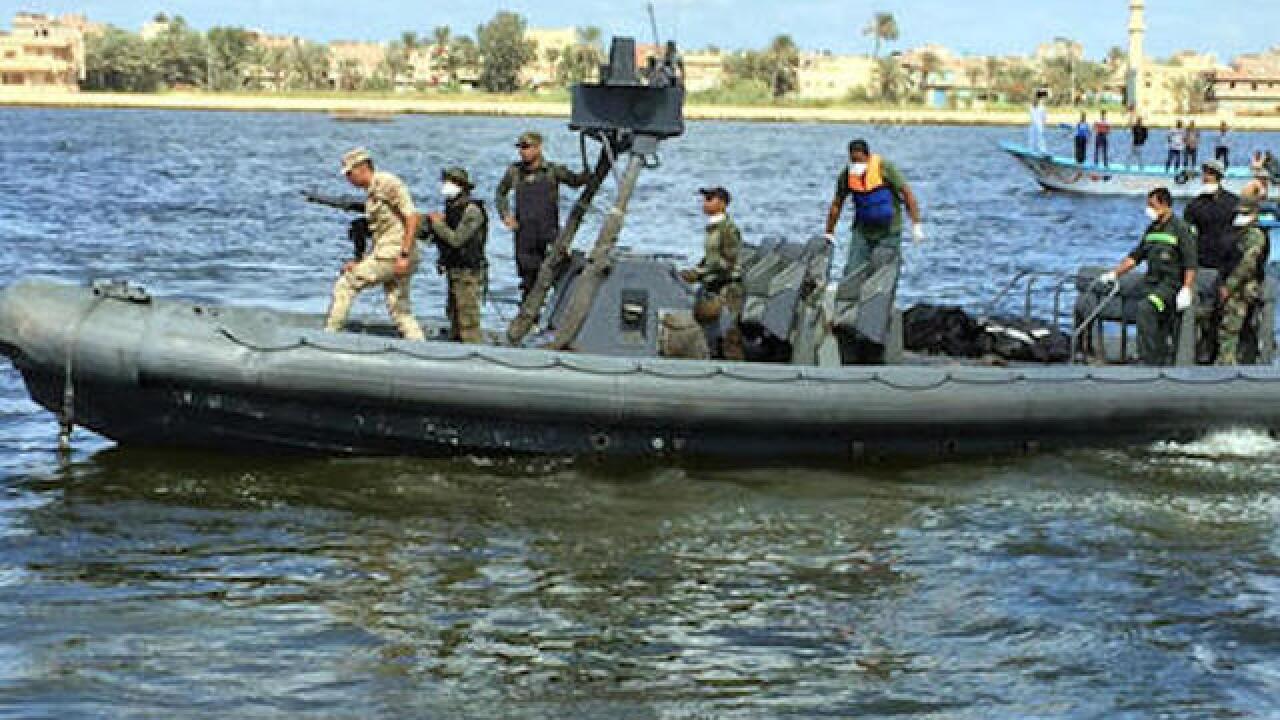 Maggie Michael
<p>Egyptian coast guard and rescue workers bring ashore bodies recovered from a Europe-bound boat that capsized off Egypt's Mediterranean coast last week, in Rosetta, Egypt, Tuesday, Sept. 27, 2016 . Dozens of bodies were pulled from the hold of the Mawkib al-Rasoul, or "Procession of the Prophet," the Egyptian fishing boat that sank carrying hundreds of migrants, bringing the toll from the disaster to more than 200 dead. (AP Photo/Maggie Michael)</p>

ROSETTA, Egypt (AP) — Rescue workers on Tuesday pulled dozens of bodies from the hold of an Egyptian fishing boat that sank in the Mediterranean Sea carrying hundreds of migrants trying to make it to Europe, bringing the toll from the disaster to more than 200 dead.

As the dead were brought to a pier outside the coastal city of Rosetta, families of the missing went through the grisly task of searching through the body bags for their loved ones. Women broke into screams and some men collapsed whenever they recognized someone, some only by their clothes because of the bodies' condition after nearly a week in the water.

For days, authorities and fishermen have been recovering bodies from the water or finding them washed up to the shore, ever since the boat capsized and sank before dawn on Sept. 21 about 12 kilometers (7.5 miles) off the Egyptian coast.

Around 160 of those on board survived, many of them spending hours in the water until rescued by local fishing boats. Families of those still missing have been camped out all week at the piers, waiting for word on their loved ones and angrily accusing authorities of not doing enough to find them.

On Tuesday, a crane vessel hauled the boat, called the Mawkib al-Rasoul, or "Procession of the Prophet," out of the mud of the seafloor so that authorities could retrieve dead trapped in the hold, including a cramped section known as the "fridge," where fishermen normally keep their catch on ice.

Authorities pulled 33 dead out of the hold, bringing the toll to 203, the head of a local municipal council, Ali Abdel-Sattar, told The Associated Press.

At the pier, emergency officials wore white medical masks against the smell of the bodies. They announced that no more bodies were found in the hold, angering relatives of those who still had not been found, many of whom were convinced from earlier reports that more dead were in the hold.

A woman whose two sons were on the boat found one of them, 18-year-old Ahmed, among the bodies brought to the pier. She said he no longer had a face after the days in the water.

"Only his clothes showed that it's him," she said. She spoke on condition of anonymity because she feared harassment by police.

But her other son was still missing.

The boat was overcrowded with hundreds of people, but the exact number is not known, with estimates from officials ranging from 400 to 600. Most were believed to be Egyptians, many of them young men from poor villages in the Nile Delta, with some others from Sudan or other African countries, and at least one Syrian woman whose body was found washed ashore.

The sea route from Egypt to Europe has become increasingly popular for migrants. This year, more than 12,000 migrants arrived in Italy from Egypt between January and September, compared to 7,000 in the same period last year, according to the EU border agency Frontex. Egyptian authorities have so far in 2016 foiled 110 attempts to smuggle migrants to Europe.

One survivor, a 17-year-old, from the nearby village of al-Gazira al-Khudra, said he and several of his friends were brought out on a smuggler boat with about 150 people and transfered onto the Procession of the Prophet, which he said was already swelling with about 300 people.

"It was full from top to bottom. There was not an empty centimeter," he said, speaking on condition of anonymity for fear of harassment by police.

When the boat started to capsize, he said he jumped into the water and swam away from the vessel.

He said the screams from the boat still rang in his ears.

"From 4:00 a.m. to 9:30 a.m., it was foggy and dark. I kept swimming, searching for land but couldn't find it," he said. He saw a friend in the water, clinging to a plastic bottle. "Suddenly he disappeared. I looked and only saw the bottle," he said. He was rescued by fishermen.

Another survivor, Aboud, said he was originally put in the "fridge" when he was brought on the boat. But one of his friends pulled him out, meaning he could jump to safety when it began to sink. Nine of his friends died, he said.

He estimated he saw about 150 people in the "fridge," but his account could not be independently confirmed. He spoke on condition he be identified only by his first name for fear of harassment by police. After his rescue by fishermen, he was taken to the police station where he said he was beaten.

He said this was his second attempt to make it to Europe and vowed to try again, citing poverty in Egypt.

"I will go once, twice, three times. We are dead anyway," he said. "Here they deal with us like animals. There, animals have rights."

The military said in a statement that it had rescued more than 160 survivors. But survivors and family members all said the rescues were carried out by local fishermen, further stoking anger that authorities were not doing enough.

Hamed Hassan said his cousin's body was found by fishermen. "From across Egypt, they can leave in boats. Where is the coast guard?" he said.

Samir Qlamosh, a local fisherman, has become a hero in Rosetta, touted in social media after he rescued 96 survivors in his boat. He said that the morning after the sinking, he was returning to the pier and was told by officials to go out and search.

He searched for 90 minutes until finally officials sent him the coordinates of the site. Once there, he found survivors in the water and fished them out with ropes, he said.

"We got there after people were already worn out. Some couldn't even hold the rope. Some were dying," he told the AP. "I am not coast guard, I'm a fisherman. We need an operation room here to rescue people."