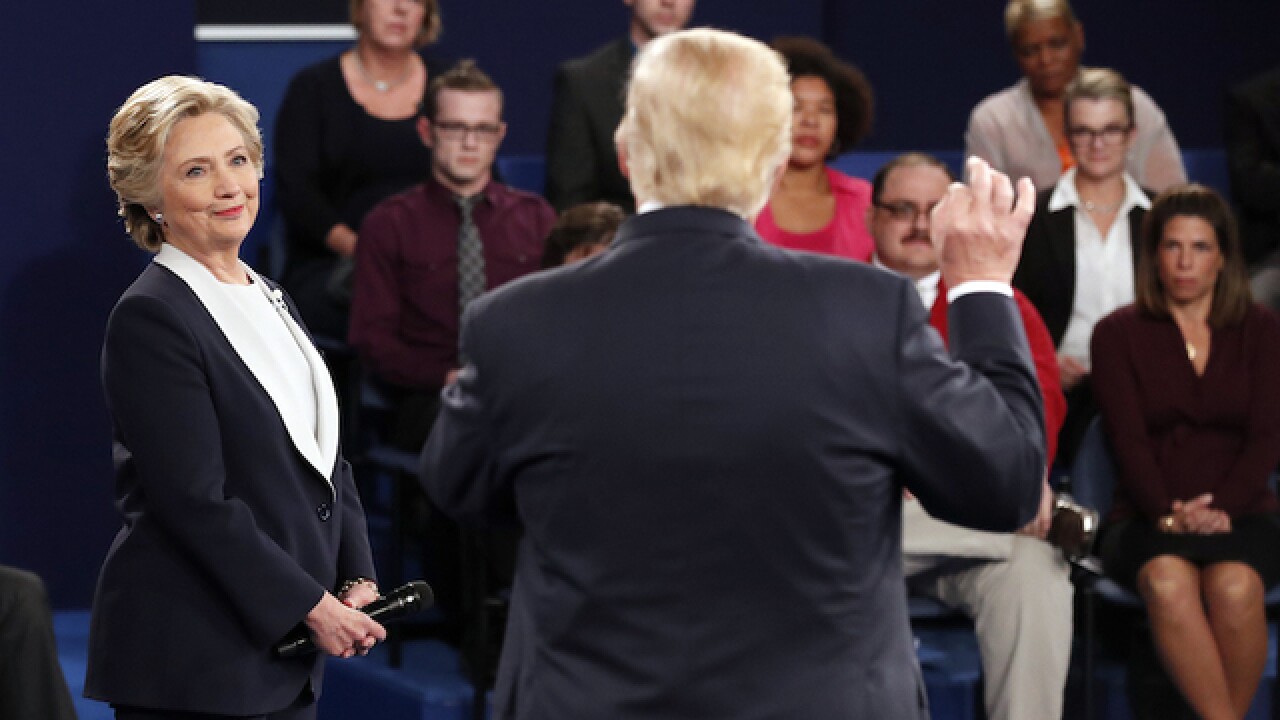 Donald Trump mischaracterized the record on Hillary Clinton's defense of her husband and her own treatment of women when he brought up Bill Clinton's sexual history and other episodes of the past. Clinton didn't give a square account of the fallout from her email practices.

A look at some of the claims in the second presidential debate:

TRUMP, asked whether the predatory behavior with women that he described in a 2005 video amounted to sexual assault: "No, I didn't say that at all."

THE FACTS: He certainly didn't own up to sexual assault in his boastful remarks in 2005. But he clearly described groping and kissing women without their permission, using his celebrity to impose himself on them.

He described a specific sexual advance toward a married woman. "I moved on her like a bitch. But I couldn't get there."

TRUMP on Hillary Clinton's behavior when, as a young public defender, she was assigned to represent an accused child rapist: "She's seen on two separate occasions, laughing at the girl who was raped. Kathy Shelton, that young woman, is here with us tonight."

THE FACTS: At no point was Clinton seen laughing at the victim.

In 1975, at the age of 12, Shelton was sexually assaulted in Northwest Arkansas. Clinton was asked by a judge overseeing the case to represent her alleged attacker. After the prosecution lost key evidence, Clinton's client entered a plea to a lesser charge.

In an interview a decade later, Clinton expressed horror at the crime, but was recorded on tape laughing about procedural details of the case. The audio has been seized on by conservative groups looking to attack Clinton's presidential candidacy but does not convey mirth at the girl's fate.

THE FACTS: There is no clear, independent evidence that Hillary Clinton "viciously" attacked women who alleged or confirmed sexual contact with her husband.

To be sure, in the 1992 Democratic primaries, she was deeply involved in the Clinton campaign's effort to discredit one accuser, actress Gennifer Flowers, who alleged she had a long-running affair with Bill Clinton. Both Clintons acknowledged past troubles in their marriage but sought to undermine Flowers' claims. Bill Clinton later acknowledged in a 1998 court deposition that he had a sexual encounter with Flowers.

Hillary Clinton was also quoted over the years making disparaging comments about other women linked with her husband.

What is lacking is proof that she engineered efforts to smear their reputation. Diane Blair, a political science professor and long-time Hillary Clinton friend who died in 2000, left behind an account of private interviews with Hillary Clinton in which she told her during the Monica Lewinsky affair that she considered the former White House intern a "narcissistic loony toon."

THE FACTS: Maybe, maybe not. While there's indeed no direct, explicit evidence that classified information was leaked or that her server was breached, it was nevertheless connected to the internet in ways that made it more vulnerable to hackers — and the public may never know who saw them. FBI Director James Comey has said: "We assess it is possible that hostile actors gained access to Secretary Clinton's personal e-mail account."

The Associated Press previously discovered that her private server, which has been a major campaign issue for Clinton and the focus of U.S. investigations, appeared to allow users to connect to it openly over the internet and control it remotely. That practice, experts said, wasn't intended to be used without additional protective measures, and was the subject of U.S. government warnings at the time over attacks from even amateur hackers.

Since the AP in early 2015 traced her server to her home in Chappaqua, New York, Clinton hasn't fully explained who administered her server, if it received software updates to plug security holes or if it was monitored for unauthorized access. It's also unclear what, if any, encryption software Clinton's server may have used to communicate with official U.S. government email accounts.

Comey has said Clinton and her staff "were extremely careless in their handling of very sensitive, highly classified information." But he said the FBI won't recommend criminal charges against Clinton for use of the server while she was secretary of state and closed the investigation.

TRUMP: "We have to be sure that Muslims come in and report when they see something going on... As an example, in San Bernardino, many people saw the bombs all over the apartment of the two people that killed 14 and wounded many, many people... Muslims have to report the problems when they see them."

THE FACTS: There's no evidence that Muslims failed to report suspicious activity.

The FBI works closely with the Muslim community and encourages people to report possible criminal activity.

In San Bernardino, California, a Muslim couple shot and killed 14 people at an office party in December 2015. The couple was killed in a police shootout. But the FBI has never suggested that people from the Muslim community — or anyone else — failed to alert authorities of bombs in the couple's home.

THE FACTS: Trump's facts are, at best, jumbled. In 1998, lawyers for Bill Clinton settled with former Arkansas state employee Paula Jones for $850,000 in her four-year lawsuit alleging sexual harassment. It was not a fine, and there was no finding or admission of wrongdoing.

Trump erred in describing the legal consequences of that case. In a related case before the Arkansas State Supreme Court, Clinton was fined $25,000 and his Arkansas law license was suspended for five years. Clinton also faced disbarment before the U.S. Supreme Court but he opted to resign from the court's practice instead of facing any penalties.

CLINTON: "We are now, for the first time ever, energy independent."

THE FACTS: Clinton inaccurately overstates the case. For the first time in decades the United States gets more energy domestically than it imports, but it is not yet energy independent as the country continues to rely on oil imports, from the Mideast and elsewhere. Estimates vary as to when the U.S. might achieve energy independence.

While Clinton's health care proposals would expand the government's role in the health care system, she's not talking about dismantling the current system, which is a hybrid of employer-sponsored coverage, government programs like Medicare and Medicaid, and individually purchased insurance.

As president, Clinton would push for a government-sponsored insurance plan in the health care markets created by President Barack Obama's health care law, as an alternative to private insurance. But those markets currently cover about 11 million people, while about 155 million have job-based coverage.

In excerpts from Clinton's paid speeches she gave behind closed doors, though, she did praise Canada's universal coverage and said that single-payer systems were "as good or better" when it came to basic medical care. But she also noted drawbacks of such health care systems, such as longer wait times for procedures.

TRUMP: "I would not have had our troops in Iraq."

THE FACTS: Trump actually offered lukewarm support for invading Iraq before the war began. He's repeatedly and erroneously claimed to have come out against the war before it started, telling Howard Stern in September 2002: "Yeah I guess so," when asked if he would back an invasion.

This time, his claim was slightly different — that if he had been president at the time, he would not have invaded. It's conceivable, at least, that he would have taken a position in office at odds with his stance as a private citizen. A few months before the March 2003 invasion, he did tell Fox News that the economy and threats from North Korea posed greater problems than Iraq.

THE FACTS: Only partially true. Syria's President Bashar Assad considers the Islamic State group to be among numerous "terrorist" groups that threaten his government. His overstretched military is mainly focused on combating Syrian opposition groups, some of which are supported by the United States. Assad does use air power against IS-held areas and his ground forces are engaged in fighting with the extremists in Deir el-Zour in the east.

TRUMP, asked whether he had ever sexually assaulted a woman: "No, I have not."

THE FACTS: He's been accused of it but a case has not been proved.

Trump's first wife, Ivana Trump, accused him of rape in a deposition in the early 1990s. She later said she didn't mean it literally, but rather that she felt violated. Trump was also sued for sexual harassment in 1997 by Jill Harth, a woman who, along with her romantic partner, was pitching Trump to get involved in a pin-up competition in the early 1990s.

In a recent interview with The New York Times, Harth said Trump ran his hands up her skirt during dinner in 1992, and on another occasion, she said Trump tried to force himself on her in his daughter Ivanka's bedroom. "Next thing I know he's pushing me against a wall and has his hands all over me," Harth told the newspaper. Harth dropped her harassment lawsuit against Trump after he settled a separate breach of contract lawsuit. Trump has denied Harth's allegations.

CLINTON: "He would end up raising taxes on middle-class families"

THE FACTS: Clinton is not raising taxes on "everybody." Nearly all of Hillary Clinton's proposed tax increases would affect the wealthiest 5 percent of Americans, according to the nonpartisan Tax Policy Center.

Trump is proposing massive tax cuts for both individuals and businesses. Yet it's not clear that all Americans would benefit. The conservative Tax Foundation estimates that the bottom 80 percent of taxpayers would see their after-tax income rise from 0.8 percent to 1.9 percent. The wealthiest 1 percent would see their after-tax incomes rise at least 10.2 percent to 16 percent.

Yet Clinton may be right that Trump's proposals would increase taxes on many middle- and lower-income families. Trump's plan eliminates the personal exemption, which currently allows households to reduce their taxable income by $4,050 for each member of the household, including children. He would replace that with higher deductions, but for many single parents and families with three or more children, the standard deduction wouldn't be large enough to offset the loss of personal exemptions.

THE FACTS: Yes it was. Trump tweeted "check out sex tape and past" of former 1996 Miss Universe Alicia Machado, a woman whom Clinton discussed in the first presidential debate as an example of Trump's derogatory comments about women.

Machado has publicly supported Clinton and criticized Trump for body-shaming her by calling her "Miss Piggy" and threatening to take away her crown for gaining weight.

The video Trump appeared to be referring to was from a Spanish reality show. In 2005, Machado, who was a contestant on the show, was filmed in bed, under the covers with a male contestant and speaking sexually about his body parts. The grainy footage doesn't show nudity, though Machado has said that she was having sex in the footage.

CLINTON: "If we repeal (Obama's health care law) as Donald has proposed, all of those benefits I have mentioned are lost to everybody...and then we will have to start all over again."

THE FACTS: Clinton is essentially correct. Congressional Republicans have promised their replacement plan for Obama's health care law would provide coverage for the uninsured, but they have not provided enough detail to allow a rigorous comparison. A complete repeal of the health care law would wipe the slate clean and lawmakers would have to start over.

Republicans have expressed support for some goals of the health care law, such as assuring that people with health problems can get coverage, but whether a GOP replacement plan would work as well remains to be seen. Trump's own plan was recently evaluated by the Commonwealth Fund and the RAND Corporation, and the analysis found would increase the number of uninsured people by about 20 million.