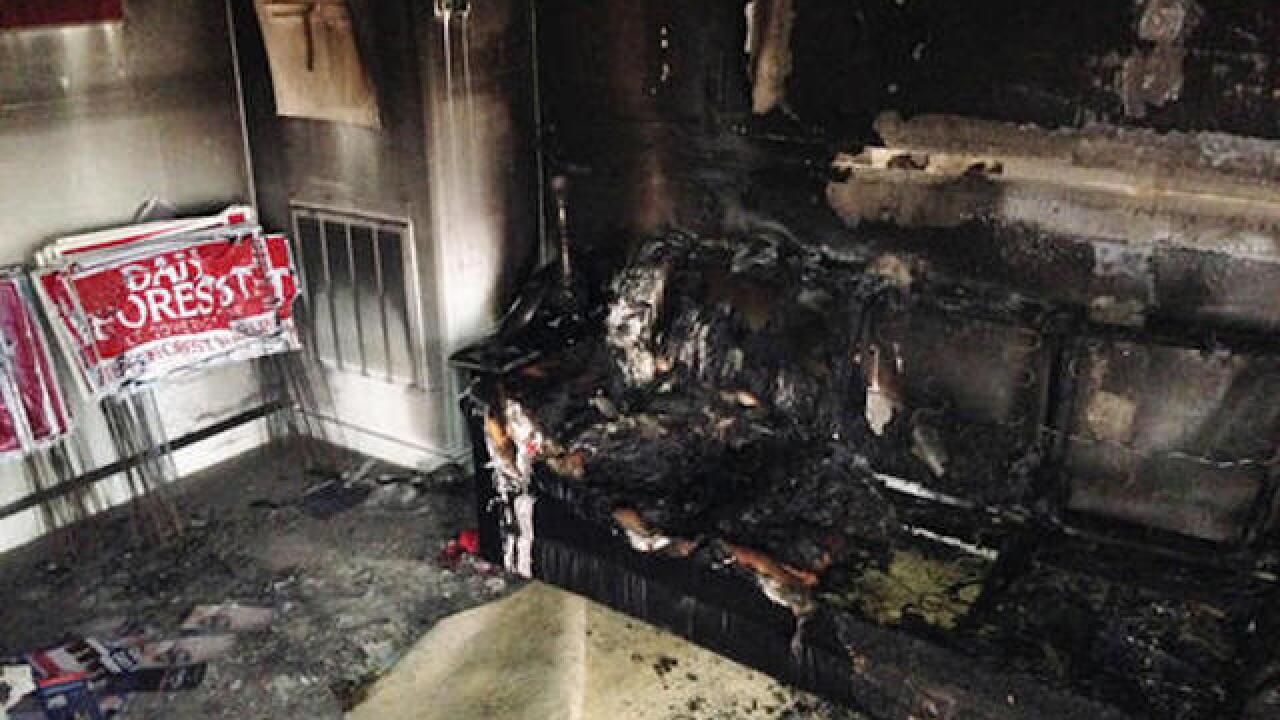 Copyright Associated Press
Jonathan Drew
<p>/// A burnt couch is shown next to campaign signs at the Orange County Republican Headquarters in Hillsborough, NC on October 16 2016. Authorities say someone threw flammable liquid inside a bottle through a window. (Ap photo / Jonathan Drew) DQoNCg0KU2VudCBmcm9tIG15IGlQaG9uZQ==</p>

HILLSBOROUGH, N.C. (AP) — Investigators combed through shards of glass, looked for residue of flammable accelerant and tried to narrow down the overnight hours when someone torched a local Republican Party office by throwing a flammable device through the window.

The mayor said he wasn't aware of any surveillance footage from the immediate vicinity, and the office sits where there wouldn't normally be foot traffic late at night — in a decades-old retail complex that backs up to a wooded area and is set back from a main road.

A bottle filled with flammable liquid was thrown through the window of the Orange County Republican Party headquarters early Sunday, damaging the interior before burning out, according to authorities. Someone also spray-painted "Nazi Republicans leave town or else" on a nearby wall. The office was empty and no one was injured.

Local party officials reopened a makeshift operation on folding tables outside the office Monday while uniformed police looked on. Plainclothes investigators looked for evidence at the scene as state, local and federal investigators divided up leads.

The graffiti and remnants of the fire were discovered Sunday morning by 68-year-old Bobbie Sparrow, whose Balloons Above Orange shop is next to the GOP headquarters. She came to feed stray cats before church when she noticed the graffiti.

"I saw the hate in it. And the only reason they used the side of my building, because it was a blank canvas for a message to the Republican Party people," she said in an interview. "I picked up my cellphone and called 911 and told them someone needed to get here immediately."

"I don't see any flames, but it has smoked up outside the window and there is a strong smell of smoke," she says on the tape. "They obviously threw something flaming through the window at the Republican Party, and I'm not sure what kind of damage is inside. I'm not about to go look."

County GOP chairman Daniel Ashley arrived Sunday morning to find the area roped off by yellow police tape. He said he believes whoever's responsible intended to burn down the building.

"I definitely think the reason they spray-painted that building there was because they thought this one wouldn't be here," he said, standing in front of his office.

Lost in the fire were 2,000 sample ballots for local Republicans, dozens of yard signs that were melted and banners for events that were ruined by soot, he said.

The violent act in the key battleground state has been condemned by public figures across the political spectrum.

A tweet from Democratic presidential nominee Hillary Clinton on Sunday said the attack "is horrific and unacceptable. Very grateful that everyone is safe." An hour later, Trump tweeted: "Animals representing Hillary Clinton and Dems in North Carolina just firebombed our office in Orange County because we are winning."

Democrats started a campaign to raise $10,000 to reopen the GOP office, meeting the goal in less than 40 minutes and "showing that Americans are thirsty for civility and decency," wrote the GoFundMe drive's creator, David Weinberger, a researcher at Harvard University.

"It's a great gesture. We appreciate it a lot, but I don't know how much of that we're going to get to use because of the campaign laws," Ashley said Monday.

Earnest says in a season heated by political rhetoric that neither side benefits from vandalism and violence.

"It is a miracle that nobody was killed," he said in an interview.

The walls of the multi-room office were covered in black char, and a couch against one wall had been burned down to its springs. Shattered glass covered the floor, and melted campaign yard signs showed warped lettering.

Stevens, mayor of the town about 40 miles northwest of Raleigh, said the act doesn't represent the character of Orange County, which also includes Chapel Hill and the University of North Carolina campus. Registered Democrats outnumber Republicans 3-1 in the county.

Blake Halsey, a 21-year-old college student who volunteers at the Orange County GOP office, answered calls Monday at a folding table outside the shattered front window. He grew up in the area and described the town as a "melting pot" for all political views.

He said the attack made him think about his personal safety because he's worked after-hours recently at the office.

"It's sad to see America go this way," he said. "The Constitution says we have free speech. But free speech does not mean you can throw a fire bomb in there."