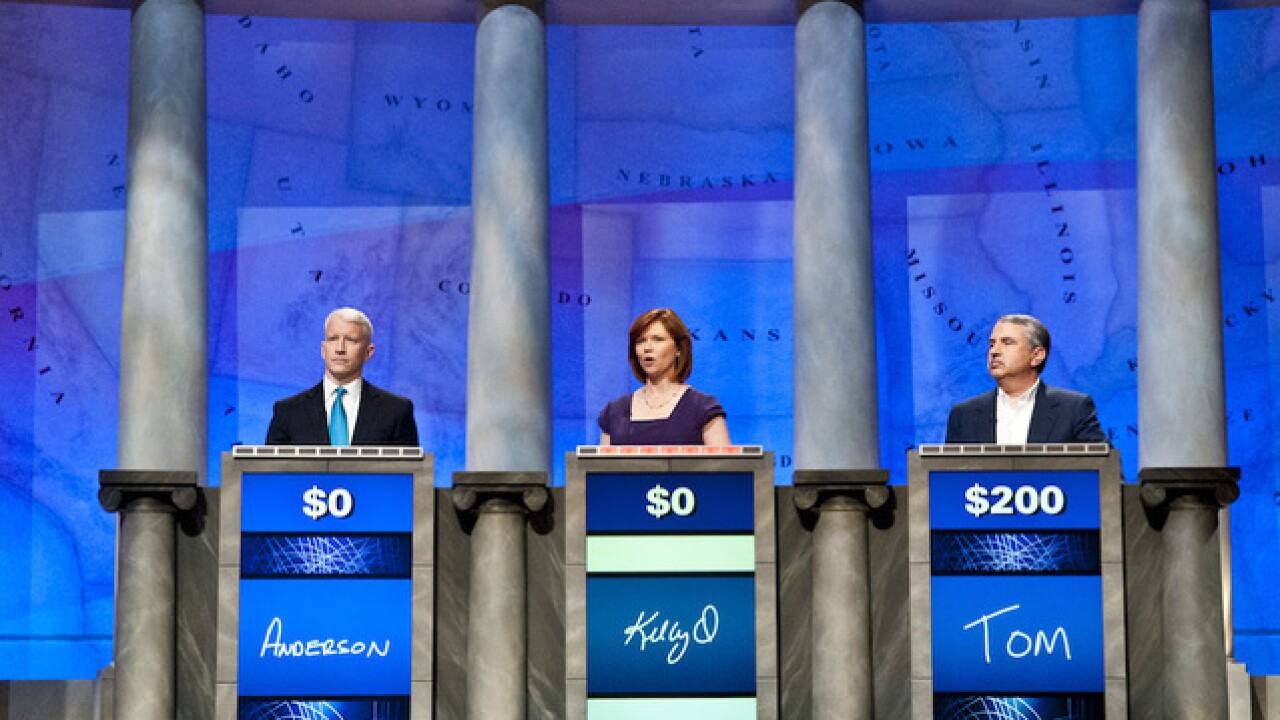 Image copyright 2012 Getty Images. All rights reserved. This material may not be published, broadcast, rewritten, or redistributed.
Kris Connor
<p>Anderson Cooper, Kelly O'Donnell and Thomas L. Friedman speak during a rehearsal before a taping of Jeopardy! Power Players Week at DAR Constitution Hall on April 21, 2012 in Washington, DC. </p>

If you're trying to avoid political ads in the closing days of the campaign, you might want to avoid morning shows and daytime TV. Using data provided by the data firm Kantar Media / CMAG, Cover/Line looked at the TV shows that have aired the most political ads in 2018 as of October 30, about how much was spent to air them, and who aired the most.

The top buyers for these shows were all either the Republican PAC Congressional Leadership Fund, the Democratic group Senate Majority PAC, or Sen. Jon Tester, a Montana Democrat whom President Trump has campaigned to replace with Republican Matt Rosendale and who was able to air more ads on top shows for a much lower rate in Montana.

10. "The Late Show with Stephen Colbert"

Stephen Colbert talks about politics frequently on his CBS show and has had several current and former politicians on in recent months, including Hillary Clinton, Bernie Sanders, Beto O'Rourke and Cory Booker.

CBS's "The Big Bang Theory" was the second biggest show on TV this year, behind only "Roseanne," with 18.7 million average viewers, according to Nielsen.

Senate Majority PAC bought 6.32% of all political ads on "Family Feud," the highest percentage of any show on the list. Hosted by Steve Harvey, the show premiered its 20th season in September.

"Jeopardy" host Alex Trebek tried his hand at politics this year, moderating the Pennsylvania gubernatorial debate. He called it a "learning experience" and said he was "naive going into" the debate. Trebek will host the game show through at least 2022.

Phil McGraw signed a deal with CBS this year to extend his show through a 21st season in 2023. The host told Colbert last month the Trump administration's proposal to define gender was "the absolute height of arrogance."

"Wheel of Fortune" is the top game show on the list and the most expensive one, with an estimated cost-per-ad of $1,359.

"Judge Judy" is the top daytime show on the list, and managed to air more ads than "Wheel of Fortune" despite being estimated to cost about three times less.

The number of ads jumps up when you get into the top three, which are all network morning shows. Of the three, NBC's "Today" show is the most expensive of three morning shows, with an estimated cost per ad of $676.

CBS's morning show typically trails its competitors in the ratings, but it tops the list of political ads, airing more than 53,000. Tester has aired 2,496 ads on the show, more than any other candidate or group on any show on the list.