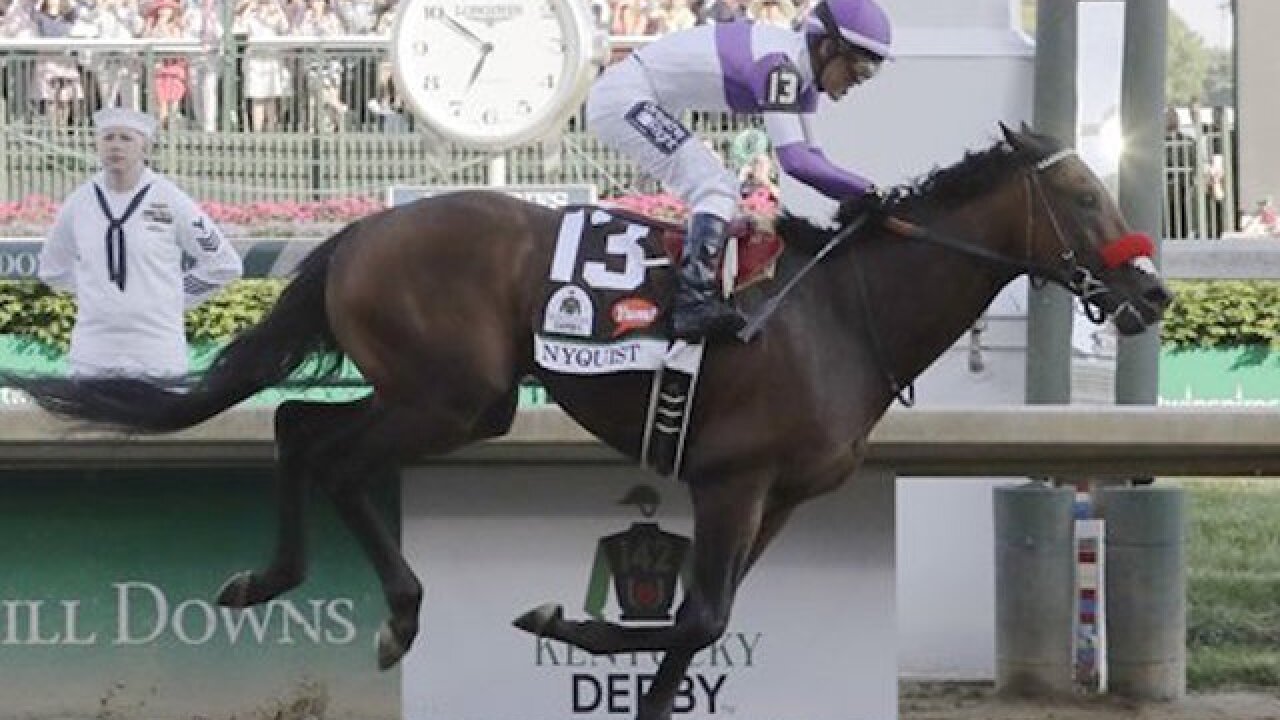 NEW YORK (AP) — So much for a rematch in the Belmont Stakes.

Kentucky Derby winner Nyquist won't run in the final leg of the Triple Crown after developing a fever and having an elevated white cell count, trainer Doug O'Neill said Tuesday.

"He's out because of sickness," O'Neill said.

Any thoughts of a second straight Triple Crown were wiped out in the Preakness last Saturday when Exaggerator finally defeated Nyquist after four previous losses.

A rematch in the Belmont on June 11 would have been the next best thing to a Triple Crown attempt. Last year, American Pharaoh became the first horse in 37 years to sweep the Derby, Preakness and Belmont.

"He's fine, but he's got an elevated white blood cell count," O'Neill's assistant Jack Sisterson said from Pimlico Race Course in Baltimore, where Nyquist is recovering. "We just want to do right by him and get him 100 percent."

Nyquist came into the Preakness unbeaten in eight races, including a 1 1/4-length win over Exaggerator in the Derby. Exaggerator turned the tables in the Preakness, winning by 3 1/2 lengths over a sloppy track with Nyquist finishing third.

On Monday, Nyquist had a temperature of 102 and blood work was done. The results were delivered on Tuesday.

"Sometimes it happens when a horse runs back quick," Sisterson said, referring to the short two-week turnaround between the Derby and Preakness. "For races like these, horses have to be on top of their game, Unfortunately, there'll be no Belmont."

Once Nyquist recovers, he will be shipped back home to California, with a plan that could include a trip to Saratoga for the Travers Stakes.

This is not the first time Nyquist has been sidetracked. After winning the Florida Derby on April 2, the colt owned by J. Paul Reddam was shipped to Keeneland in Lexington, Kentucky. His return to training was delayed by an elevated white blood cell count. At that time, he had no fever, was back on the track in a few days and went on to win the Derby on May 7.

In 2012, O'Neill's Derby and Preakness winner I'll Have Another was retired the day before the Belmont with a tendon injury and missed a Triple Crown chance.

Without Nyquist, the 1 1/2-mile Belmont loses some of its luster, but Exaggerator can expect to take on a number of rivals from the Derby and Preakness. Among them are Preakness runner-up Cherry Wine and fifth-place finisher Lani, Suddenbreakingnews (fifth in the Derby), Destin (sixth, Derby) and Brody's Cause (seventh, Derby). Governor Malibu, runner-up in the Peter Pan at Belmont on May 14, also is Belmont bound.