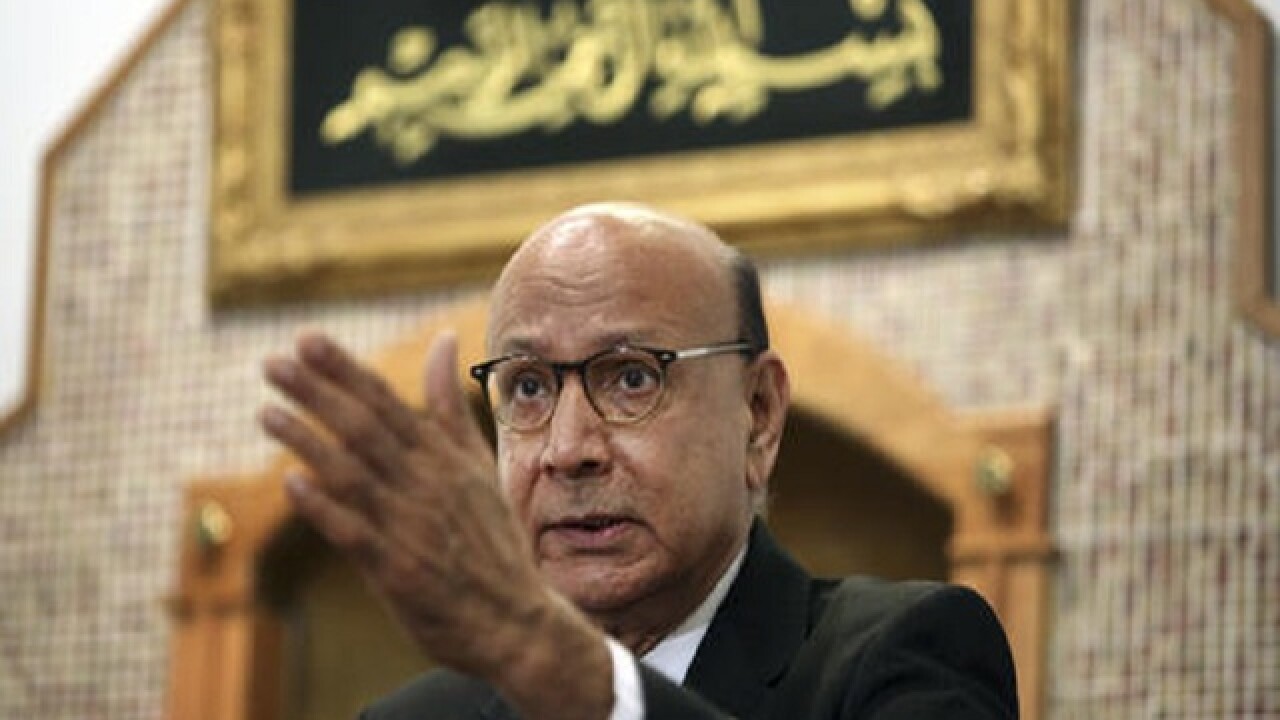 NORFOLK, Va. (AP) — Khizr Khan, a Muslim-American whose son was killed in Iraq, held back tears Wednesday as he again took on Donald Trump, saying the Republican presidential nominee is peddling hate and no less than the "future of the earth" is at stake in the Nov. 8 election.
"There comes a time in an ordinary citizen's life where you have to gather all the courage you have and you stand up and speak against tyranny and speak against un-American hate," Khan said in a reference to Trump's stance on immigration, which has ranged from a complete ban on foreign Muslim immigrants entering the United States to "extreme" vetting and an ideological test for would-be immigrants from countries and regions plagued by extremism.
"This hate," Khan said at the Masjid William Salaam mosque, "is un-American."
Trump fired back with a familiar refrain, telling ABC News that Khan's son, who died in Iraq trying to protect his unit from a suicide bomber, would still be alive had Trump been president in 2004 instead of Republican George W. Bush.
"I wouldn't have been in Iraq," Trump said, once again falsely insisting he was opposed to the Iraq War before it started. "Had I been president, Capt. Khan would be alive today."
Fumed Khan, "This is the most cruel thing you can say to grieving parents."
Khan first gained national attention from the podium of the Democratic National Convention when he paid homage to his son, Army Capt. Humayun Khan, who died in Iraq in 2004. Khan held up his pocket-sized Constitution and said Trump has sacrificed "nothing."
The elder Khan's Norfolk visit comes after a new Hillary Clinton campaign ad that features him tearfully discussing his son's death. The campaign said last week that it would air the ad in seven battleground states.
Trump won most of the southeastern cities and counties along the James River in Virginia's March 1 Republican primary. And a survey of the nation's service members conducted last month by the Military Times and Syracuse University showed Trump slightly leading Libertarian candidate Gary Johnson, 37.6 percent to 36.5 percent. Clinton had 16.3 percent of their support.
Trina Phillips, chair of Military Spouses for Trump, told The Associated Press in a phone interview that her candidate has widespread support.
"I think the Khans have come out and used their Muslim background as a weapon to make him seem more prejudiced against them," said Phillips, 46, who lives in nearby Newport News with her husband, an air traffic controller in the Air Force.
"They're also using the death of their child as a weapon," she said. "And that's not very fair."
But Khayriyyah Azeez, 63, a retired nurse from Norfolk, said she sees support for Clinton. Her son, Kasib Azeez, is a Navy sailor who prayed with Khan at the mosque after Wednesday's speech.
"It's easy to fall for some of the stuff Trump says," Azeez said. "But when I speak to my son, most of the young people (in the military) are voting for Hillary."
Speaking to the AP after his speech, Khan said the mosque was an appropriate place to stump for Clinton.
"Somehow it has gotten into our minds that places of worship should not be included in your political conversation. Not at all," he said. "This election is a crossroad election for the future of this country."
Copyright 2016 The Associated Press. All rights reserved. This material may not be published, broadcast, rewritten or redistributed.