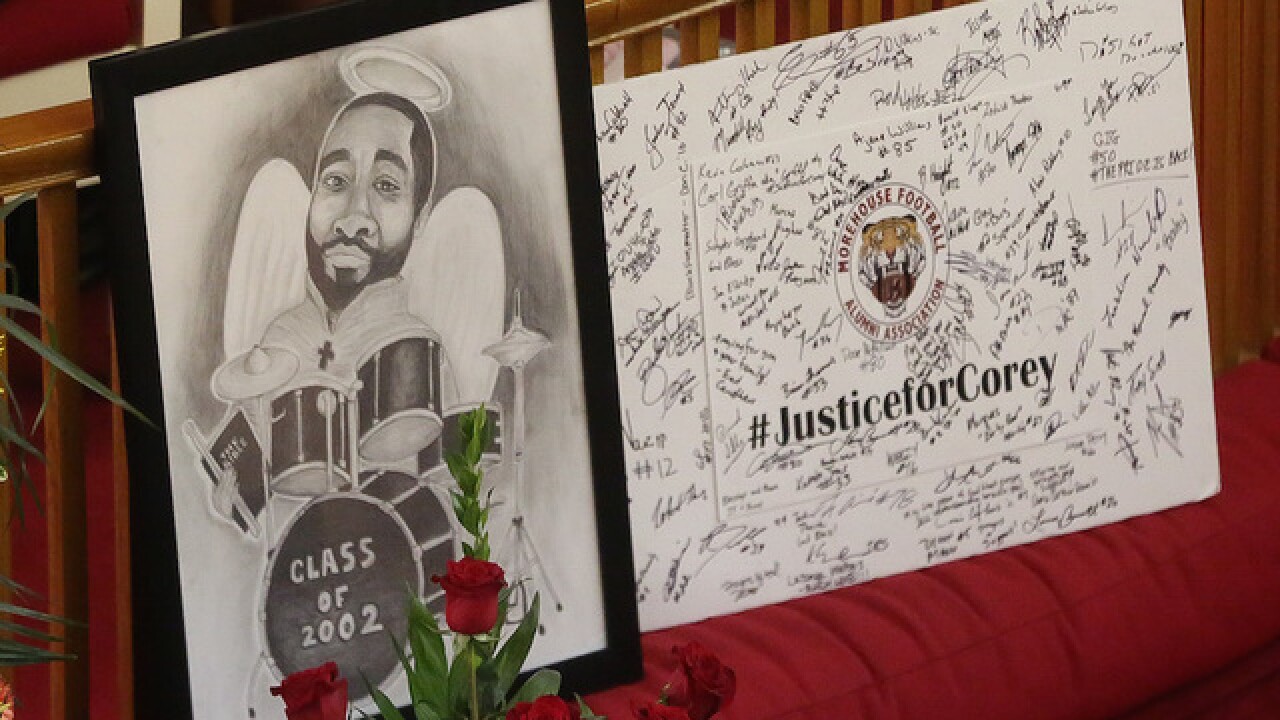 Copyright Getty Images
Pool
<p>WEST PALM BEACH - OCTOBER 31: In this handout photo provided by the Palm Beach Post, signs are displayed at the front of the church during the funeral held for Corey Jones at Payne Chapel AME at Payne Chapel AME Church October 31, 2015 in West Palm Beach, Florida. Jones was shot and killed by a plainclothes police officer, Nouman Raja, on Interstate 95 on October 18th. (Photo by Damon Higgins-Pool/Getty Images)</p>

WEST PALM BEACH, Fla. (AP) — A fired Florida police officer was arrested and charged Wednesday with manslaughter and attempted murder in the fatal shooting of a legally armed black musician after prosecutors say an audio recording and physical evidence show the musician had thrown his weapon to the ground and was running away when the lethal round was fired.
Prosecutors also allege that the recording shows Palm Beach Gardens Officer Nouman Raja misled investigators and lied to a 911 operator to make it appear that Corey Jones, 31, was still armed and a threat more than 30 seconds after he had been felled by the officer's bullets last Oct. 18.
Palm Beach County State Attorney Dave Aronberg announced the charges at a news conference after a grand jury found the shooting unjustified. If convicted, Raja could face life in prison. Aronberg declined to answer questions about the case.
Jones family issued a statement saying they are relieved by the arrest.
"While we understand that nothing can bring back our son, brother and friend, this arrest sends a message that this conduct will not be tolerated from members of law enforcement," the statement said.
Raja's attorney, Richard Lubin, did not immediately respond to phone calls or email.
The charges, according to court documents, center on a recording of Jones talking to a tow truck operator after his SUV had broken down on an Interstate 95 off ramp before dawn as he returned home from a performance. Jones, a drummer who also worked as a housing inspector, had purchased his gun only days earlier because he was worried about being robbed of his music equipment, his family has said. He had a concealed weapons permit.
Jones and the operator had talked uneventfully for about two minutes when Raja, who is of South Asian descent, pulled up the ramp from the wrong direction and parked in front of Jones' SUV, according to charging documents. Raja, who was investigating a string of auto burglaries, was driving an unmarked cargo van with no police lights and was in civilian clothes: a tan T-shirt, jeans, sneakers and a baseball cap.
Raja's sergeant told investigators that he had instructed Raja to wear his tactical vest that has police markings while on this assignment for his own safety and to identify himself, but it was found in Raja's van along with his police radio, the documents say. Raja, 38, had been a police officer for seven years, but only about six months with Palm Beach Gardens, a well-to-do suburb. He also taught police classes at a local community college.
Charging documents say that, on the recording, as Jones and the operator talked, the door chimes from Jones' SUV sounded, indicating he stepped out as Raja approached. It recorded an exchange where Raja repeatedly asks variations of "You good?" to which Jones repeatedly replies he is. Raja never says he is a police officer.
Suddenly, the officer shouts, using an expletive, for Jones to put his hands up.
Jones replies: "Hold on!" And Raja repeats his demand.
Raja then fired three shots in less than two seconds, according to the charging documents. Ten seconds of silence then pass before three more shots, each fired about one second apart, are heard.
"A reasonable person can only assume the thoughts and concerns Corey Jones was experiencing as he saw the van approaching him at that hour of the morning," prosecutors wrote in the charging documents. "At no time during the recording did Raja say he was a police officer" and acted confrontationally, prosecutors wrote.
Immediately after the shooting, Raja used his personal cellphone to call 911. As the operator answered 33 seconds after the last shot was fired, according to charging documents, Raja yelled at someone to drop the gun even though Jones' autopsy showed a bullet had pierced his heart and lungs and would have felled him almost immediately.
Raja told the 911 dispatcher that he had identified himself as a police officer and that he began firing as Jones came at him with a gun, prosecutors say. He said he continued firing because Jones was pointing his gun at him as he ran away.
When Raja's sergeant and other officers arrived, they found Jones' body between some trees almost 200 feet from the back of his SUV. A police dog found Jones' gun about 75 feet from his SUV, near where Raja told his sergeant he had seen Jones throw it. The safety was on and it had fired no shots.
Prosecutors say in their charging document that given the distance between the gun and Jones' body — and the heart wound that would have incapacitated him — they believe Raja fired the last three shots after he knew Jones had thrown down his gun and was running away.
David S. Weinstein, a former state and federal prosecutor, said Aronberg probably charged Raja with manslaughter and attempted murder instead of murder to make it more likely to get a conviction. If Aronson went for first-degree murder and there were no provisions allowing for the jury to convict Raja of a lesser charge such as manslaughter, Weinstein said, he risked an acquittal or a hung jury if jurors believed Raja feared for his life when he fired the first shot.
Copyright 2016 The Associated Press. All rights reserved. This material may not be published, broadcast, rewritten or redistributed.