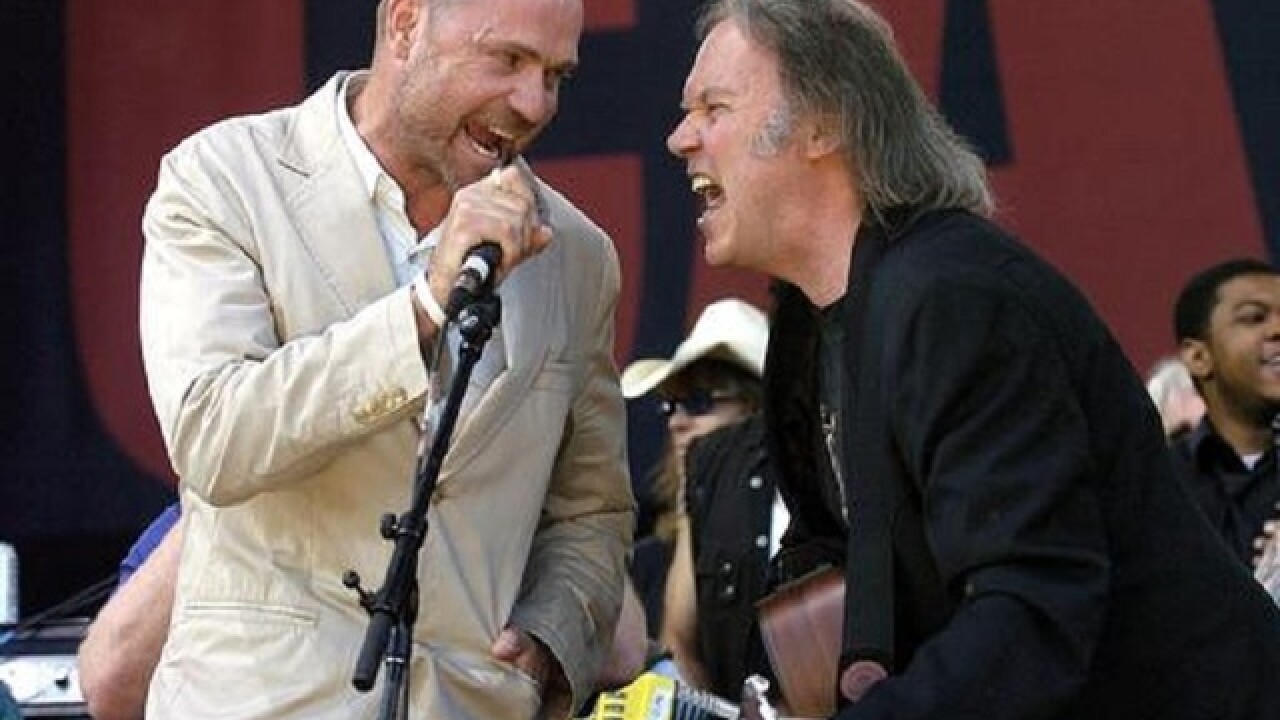 TORONTO (AP) — Canadian rootsy rock band The Tragically Hip announced Tuesday that its lead singer, Gord Downie, has been diagnosed with terminal brain cancer.
In postings on its website and Facebook page, the band said the 52-year-old Downie, a father of four, was diagnosed with the condition in December. It said "he's endured a lot of difficult times, and has been fighting hard."
Despite the diagnosis, it said, Downie and the band plan to tour Canada this summer, because it "feels like the right thing to do now, for Gord, and for all of us."
The specialist treating Downie, neuro-oncologist Dr. James Perry, later said Downie's brain tumor is incurable. Downie has already undergone surgery to remove the bulk of it and has had chemotherapy and radiation. He has been diagnosed with glioblastoma, which is the most common and most aggressive cancerous brain tumor.
"Other notable people have had this tumor. Recently Ted Kennedy and Joe Biden's son, so unfortunately even with the greatest connections and money there's no way to buy your way out of this," Perry said.
Perry said it's too early to say how much longer Downie has to live but said he's doing very well. He called Downie "a national treasure" and cleared him to tour. Downie has recovered much of his physical, mental and emotional strength.
'We'll have to deal with that week by week, concert by concert," Perry said when asked about how Downie's health would be affected by being on the road.
Perry emphasized that Downie will need to avoid fatigue while on stage. "We all know he doesn't sit down in a rocking chair and play banjo, so I think we have to be cautious about things like hydration," he said.
A seizure Downie suffered while walking down the street in his home town of Kingston, Ontario late last year led to an emergency hospital visit where imaging showed the tumor.
Neither Downie nor his bandmates attended the conference. Perry said Downie has asked for privacy and there will be no further updates.
The Hip's managers, Bernie Breen and Patrick Sambrook, said at the news conference they were shocked and stunned when they were informed of the tumor in December. Sambrook said they will announce the details of the Canada only tour on Wednesday.
"The will to do the tour was easy," Sambrook said. "His head space is 'We want to blow people's minds.'"
Sambrook said the tour quickly became a goal of the band.
"This is what these guys do," he said. "The band has a new record that they are really proud of and knowing Gord that way he was like 'Yeah, I want to play these songs for people.'"
Perry said post-tour Downie will receive maintenance chemotherapy and regular MRI scans to monitor the tumor.
The Tragically Hip's 14th studio album, "Man Machine Poem," will be released in mid-June. The band formed in 1984 in Kingston, Ontario and has garnered more than a dozen Juno awards in Canada. Downie's lyrics are peppered with hockey and life in Canada and the news of diagnosis quickly trended on social media in the country. The band sold millions of albums in their home country, but didn't get the same kind of radio play in the United States.
"Gord Downie is a true original who has been writing Canada's soundtrack for more than 30 years," Canadian Prime Minister Justin Trudeau tweeted.
Copyright 2016 The Associated Press. All rights reserved. This material may not be published, broadcast, rewritten or redistributed.