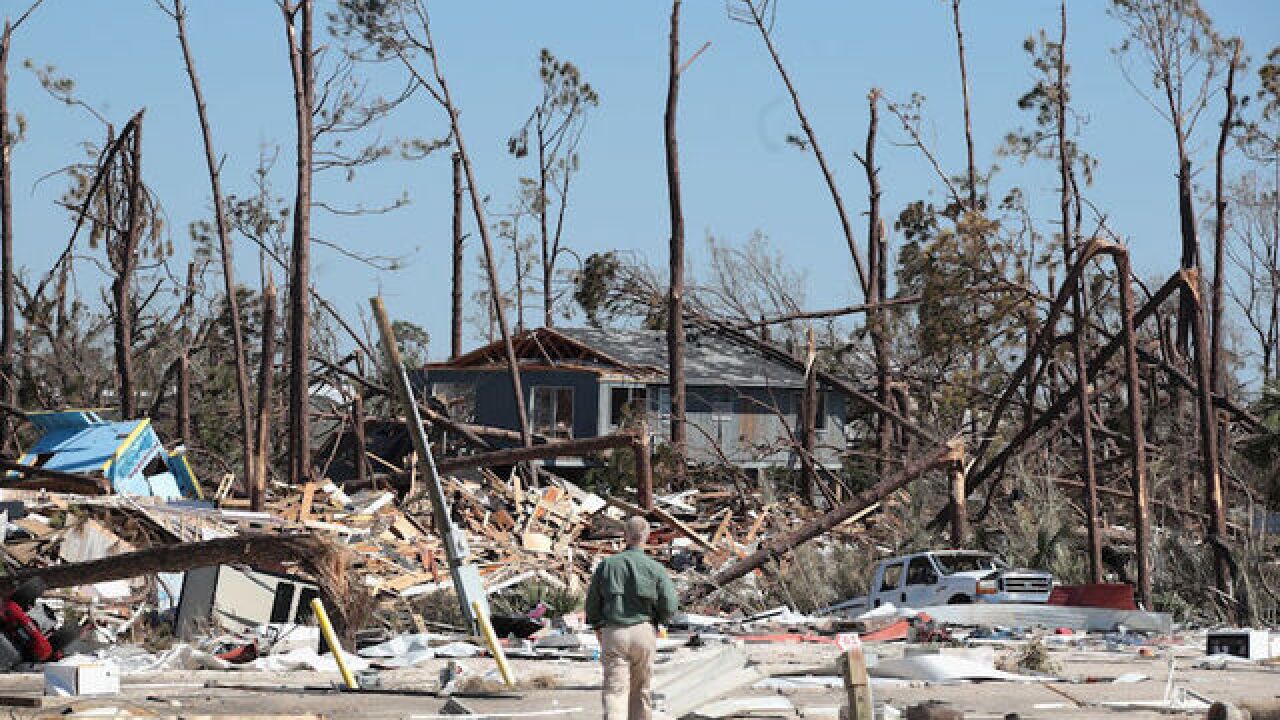 Image copyright 2018 Getty Images. All rights reserved. This material may not be published, broadcast, rewritten, or redistributed.
Scott Olson
<p>A first responder looks over damage following Hurricane Michael on October 13, 2018 in Mexico Beach, Florida. Hurricane Michael slammed into the Florida Panhandle on October 10, as a category 4 storm causing massive damage and claiming the lives of 18 people.</p>

Hurricane Michael's death toll climbed to 18 Saturday, after another victim was discovered in Virginia.

Fears were mounting for those who did not heed evacuation orders before Hurricane Michael bulldozed large swaths of Florida's Panhandle, and residents in the hardest-hit areas grew increasingly desperate for provisions.

"It's about to get stupid if people don't get food and water," Panama City Assistant Fire Chief Gary Swearingen said Saturday.

Some have already resorted to looting, according to CNN affiliate WEAR-TV , because of the lack of resources such as water, electricity and food.

"This (storm) hit so hard and so fast that the different aspects of human nature is going to come out, and people are going to do anything to survive," Panama City resident Christopher Donahue told WEAR.

There were also reports of a fatal shooting in Panama City, which authorities said is under investigation.

Gov. Rick Scott said in his 6 p.m. update Saturday more than 1,800 law enforcement officers have been sent to impacted areas in the Panhandle and Big Bend along with more than 400 ambulances with over 700 staff. The Florida National Guard has activated 4,000 soldiers and airmen to help with search and rescue, clearing roads and delivering supplies.

Two food and water distribution centers have opened, and others are expected, officials said.

Scott tweeted Saturday evening that 142,000 gallons of water and nearly 174,000 ready-to-eat meals were delivered to affected communities, with food and water being airdropped to the hardest hit counties.

Scott said Saturday evening there are 15 shelters open across the state and that 11 counties across Florida are eligible for individual assistance from the Federal Emergency Management Agency (FEMA). He also said 243,513 people are without power in Florida.

With the death toll from the storm rising to at least 18, the number of those still unaccounted for remains unclear.

The number of fatalities could rise into the double digits in Panama City and surrounding communities alone, Collier said.

"We're not able to gain access to all areas at this point in time," he said. "The quick response teams ... from around the state and nation have done a quick, rapid search of the area, have tried to clear homes the best they can."

In Panama City, the fire department has received more than 200 calls for checks on residents, but there are no resources to perform them, Fire Chief Alex Baird said. Completing the checks could take days or weeks.

With no power and with spotty cellphone service, residents still unaccounted for could be trapped in isolated areas, according to Baird. Scott said more than 2,000 of his personnel are working to restore cell service and communication in the impacted areas.

In Lynn Haven, a city north of Panama City, Mayor Margo Anderson told CNN affiliate News 13 Orlando through tears that she and the city manager almost died in the city hall building during the storm.

"I want the people here to know they are loved. We are going to build this city back. It's going to be beautiful, and now we have about two months before our power grid's going to be back up. Probably a few days before we have water, and when we have water it's not going to be drinkable water," Anderson said.

Bay District School Board Vice Chairman Steve Moss assessed the damage at Jinks Middle School in Panama City on Saturday, saying the hurricane will displace students from 25 of the district's 38 schools -- some for months, others for years. That accounts for the majority of the district's 26,000 students. A statement from Gov. Scott said the district, along with six others across the state, would close until further notice.

More than 757,000 customers are still without power in seven states following the storm, which touched down on the Panhandle as one of the most powerful hurricanes to hit the United States, leaving a trail of destruction that stretched as far as Virginia.

In the virtually leveled oceanside town of Mexico Beach, search-and-rescue crews made two passes through the rubble and continued searching Saturday.

About 280 of the town's 1,200 residents had indicated they would ride out the storm, but several of those likely fled at the last minute when the approaching storm's devastating strength became clear, Mayor Al Cathey said. At least one person -- an elderly man -- has been found dead there, and it's unclear how many are missing.

Cathey said he's been told it could take two months to restore power.

"Seventy-five percent of our city is not here (destroyed)," he said. "There's not one local business that's operational."

Sitting in a red pickup just steps away from her damaged home, Gayle Sweet recalled the last moments she shared with her husband.

"I told him, 'Hold on, just hold on, I'm calling for help now,' " she told CNN affiliate WFTS on Thursday, sobbing.

Her husband, Steven, was killed when an oak tree smashed their home in Gretna, Florida, and landed on top of him. The 44-year-old was among at least 18 who have died since Hurricane Michael made landfall Wednesday.

Hours after the storm left her home in ruins, Gayle Sweet refused to leave. Her husband's body was still trapped in the rubble.

"Hopefully they (emergency crews) will be here soon. I'm not going anywhere until they bring him out," she said.

At least eight people, including Sweet, have died in Florida. An 11-year-old girl died in Georgia when a carport came crashing through the roof. Two of the three people who were killed in North Carolina died when their vehicle struck a tree that had fallen because of high winds, said Adrienne Jones, deputy director for the McDowell County Emergency Medical Services.

Six people died in Virginia. Four drowned and a firefighter was killed when a tractor-trailer lost control and hit his truck on a wet highway in Hanover County. The Virginia Department of Emergency Management said Saturday a sixth person died in Charlotte County.

In Georgia, officials are receiving reports that 84 chicken houses -- estimated to hold more than 2 million chickens -- were destroyed in the storm, which also caused severe damage to pecan, cotton, vegetable and peanut crops.

"For me, the cotton crop is as bad as it gets. I was picking three bale cotton (this week); today it is gone," cotton farmer and state Rep. Clay Pirkle said. "Can't tell the difference between what I've picked and what I haven't."

After evacuating hundreds of patients, hospitals heavily damaged during Michael are still finding ways to help those in need.

The front door of Bay Medical Sacred Heart in Panama City was boarded up Friday, and water service hadn't been restored, but a handmade sign directed patients to the emergency room, which remains operational.

The hurricane-force winds were so powerful that they lifted the roof on the hospital's tower, where most of the patients were, and water poured into the facility. About 1,500 people, including doctors, nurses and patients, rode out the storm.

"It was a very scary few hours of howling winds, windows blowing in, crashing roofs, ceilings collapsing, but patients being cared for throughout all of it," said Amir Haghighat, a cardiologist with the Cardiovascular Institute of Northwest Florida who works at Bay Medical.

Hundreds of patients were taken Friday to hospitals across Florida and as far away as Mobile, Alabama, in a parade of ambulances and medical helicopters. The Panama City hospital is staying open receiving patients in an emergency room running on generator power.

In the wake of Hurricane Michael, local journalists in the Florida Panhandle are working in incredibly difficult conditions.

Panama City's two biggest TV stations, ABC affiliate WMBB and NBC affiliate WJHG, have been off the air for days. During Wednesday's broadcast, one of the last things viewers heard was a reporter saying, "It sounds like a train is coming over the roof of the TV station. The whole building is shaking."

WMBB general manager Terry Cole said his staff worked and slept at a next-door church Wednesday into Thursday. They've set up chairs and cameras in the parking lot and produced their newscasts from there.

The daily paper, the Panama City News Herald, still has no power. Cleanup crews were present when a CNN crew stopped by Friday. But the office was pretty much empty -- the journalists were all out reporting stories.

The impact of climate change on storms

Michael's strength may reflect the effect of climate change on storms. The planet has warmed significantly over the past several decades, causing changes in the environment.

According to the National Oceanographic and Atmospheric Administration, human-caused greenhouse gases in the atmosphere create an energy imbalance, with more than 90 percent of remaining heat trapped by the gases going into the oceans.

While there might not be more storms in a warmer climate, most studies show storms will get stronger and produce more rain. Storm surge is worse now than it was 100 years ago, thanks to the rise in sea levels.

The scientific research group Climate Central says unless the rate of greenhouse gas emissions changes, hurricanes are expected to intensify more rapidly in the coming decades.