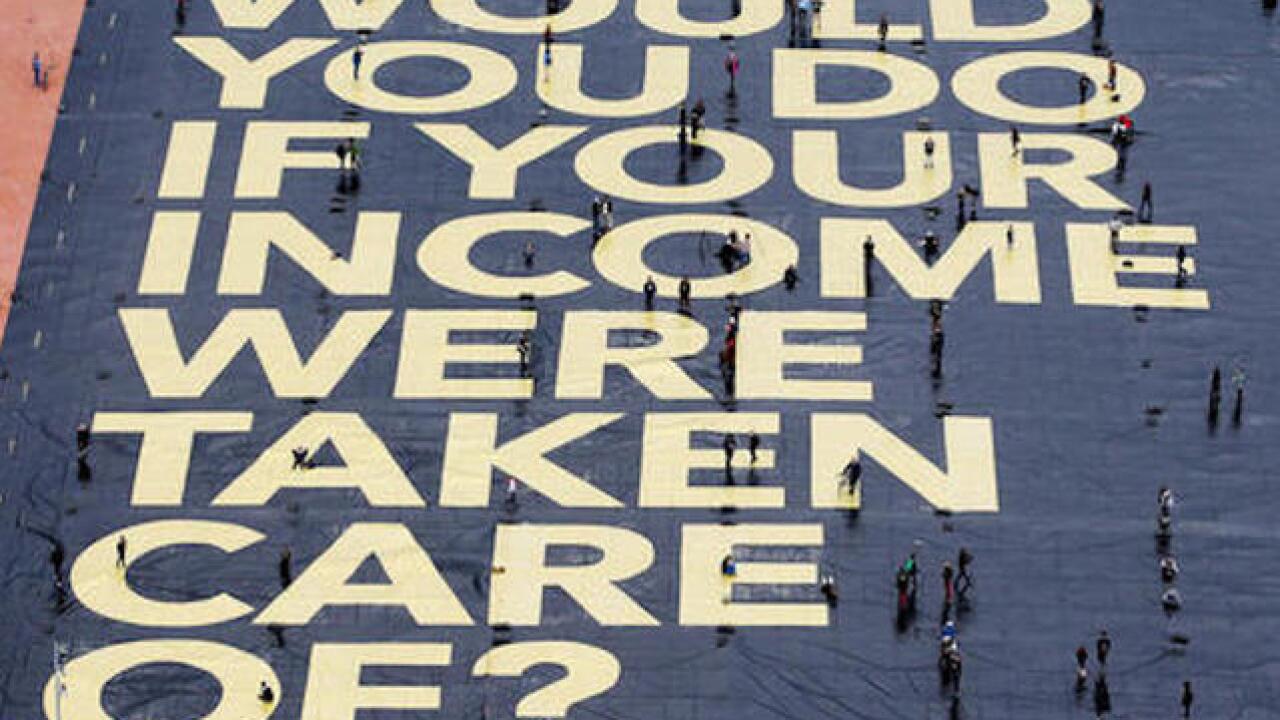 Magali Girardin
<p>FILE - In this May 14, 2016 file pictire a huge poster reading “What would you do if your income were taken care of?” is pictured on the Plaine de Plainpalais square in Geneva, Switzerland. The poster hints at a national referendum on June 5, were Swiss voters will have to decide on the introduction of an unconditional basic income for all. ( Magali Girardin/Keystone via AP)</p>

GENEVA (AP) — Would you accept about $2,500 from your government every month, no questions asked?

Swiss voters get a choice Sunday in a referendum that, while not specifying a figure, asks if they want "unconditional basic income." Experts estimate a minimum of 2,500 Swiss francs ($2,560) per month is needed for an individual to make ends meet in wealthy Switzerland, where private-sector health insurance is required and the cost of living is sky-high.

Critics warn that the policy would explode the state budget. The Swiss government itself advises voters to reject the proposal, and polls suggest it will fail in a country known for free-market policies and a high-tech, capitalistic financial sector.

Proponents, however, insist the time has come for a minimum monthly wage as sweeping 21st-century economic changes like robots displacing factory workers make jobs more precarious in the digital age. They say they're seeking momentum more than outright victory.

Polls have suggested that only about one-quarter of Swiss voters back the idea.

Still, the initiative cleared the bar for a vote, which in Switzerland's direct democracy means garnering at least 100,000 signatures in a petition drive. It is one of five issues on the ballot Sunday, including efforts to raise money for public services and simplify the application procedures for asylum-seekers.

Universal basic income might seem like souped-up welfare but proponents say it's actually aimed to supplant welfare. Advocates in Switzerland and other European countries also examining the idea say current welfare systems are overburdened by red tape, deterring many potential beneficiaries from applying.

The novelty of unconditional basic income is that everybody would get it automatically. It would be a floor: Salaried workers who earn more than 2,500 francs a month would get no extra money.

Under a proposed model, each child would get one-quarter of the total for adults — about 625 francs per month — a sum higher than state child-care outlays for families today.

Possible ways of paying for it would include fees on salaries of people who earn more than the minimum, savings from welfare programs that would be discontinued and taxes or spending cuts in the state budget.

Switzerland's basic income push is among the most advanced in Europe. The Dutch city of Utrecht wants to start a two-year experiment with a similar plan, handing money to residents who already receive welfare benefits.

Ralph Kundig, president of the Swiss chapter of the Basic Income Earth Network, said some economists favored the idea as a way to underpin consumption and support the economy.

"Our parents, grandparents and beyond worked hard so that we could produce more by working less, with machines and so forth," Kundig said. "The only thing that they did not foresee was that this wealth would only benefit the owners of the means of production."

Kundig said studies and pilot projects show people wouldn't just sit at home and do nothing.

"Basic income is much more of a stimulant to employment and the economic activity of a country," he said, adding it would increase entrepreneurship because people would be less afraid about losing jobs and more willing to take risks.

But an association of mostly small businesses in the southwestern Swiss region of Valais region, UVAM, is among the many voices calling for voters to reject the proposal, writing on its Web site: "No bread without work." It lambasted the basic income proposal as "an absolute danger, because it's the perfect negation of the virtue of work" that would entrench a dependent class and cost 208 billion francs per year.

"Without wealth, here's no redistribution, because money doesn't fall from the sky," the group wrote.

Kundig said all reforms are often viewed in a negative light at first.

"All advances in society — like retirement insurance or even the right for women to vote ... were initially considered catastrophes for the economy," he said of earlier Swiss reforms. "Everybody who resists social progress always says it can't be paid for, but that's just talk."