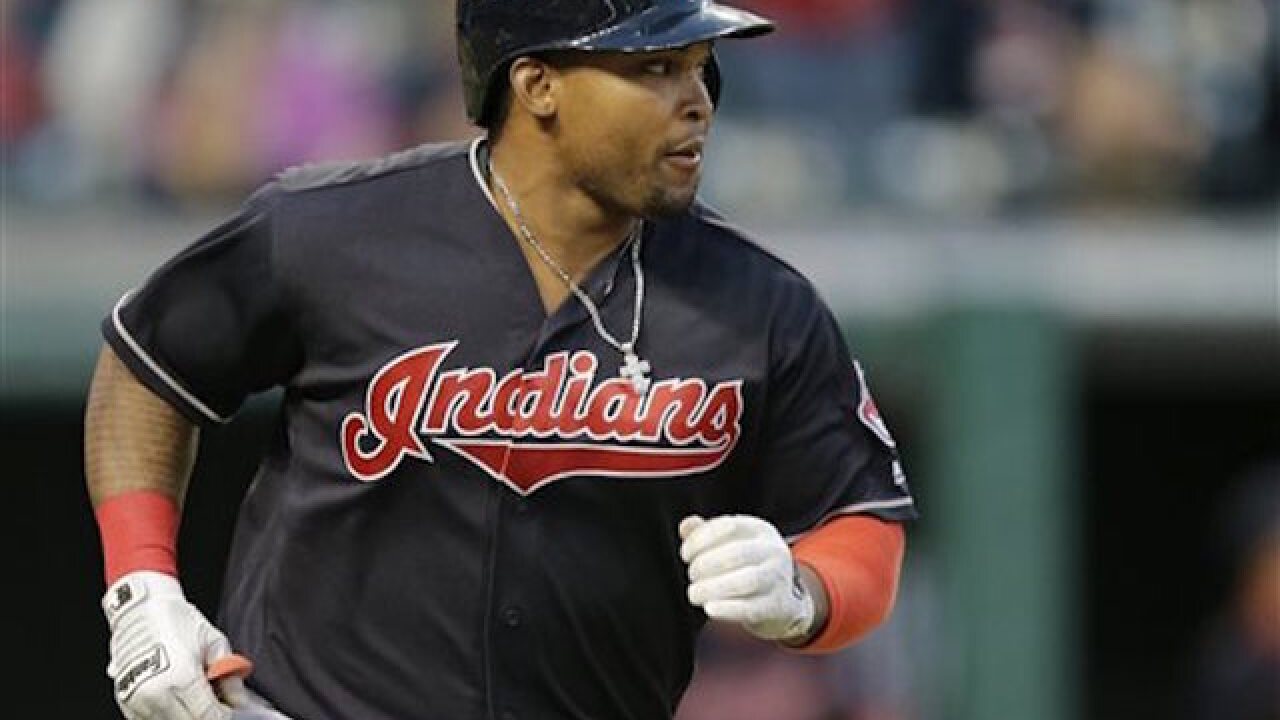 Copyright Associated Press
Tony Dejak
<p>In this May 16, 2016, file photo, Cleveland Indians' Marlon Byrd runs the bases after hitting a two-run home run off Cincinnati Reds relief pitcher Layne Somsen in the sixth inning of an interleague baseball game in Cleveland. Byrd has been suspended 162 games for testing positive a second time for a performance-enhancing drug, a person with knowledge of the suspension said Wednesday, June 1, 2016. (AP Photo/Tony Dejak)</p>

By: The Associated Press
Posted at 3:28 PM, Jun 01, 2016
CLEVELAND (AP) — Marlon Byrd's second strike with performance-enhancing drugs cost him a full season — and his career.
The Indians veteran outfielder was suspended 162 games without pay by Major League Baseball on Wednesday after testing positive for Ipamorelin, a growth hormone releasing peptide.
It's Byrd's second violation of Major League Baseball's Joint Drug Prevention and Treatment Program. Shortly after he was released in 2012 by Boston, Byrd served a 50-game suspension for testing positive for Tamoxifen, a medication used by body builders but also to treat breast cancer.
In 2014, MLB increased its penalty for a second offense from 100 games to a full season.
Byrd packed his belongings following a loss to Texas on Tuesday night, but he didn't tell the team about his suspension until he called manager Terry Francona on Wednesday morning. Later, he spoke to his teammates as a group in Cleveland's clubhouse.
"Marlon stood up in front of everybody and took responsibility and apologized," Francona said. "And, basically, he told the guys that his career is over and this is not how he wanted it to end. I'm sure there's going to be a lot of criticism of the situation, but it doesn't take away that we care about him. We care about our team, but we also care about the individuals. So, that hurts.
"It feels like we got kicked in the stomach a little bit."
Byrd is the second Cleveland outfielder to be suspended for PED use this season. Abraham Almonte, who was expected to open the season in center field, was slapped with an 80-game suspension during spring training.
Byrd released a statement, saying he had no intention of taking a banned substance and consulted with "a medical professional" for advice on what he could take since his suspension four years ago. He realized certain supplements he was ingesting were not approved, and he thinks he took a tainted supplement.
"I assumed certain risks in taking them," he said. "I alone am responsible for what I put in my body, and therefore, I have decided for forgo my right to an appeal in this matter and accept the suspension. I apologize for any harm this has caused the Cleveland Indians, Indians' fans, my teammates, and most importantly, my family."
A third suspension for Byrd would result in a lifetime ban. In February, New York Mets pitcher Jenrry Meija became the first player to receive that sanction. Byrd, Meija and New York Yankees star Alex Rodriguez are the only players to receive full-season suspensions.
Even if he's able stay clean, at 38, Byrd is unlikely to return to playing.
He signed a one-year, $1 million contract as a free agent in March with Cleveland, which needed veteran outfield depth because both left fielder Michael Brantley and right fielder Lonnie Chisenhall were recovering from injuries.
Byrd has been productive, batting .270 with five homers and 19 RBIs in 34 games — mostly against left-handers. He went 4 for 4 with a homer on Monday night against the Rangers, and then struck out three times in a loss Tuesday.
Indians president Chris Antonetti said the team did not act rashly in signing Byrd, knowing his checkered past.
"We spent a lot of time working through that," he said. "It had been three years at that point since he had the positive test. And he had been tested a lot of times. We did considerable work and due diligence on him as a teammate and a professional, and ultimately felt that it was worth the risk. To Marlon's credit, he actually came in and fit in very well with our team, got a long with the players, made a positive impact on the field and in the clubhouse. Obviously, this is unfortunate."
Byrd broke in with Philadelphia in 2002. He was an All-Star in 2010 with the Chicago Cubs, one of 10 teams for which he's played. Following his first suspension, Byrd signed with the New York Mets in 2013.
To replace Byrd on the roster, the Indians recalled outfielder Tyler Naquin from Triple-A Columbus, but it's possible the club will look to add another outfielder through a trade.
Copyright 2016 The Associated Press. All rights reserved. This material may not be published, broadcast, rewritten or redistributed.