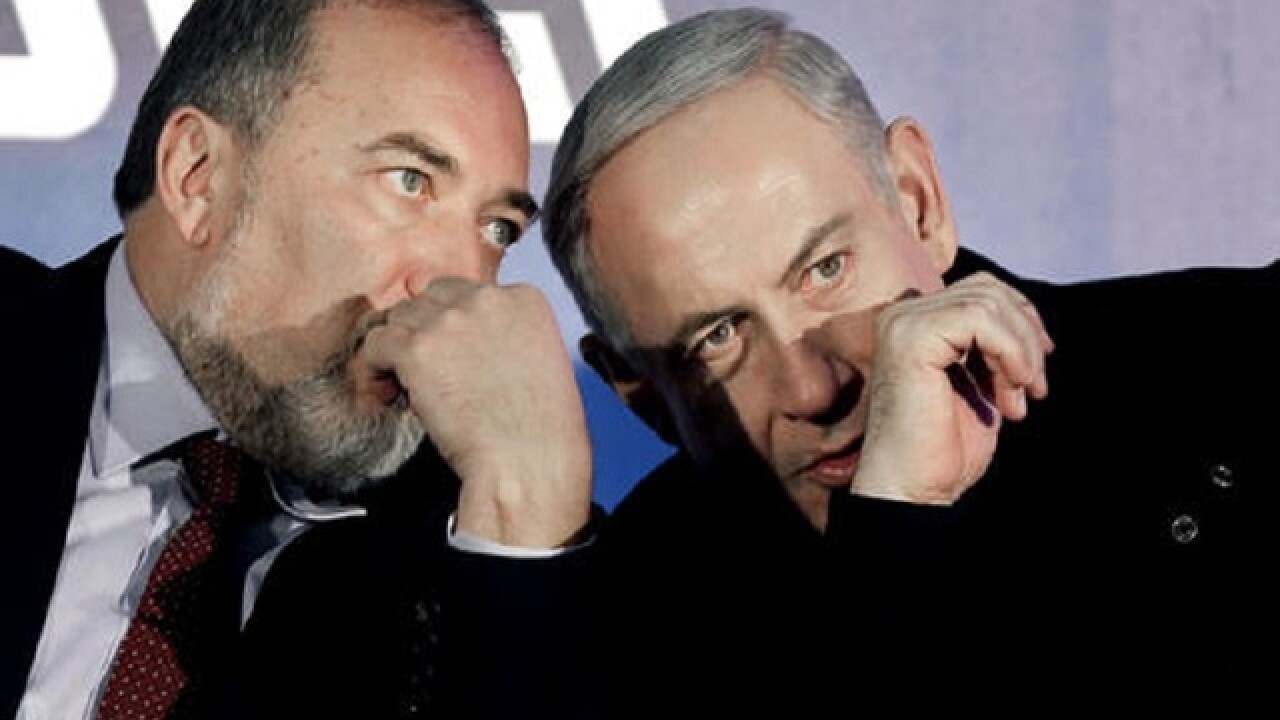 JERUSALEM (AP) — Prime Minister Benjamin Netanyahu reached a deal to expand his coalition government on Wednesday by bringing in the ultranationalist Yisrael Beitenu party and appointing its leader Avigdor Lieberman as his new defense minister.

The development caps a tumultuous political week that began with Netanyahu negotiating with the moderate Labor Party against a backdrop of international pressure to relaunch peace efforts with the Palestinians, before choosing Lieberman's hawkish party instead.

Lieberman is one of Israel's most polarizing politicians and has a reputation for making inflammatory statements.

In a joint signing ceremony in Jerusalem, Netanyahu and Lieberman insisted they have put their past differences behind them and sought to soothe fears over their new alliance by making calming statements in both Hebrew and, with an eye toward the world, in English as well.

"I am committed to promoting the peace process. I am committed to make every effort to reach an agreement," Netanyahu said, noting that developments in the region have created new opportunities for peace.

"I intend to seize those opportunities. A broader government, a more stable government will make it easier to do so," he added.

With the deal, Netanyahu expands his coalition to 66 of parliament's 120 members. He previously only had 61, the slimmest of majorities, which made it difficult to govern and legislate and opened him to potential extortion of any single lawmaker.

Netanyahu also made another feeble plea for Labor to join his government as well. But it will almost certainly be rejected by a party that is deeply distrustful of Netanyahu's motives and currently engaged in bitter infighting over even negotiating with him in the first place.

Lieberman will take over as defense chief in place for former military chief Moshe Yaalon, who resigned earlier this week following the political shakeup.

Yaalon, like Netanyahu, is a security hawk who was deeply skeptical of peace prospects with the Palestinians and led the military through a 50-day war against Islamic militants in the Gaza Strip in 2014. At times, he angered the U.S. by criticizing American peace initiatives in the region as naive or messianic. But he was protective of the military when it came under fire from ideologically-driven hardliners.

His departure leaves the Cabinet dominated by religious and ultranationalist ministers who oppose the establishment of a Palestinian state and have close ties to the West Bank settler movement. Lieberman himself is a West Bank settler.

In a three-decade political career, Lieberman has at times been Netanyahu's closest ally and at other times a fierce rival. While he is an experienced politician who has been foreign minister and held other top jobs, his security experience is limited.

Over the years, Lieberman has made headlines for a series of incendiary comments. At one point, he called for bombing Egypt's Aswan Dam and suggested toppling the internationally-backed Palestinian Authority in the West Bank. Just a few weeks ago, he threatened to kill a Hamas leader in the Gaza Strip. He has repeatedly voiced skepticism about pursuing peace with the Palestinians.

Those close to Lieberman, though, say he is far more pragmatic and level-headed in person than he appears in public and he seemed to be trying to convey that Wednesday.

"My commitment first of all is to responsible, reasonable policy," Lieberman said in English. "All of us have commitments to peace, to the final status agreement, to understanding between us and our neighbors."

Sami Abu Zuhri, a spokesman for Gaza's Islamic Hamas rulers, said all Israelis leaders are "criminals and killers" and that appointing Lieberman signaled "the increasing extremism and racism in the Israeli occupation."

Hamas, which is sworn to Israel's destruction, encouraged all other Palestinian faction to reject any "illusion" of normalization with Israel.