Metro Detroit Forecast: Storms are over for tonight
NewsNational 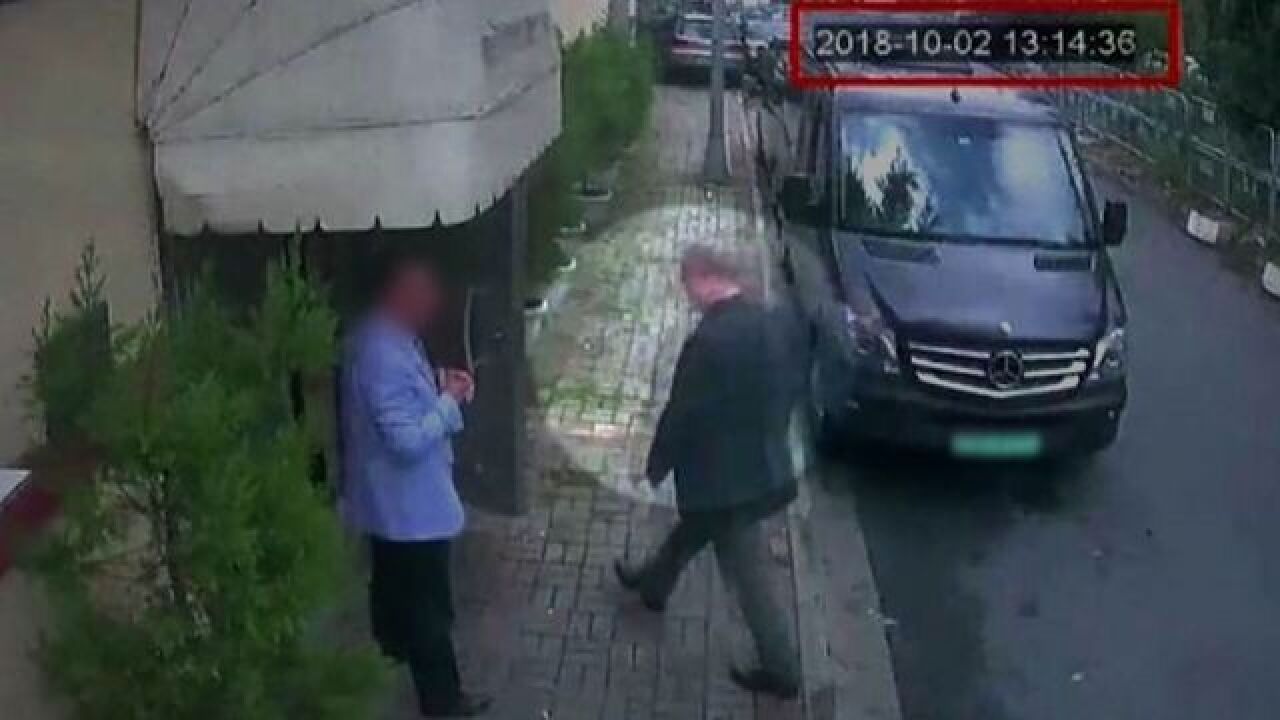 U.S. President Donald Trump has spoken to Saudi King Salman over the disappearance of journalist Jamal Khashoggi and will send Secretary of State Mike Pompeo to discuss the situation with the monarch.

Trump said in a tweet on Monday that the King denied any knowledge of the journalist's whereabouts. Khashoggi, a columnist for The Washington Post and a Saudi royal insider-turned-critic, entered the Saudi consulate in Istanbul, Turkey, on October 2 and has not been seen since.

Saudi authorities maintain Khashoggi left the consulate the same afternoon, but have provided no evidence of that.

"Just spoke to the King of Saudi Arabia who denies any knowledge of whatever may have happened 'to our Saudi Arabian citizen.' He said that they are working closely with Turkey to find answer. I am immediately sending our Secretary of State to meet with King!," Trump tweeted.

International pressure is mounting on Riyadh to explain the journalist's disappearance. Saudi Arabia has given Turkey permission to search its Istanbul consulate Monday afternoon, a Turkish diplomatic source told CNN.

Saudi officials first granted permission for the consulate to be searched last week, but later asked for a delay and no search has yet taken place. Turkish officials also want to search the nearby consul general's residence, and have repeatedly accused the Saudis of failing to cooperate with their investigation.

Khashoggi's disappearance has created a diplomatic rift between Saudi and the West, with the U.K., France and Germany demanding a "credible investigation" into the events and U.S. President Donald Trump warning of serious retribution if the Saudis are found to be behind his possible death.

A joint Turkish-Saudi working group into the case has been proposed, but the results of a separate, internal Saudi investigation should be made public soon, a Saudi official with knowledge of the probe told CNN on Monday.

The Saudi official said that a royal decree was issued Friday directing the public prosecutor to conduct an internal investigation into the Khashoggi case, based on intelligence shared with Saudi Arabia by Turkey.

The official said that although a joint investigation team was cooperating on the ground, the Saudi "leadership had felt that an internal investigation was needed to make sure no stone is left unturned to unfold the truth."

On Sunday, Washington and Riyadh traded a series of threats, with Trump warning of the potential for "severe punishment" and Saudi officials threatening to retaliate if the U.S. imposed sanctions. Riyadh later softened its tone.

"There's something really terrible and disgusting about that, if that were the case. So we're going to have to see," Trump said in a "60 Minutes" interview broadcast Sunday. "We're going to get to the bottom of it and there will be severe punishment."

Saudi Arabia's stock market fell as much as 7 percent on Sunday amid fears of sanctions. The index recovered some ground later to close 3.5 percent down. The market's drop of as much as 9% since Khashoggi vanished has wiped out all the market's gains in 2018, although it is still up 8 percent from a year ago.

Not clear if Saudis will allow comprehensive search

The news that Turkey could enter the consulate comes a day after Saudi King Salman called Turkish President Recep Tayyip Erdogan to discuss the Khashoggi case.

On Sunday, the two leaders agreed on a joint working group to look into the journalist's disappearance -- three days after a similar announcement regarding the formation of a working group.

Turkish investigators are pushing for complete access for forensic teams to enter the consulate and the nearby consul general's residence, according to Turkish media reports. It was unclear whether the Saudis would allow the comprehensive search at both premises that the Turks have requested permission to carry out.

Turkish authorities believe 15 Saudi men who arrived in Istanbul on October 2 were connected to Khashoggi's disappearance and possible murder. At least some of them appear to have high-level connections in the Saudi government.

On Friday, a source familiar with the ongoing investigation told CNN that Turkish authorities have audio and visual evidence that Khashoggi was killed inside the consulate.

His fiancée, Hatice Cengiz, who was waiting outside the consulate, says she did not see him re-emerge.

Amid the diplomatic fallout over Khashoggi's disappearance, international firms are pulling out of a high-profile investment summit, the Future Investment Initiative conference, dubbed "Davos in the Desert," due to take place later this month in Riyadh and to be hosted by Saudi Arabia's de facto ruler, Crown Prince Mohammed bin Salman.

The latest high profile invitee to say they would not attend the conference was the CEO of JP Morgan Chase, Jamie Dimon, a spokesperson confirmed Sunday.

In a joint statement on Sunday, the foreign ministers of the U.K., France and Germany said "light must be shed" on Khashoggi's disappearance and demanded a "credible investigation."

British foreign minister Jeremy Hunt on Sunday urged Saudi Arabia to explain what happened to Khashoggi, saying, "if they have got nothing to hide, then they will and should cooperate."

"If, as they say, this terrible murder didn't happen, then where is Jamal Khashoggi? That's what the world wants to know," said Hunt.

U.S. Secretary of State Mike Pompeo on Saturday declined to confirm whether U.S. Treasury Secretary Steven Mnuchin would still be attending the conference in Riyadh.

"I think we need to continue to evaluate the facts and we'll make that decision -- I talked to Secretary Mnuchin about it last night, we'll be taking a look at it through the rest of the week," Pompeo, alongside President Trump, told reporters in the Oval Office on Saturday.

In what appeared to be a coordinated response, a number of Arab countries gave their support to Saudi Arabia. Oman, Bahrain, Jordan, Lebanon, the United Arab Emirates and Egypt all put out statements on Sunday saying they express solidarity with Saudi Arabia. The Palestinian Authority also put out a statement of support.

In a strongly worded op-ed published later on Sunday, Turki Aldakhil, general manager of the Saudi-owned Al-Arabiya news channel, warned that if the U.S. imposed sanctions on Riyadh "it will stab its own economy to death," cause oil prices to reach as high as $200 a barrel, lead Riyadh to permit a Russian military base in the city of Tabuk, and drive the Middle East into the arms of Iran.

Faisal bin Farhan, a senior adviser at the Saudi Embassy in Washington, DC, said on his official Twitter account Sunday that the op-ed "did not reflect the thinking of the Saudi leadership."

The Saudi Embassy in Washington offered a milder statement in a tweet on Sunday.

"To help clarify recently issued Saudi statement, the Kingdom of Saudi Arabia extends its appreciation to all, including the US administration, for refraining from jumping to conclusions on the ongoing investigation," the statement said.

A delegation from Saudi Arabia arrived in Turkey for the investigation into Khashoggi's disappearance, Turkey's state-run Anadolu Agency reported Friday.

But last week a senior Turkish official speaking on the condition of anonymity told CNN that the Saudis were not cooperating with the investigation: "They are not open to cooperating."

A U.S. official familiar with the intelligence told CNN that the U.S. had intercepts of Saudi officials discussing a plan to lure Khashoggi back to Saudi Arabia and detain him.

Washington's "working assumption" is that Khashoggi was killed inside the consulate in Istanbul, according to a US official familiar with the latest intelligence. "We are pretty clear eyed it is likely to have happened and it didn't end well," the official said. The source did caution that this was the latest assessment and no conclusions had been made.

However, last week Trump said he was reluctant to take action, particularly on the issue of arms sales. "There are other things we can do," he told reporters at the White House.

The US signed a nearly $110 billion defense deal with Saudi Arabia in May 2017, when Trump made Saudi Arabia a stop on his first foreign trip as president. The stop was seen, in part, as an endorsement of the strong relationship between Trump, Jared Kushner -- his son-in-law and senior adviser -- and bin Salman.

Over the weekend a U.S. senior administration official said that the US hasn't really dealt much with the Turks on the Khashoggi investigation yet because US officials, including the embassy staff, mostly focused last week on repatriating American pastor Andrew Brunson, who was accused of plotting a coup attempt against Erdogan.

The U.S. President said Friday he had not yet spoken with King Salman -- bin Salman's father -- in the wake of Khashoggi's reported killing, but that he planned to "pretty soon."