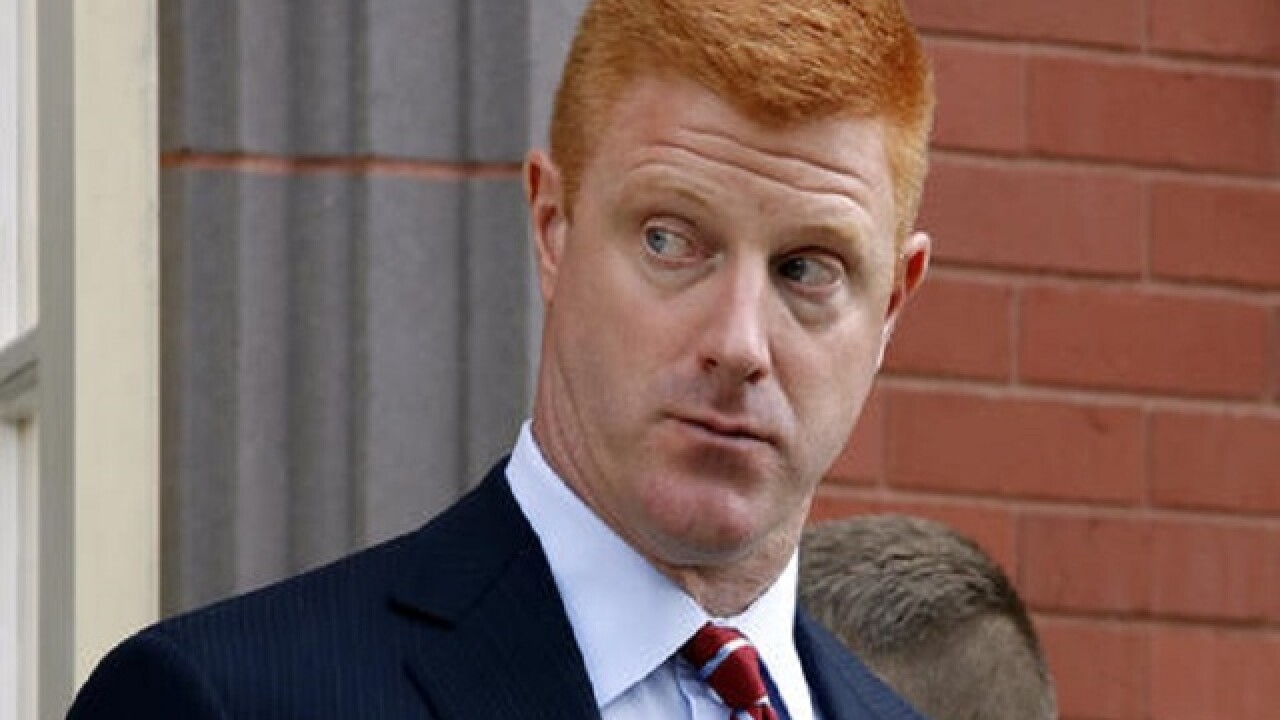 BELLEFONTE, Pa. (AP) — A jury awarded a former Penn State assistant football coach $7.3 million in damages Thursday, finding the university defamed him after it became public that his testimony helped prosecutors charge Jerry Sandusky with child molestation.
Jurors deliberated for about four hours in Mike McQueary's defamation and misrepresentation suit.
Judge Thomas Gavin still must decide McQueary's whistleblower claim that he was treated unfairly as the school suspended him from coaching duties, placed him on paid administrative leave, barred him from team facilities and then did not renew his contract shortly after he testified at Sandusky's 2012 trial.
McQueary remained stoic as the verdict was read, and he and his lawyers made no comment as they left the courthouse.
A Penn State spokesman said the university would not comment on the case and the jury's decision until a final decision is rendered on all counts.
McQueary had been seeking more than $4 million in lost wages and other damages, saying he was defamed by a statement the school president released the day Sandusky was charged, retaliated against for helping with the Sandusky investigation and misled by school administrators.
Sandusky, a former defensive coach at Penn State, was convicted in 2012 of sexual abuse of 10 boys and is serving a 30- to 60-year prison sentence. He maintains his innocence.
"He should not have been the scapegoat," lawyer Elliot Strokoff said of McQueary, speaking to jurors.
In closing arguments earlier Thursday, Penn State attorney Nancy Conrad emphasized McQueary had said he was damaged by public criticism that he did not to go to police or child welfare authorities when he saw Sandusky sexually abusing a boy in a team shower in 2001. Instead he reported it the next day to then-head coach Joe Paterno.
"Mr. McQueary was not damaged by any action of the university," Conrad argued. "Mr. McQueary, as he testified and as he recognized, if he was harmed, was harmed by national media and public opinion."
McQueary testified he has not been able to find work, either in coaching or elsewhere, but Conrad blamed that on an inadequate network of contacts and the lack of a national reputation.
McQueary was not allowed to coach in the school's first game after Paterno was fired, a home loss to Nebraska.
"That sends a very clear signal to those in your network that the university doesn't want you to be supported," Strokoff said. "'Stay away, you're a nonperson.'"
Penn State has argued it put McQueary on leave out of safety concerns, as threats were fielded by the university.
Strokoff said there was no evidence of multiple death threats against his client and called McQueary's treatment outrageous.
Jurors awarded McQueary $1.15 million on the defamation claim and $1.15 million on the misrepresentation allegation that two administrators lied to him when they said they took his report of Sandusky seriously and would respond appropriately. They also awarded $5 million in punitive damages.
Conrad insisted the university did take steps to inform McQueary about the actions they were taking, which included telling Sandusky to stop bringing children into team facilities and meeting with Sandusky and an official from the children's welfare charity he founded.
"No one told Mr. McQueary, 'You cannot go to the police,'" Conrad said.
The defamation claim involved a statement issued by then-Penn State President Graham Spanier expressing support for the two administrators when they were charged with perjury in for allegedly lying about what McQueary told them in the weeks after the 2001 incident.
A state appeals court earlier this year dismissed the perjury charges against the administrators, former Athletic Director Tim Curley and former Vice President Gary Schultz. But Curley, Schultz and Spanier still await trial in Harrisburg on charges of failure to properly report suspected child abuse and endangering the welfare of children.
Strokoff said Spanier's statement could have led people to conclude McQueary was a liar.
Copyright 2016 The Associated Press. All rights reserved. This material may not be published, broadcast, rewritten or redistributed.