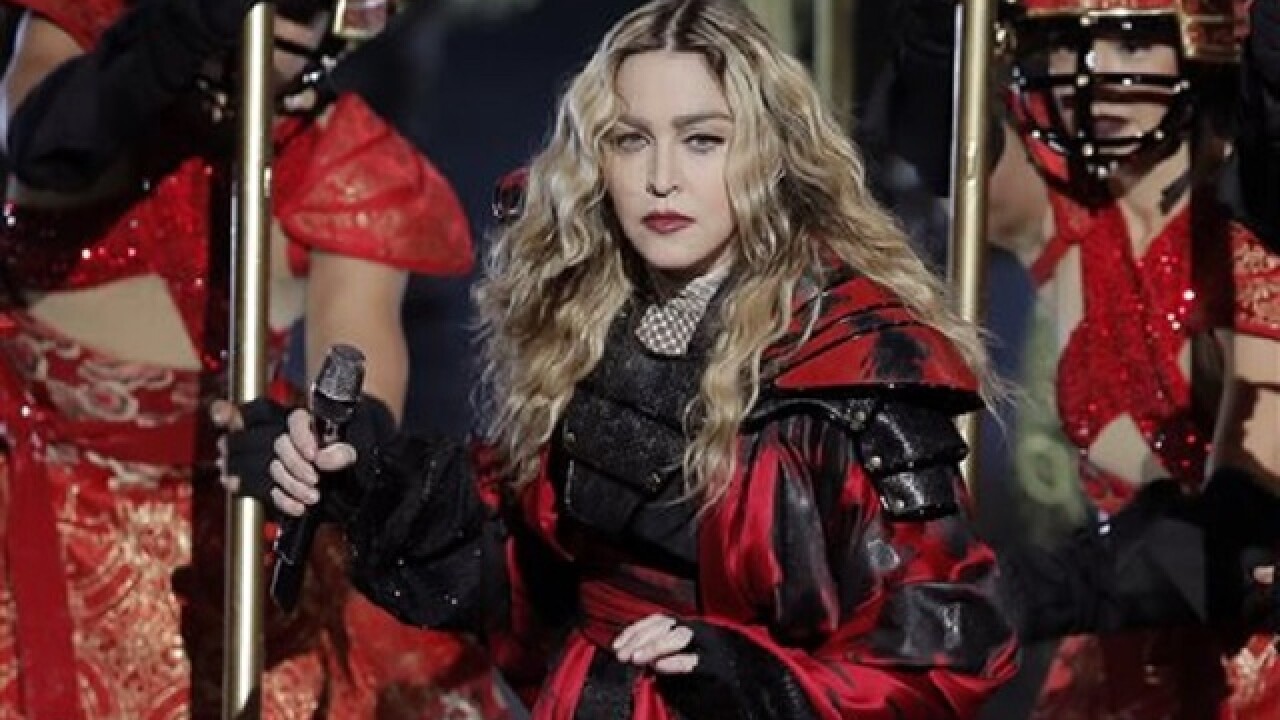 Kin Cheung
<p>FILE - In this Feb. 20, 2016 file photo, U.S. singer Madonna performs during the Rebel Heart World Tour in Macau, China. Madonna has angered fans by starting a concert in the Australian city of Brisbane more than two hours late and finishing the show early Thursday morning, March 17 after the last train had left the venue. (AP Photo/Kin Cheung, File)</p>

By: Associated Press
Posted at 8:30 PM, Nov 07, 2016
NEW YORK (AP) — Madonna belted out some of her biggest hits on Monday night as she treated people in the city to a surprise outdoor concert in support of Democratic presidential nominee Hillary Clinton.
About 300 people jammed into Washington Square Park, in the heart of Manhattan, to watch the pop singer perform "Express Yourself," ''Don't Tell Me," ''Imagine," ''Like a Prayer" and "If I Had a Hammer" while they sang along.
Madonna opened the 30-minute performance by urging the crowd to vote on Tuesday.
"This is a concert that is about unifying us, and it's about keeping America great, not making America great again," Madonna said. "Tomorrow we're going to keep America great. We're going to elect a president that does not discriminate."
As she finished the concert, she again urged the growing crowd to go to the polls and vote for Clinton.
"New York! Tomorrow is the big day. Are you listening?" She said. "Do we want Donald trump to be president?"
"No!" the crowd roared back.
"Do we need Hillary Clinton?"
"Yes!"
Some in the crowd were just as excited to vote for Clinton as they were to see a Madonna performance.
"It's really exciting the enthusiasm to elect the first woman president, to elect a president who will fight for LGBT rights, fight for women's rights and to move America forward," said Zach Baum, a 23-year-old from Long Island. "It's really a choice about who we are as a nation."
For Sara Bellis, a 34-year-old stay-at-home mom from the Bronx who wore a yellow "Hillary" pin, the election of Clinton has been a long time coming.
"I've been a Hillary fan since I was in elementary school," Bellis said. "Now I have three kids, and I think far and away she has the best chance of creating the kind of world I want them to have."
With just hours before Election Day, Clinton and Trump, the Republican presidential nominee, continued to crisscross the battleground states in an effort to secure every last vote.
Copyright 2016 The Associated Press. All rights reserved. This material may not be published, broadcast, rewritten or redistributed.