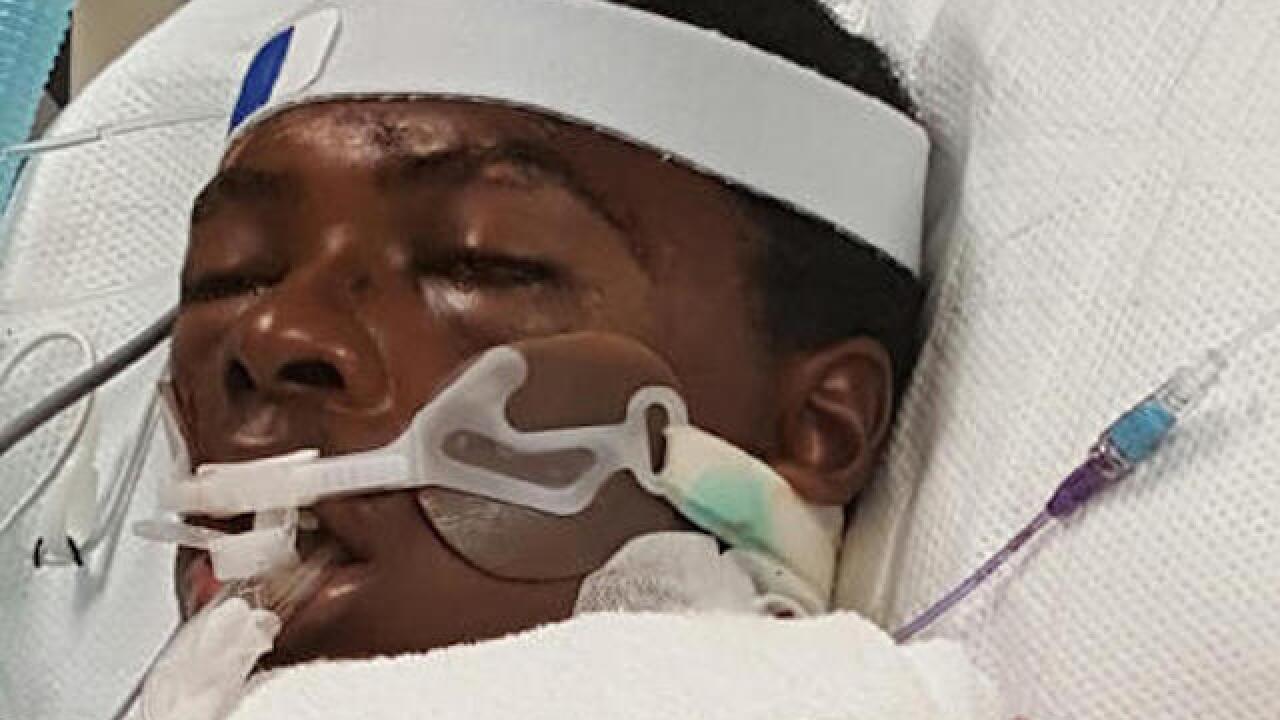 Copyright Associated Press
Prinice Thomas
<p>This photo provided by Prinice Thomas shows his nephew Tawon Boyd, 21, in the hospital after he was punched and held to the ground by Baltimore County police officers after a confrontation outside his home on Sunday, Sept. 18, 2016. Boyd died Wednesday, Sept. 21, 2106, three days after the fight with the officers. Police are investigating his death, and an autopsy is pending. Police responded to Boyd&rsquo;s home in Middle River, Md., after Boyd&rsquo;s girlfriend called 911 because he was behaving strangely. (Prinice Thomas via AP)</p>

MIDDLE RIVER, Md. (AP) — A black man died three days after he called police to his suburban Baltimore home during an outburst of strange behavior and was punched in the face and held to the ground by officers, police and relatives said.

Tawon Boyd, 21, died Wednesday after spending three days in a hospital following the confrontation with officers Sunday morning outside his home in Middle River. Baltimore County police said in a statement that he became aggressive with officers, who used physical force to subdue him.

"They kept on grabbing on him and holding him down, and he started screaming, 'Grandma, Grandma, they're going to kill me,'" Linda Burch, Boyd's grandmother, told The Associated Press. Burch, 51, had been staying with her grandson and witnessed the confrontation across the street from his home.

An autopsy is being conducted to determine the cause of death. A lawyer for Boyd's family, Latoya Francis-Williams, told The Associated Press that Boyd's kidneys and heart failed. She said it's not clear whether his death resulted from the beating or a medical condition, but she said he hadn't experienced kidney failure previously.

"He didn't have those bruises. He wasn't battered before this. He wasn't unconscious before this," Francis-Williams said Thursday. "All of the physical injuries came from the severe beating he took on Sunday."

The confrontation occurred after Boyd himself called 911, police and Francis-Williams said Thursday. The lawyer and police initially believed Boyd's girlfriend had placed the call. Francis-Williams said the operator heard Boyd's girlfriend in the background saying he needed medical attention. Boyd did not ask for medical aid and officers responded because the call indicated a domestic disturbance, police said in a statement.

When police arrived, Boyd told officers there was someone inside his house, but in fact there was no intruder, according to a police report obtained by The AP. He "appeared to be confused and paranoid," police said in the report, and his girlfriend told officers he was acting "crazy."

The confrontation with police began after Boyd repeatedly banged on the door of a neighbor's home and officers tried to pull him away to keep him from going inside, according to the police report. Police said Boyd also tried to enter several marked police cars. He refused to obey orders to lie down and put his hands on his back, and began grabbing and kicking officers, injuring three of them, police said.

"I think they killed him," Burch told AP. "By them being so many, and they tall and big, and he's small. It didn't take all them police just to try to hold him down."

Boyd was 5-foot-5 inches tall, according to court records, and Francis-Williams said he weighed 122 pounds.

Francis-Williams said she's found no evidence that Boyd was violent before officers started beating him.

"Blows to the head, choking somebody — that's deadly force," Francis-Williams said. "I haven't heard any officer articulate that his or her life was in danger or there was an actual threat of severe bodily injury or death."

One officer punched Boyd twice in the face because Boyd was hanging onto him, according to the police report. The officers restrained Boyd by holding him down with their arms and legs, the report said. The confrontation with police lasted about five minutes, and five officers were involved, the report said.

Medics were called during the struggle and gave Boyd something to calm him down, but the name of the medication was redacted from the police report. Police said medical privacy laws prevent them from detailing the treatment.

The report said officers believed Boyd was under the influence of a narcotic. Boyd's uncle, Prinice Thomas, told AP that he had never known Boyd to use any drug other than marijuana.

Boyd worked as a forklift operator, his family's attorney said, and he had a 3-year-old son with his girlfriend, Deona Styron, who was pregnant with the couple's second child. In June, Styron sought a temporary protective order against him, alleging that he hit and choked her, according to court records.

"He gets mad and starts hitting me and fussing at me and I can't take it anymore. He needs to seek help," Styron wrote.

Styron did not return a message left at a number listed for her.

Homicide detectives are investigating the incident, standard procedure in police-involved deaths. The department did not reveal the races of the officers.

Like many black men who have died during confrontations with police, Boyd's name was trending as a hashtag on Twitter, but there were no immediate protests. Boyd died on the same day that Baltimore County prosecutors said no charges would be filed in the death of Korryn Gaines, a 23-year-old black woman who, police and prosecutors said, pointed a shotgun at officers during a standoff at her apartment.

About 70 people gathered for a community meeting Thursday night in Randallstown, where Baltimore County State's Attorney Scott Shellenberger faced questions from residents about his decision not to bring charges in the Gaines case.

Kelly Carter, executive director for the Liberty Road Business Association, said the two cases have reinforced her concerns that the county's police department needs to work on community relations.

"I think that they need to go back to the drawing board and create new training programs for the officers," Carter said after the meeting. "And I think there needs to be more of a presence in building community relations."

Activists with the Black Lives Matter movement protested over Gaines' death, and a wrongful-death lawsuit has been filed.

Francis-Williams said lawsuits were possible and that the county's police department has problems similar to neighboring Baltimore city, where a Justice Department investigation found repeated civil rights violations. The investigation followed the death of Freddie Gray, a black man who died after suffering a spinal injury while riding in a Baltimore police van.