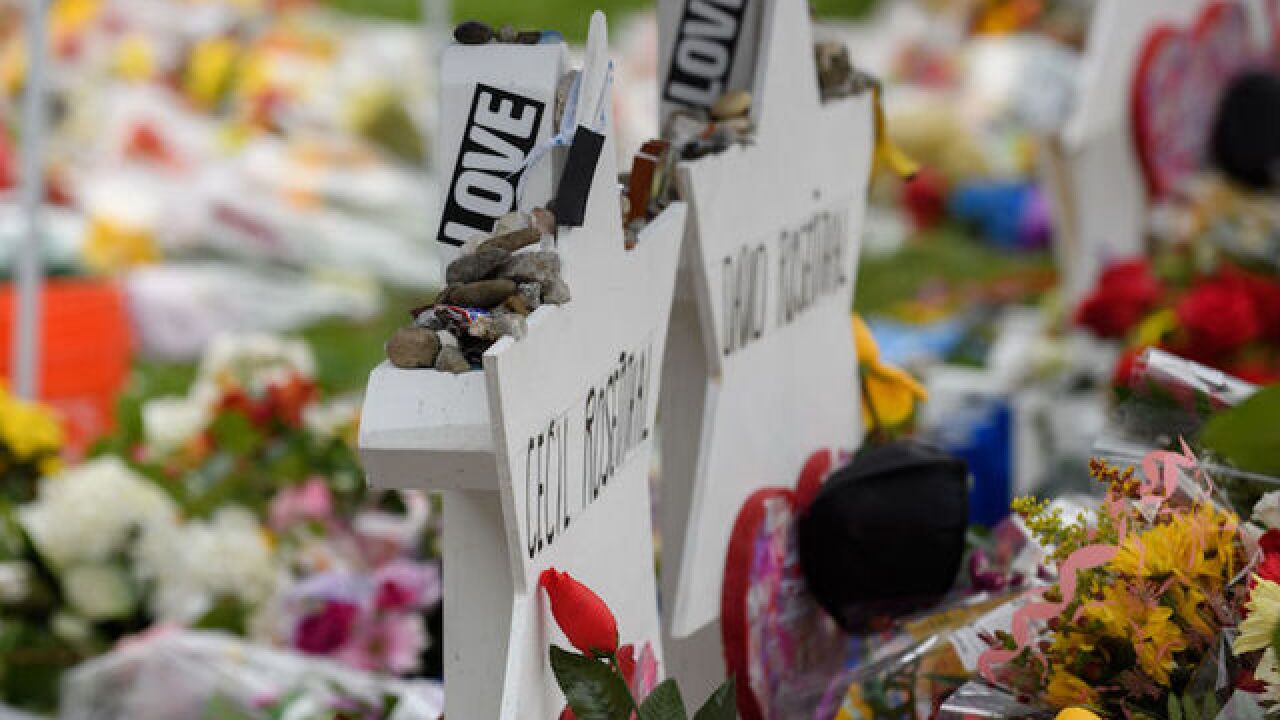 Image copyright 2018 Getty Images. All rights reserved. This material may not be published, broadcast, rewritten, or redistributed.
Jeff Swensen
<p>The makeshift memorial Saturday morning in front of the Tree of Life Synagogue on November 3, 2018 in Pittsburgh, Pennsylvania. </p>

A Washington man who followed the Pittsburgh synagogue suspect on social media was arrested on gun charges after his relatives reached out to authorities, federal court documents show.

Jeffrey R. Clark Jr. was charged Tuesday with illegal possession of a high-capacity magazine and transporting a firearm in interstate commerce.

Clark's family members tipped off authorities after they grew concerned over his involvement with the so-called alt-right movement, an affidavit says. It said he was "friends" with synagogue shooting suspect Robert Bowers on Gab, a social media platform that describes itself as "the free speech social network."

On October 27, within hours of the attack that killed 11 people at the Tree of Life synagogue in Pittsburgh, Clark's brother, Edward, went to Theodore Roosevelt Island in Washington and fatally shot himself, the affidavit says.

"After the death of Edward Clark, Jeffrey Clark became more outspoken about his radical views, expressing them openly to his family members who were in the area following Edward Clark's death," the affidavit says. "During these conversations, Jeffrey Clark defended Robert Bowers' killings at the Tree-of-Life Synagogue. Jeffrey Clark also stated that he and Edward Clark had both fantasized about killing 'Jews and blacks.' "

A few days after the suicide, two family members called federal authorities and said Jeffrey Clark had been "really riled up" and "agitated" after his brother's death, and he could be a danger to himself or others, the affidavit says.

Jeffrey Clark shared his opinions on Gab, and was connected with the Pittsburgh synagogue suspect through the social networking site, the affidavit alleges.

Jeffrey Clark's profile picture on Gab included a photo of him and his brother wearing masks and holding a shotgun and a rifle, court records said. The affidavit alleges they posed in front of a flag with crossbones.

After the Pittsburgh shooting, Jeffrey Clark posted on Gab supporting Bowers, the affidavit says. One post shows a picture of Bowers, armed with a gun, "splattered in what appears to be blood, followed by the following post by Clark: "... Get used to it libtards. This was a dry run for things to come," the affidavit says.

Clark's Gab profile has since been deleted. CNN reached out to Gab to ask why or who deleted it.

"It is Company policy to assist and cooperate with law enforcement. Although we would like to say more, as there is an active law enforcement investigation in this matter, we are unable to provide further information at this time," Gab told CNN in a statement.

Gab, the tiny social media website used by the accused Pittsburgh synagogue shooter, has become a haven for white supremacists. It defends itself as an unbiased home for unfettered speech, but it has taken part in anti-Semitic commentary, deleted tweets show.

Since Gab's inception in 2016, its founders have been open about their intention to create what amounts to a space for right-wing people who feel unwelcome on mainstream social media platforms.

"Gab welcomes everyone, but sees a unique opportunity to carve a niche in a massively underserved and unrepresented market. We estimate that there are over 50 million conservative, libertarian, nationalist, and populist internet users from around the world who are seeking an alternative to the current social networking ecosystems," Gab stated in a company filing dated July 11, 2017.

Gab's terms of service prohibited "calling for the acts of violence against others, promoting or engaging in self-harm, and/or acts of cruelty, (and) threatening language or behavior that clearly, directly and incontrovertibly infringes on the safety of another user or individual(s)."

A review of records in the District of Columbia showed that four guns were registered to the brothers, including a Remington Arms handgun and a Mossberg Maverick 88 shotgun registered to Jeffrey Clark, according to the affidavit.

In addition to the weapons Jeffery Clark owns, the affidavit says, officers recovered a Colt .38 special handgun that he surrendered. It was not registered to either brother. The boxes obtained from Clark also had several items, including parts used to modify AR-15 assault rifles, according to the affidavit.

CNN has reached out to Clark's attorney but has not heard back.