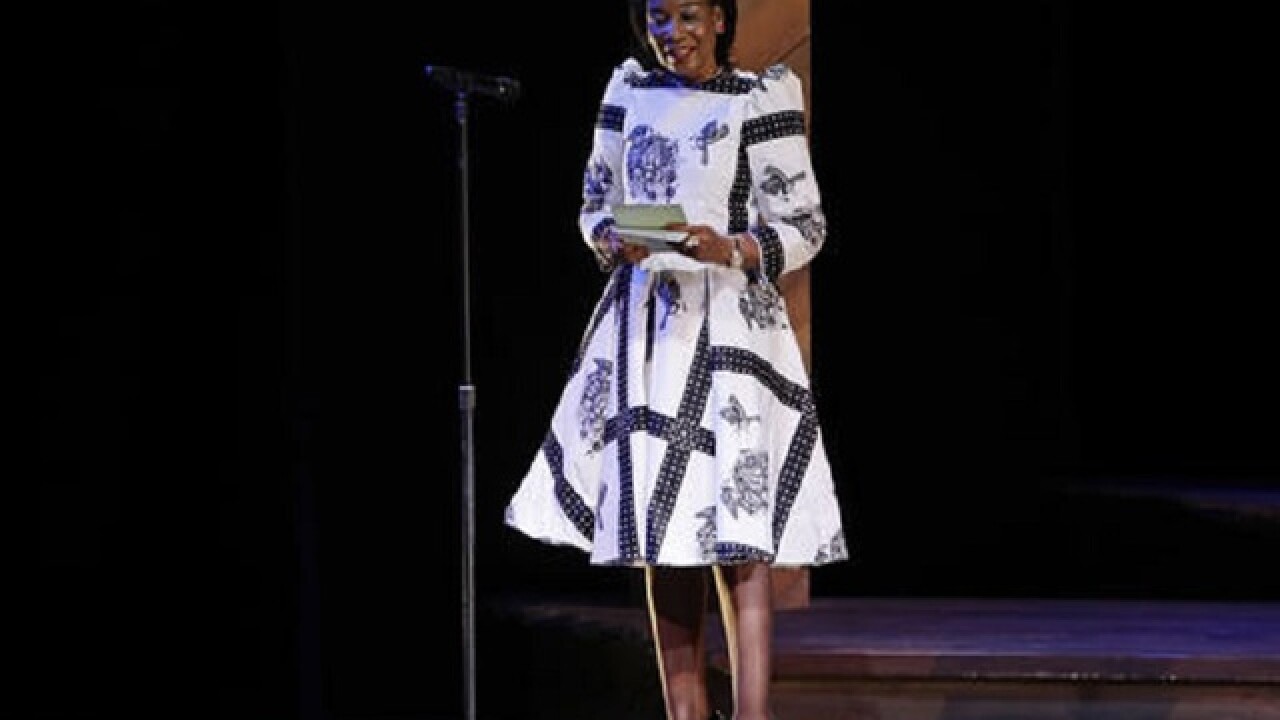 NEW YORK (AP) — Michelle Obama tapped some big voices to help deliver her push to get girls educated across the world.
The U.S. first lady went to Broadway on Monday to host a concert for the spouses of global heads of state that included performances from the female-centric shows "The Color Purple," ''Waitress," ''Wicked" and "Beautiful: The Carole King Musical."
"More than 62 million girls around the world are counting on us to be their voice," Obama said. "And I intend to continue speaking out on their behalf — not just for the rest of my time as first lady but for the rest of my life. And I hope that you all will join me."
The concert was held at the Bernard B. Jacobs Theatre — the normal home of "The Color Purple" — as part of the Let Girls Learn initiative, which encourages world leaders to provide education opportunities to millions of girls globally who do not attend school.
"When people hear stories of girls who aren't in school, they want to help. And as spouses of world leaders, so many of us here in this room have a platform that we can use to tell these stories and bring people together to take action for these girls. Because people will pick up the phone when we call," Obama said.
The event, emceed by TV talk show host Stephen Colbert, took advantage of the gathering of world leaders in New York for the opening of the 71st United Nations General Assembly. More than 50 spouses attended, along with public school children and girl scouts who packed the theater.
Colbert joked that Michelle Obama is one of the most admired women in the world "despite her constantly telling everyone to eat their vegetables." She hit the stage to a thundering ovation.
Remarks also were made by three girls from Jordan, Pakistan and Malawi about the work in their home countries still needed for adolescent girls, as well as songwriter Sara Bareilles, Jordan's Queen Rania, and Gertrude Mutharika, the first lady of Malawi.
Bareilles, who wrote the songs "Brave" and "Love Song," helped create the musical "Waitress," the first-ever Broadway musical with an all-female creative team. She joked that she didn't even notice that at first.
"What a gift that was — that I was given an opportunity to be so seen and so empowered and so trusted and so reflective of my environment that I actually for a moment forgot to notice how rare it was," Bareilles said.
"That is my wish for girls all over the world: That they get the chance and the opportunity to see themselves reflected in the world around them."
The 90-minute event included the 2016 best actress Tony Award winner Cynthia Erivo singing a powerful "I'm Here" from "The Color Purple," Jennifer DiNoia and Carrie St. Louis singing "For Good" from "Wicked," the performers Charity Angel Dawson, Stephanie Torns and Jenna Ushkowitz singing "A Soft Place to Land" from "Waitress," and a medley of songs by Carole King led by Chilina Kennedy.
Copyright 2016 The Associated Press. All rights reserved. This material may not be published, broadcast, rewritten or redistributed.