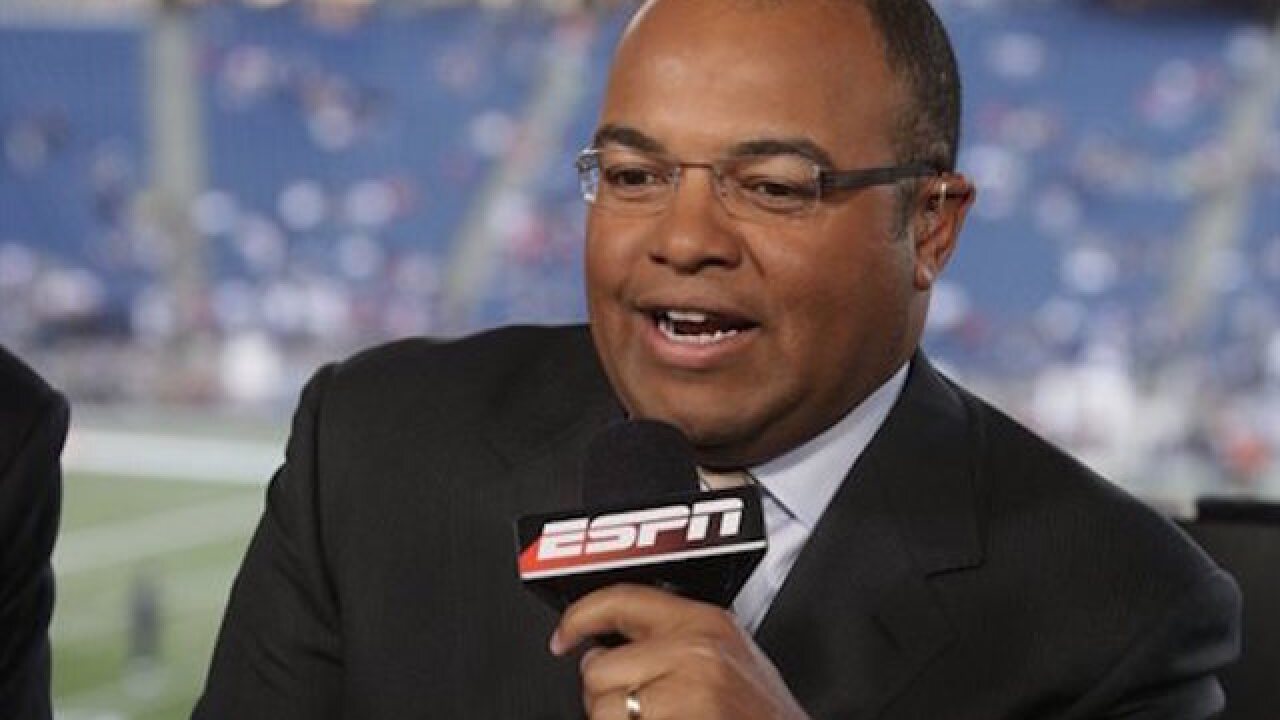 Copyright 2018 Scripps Media, Inc. All rights reserved. This material may not be published, broadcast, rewritten, or redistributed.
Steven Senne
FILE - In this Sept. 14, 2009, file photo, ESPN broadcaster Mike Tirico speaks before an NFL football game between the New England Patriots and the Buffalo Bills in Foxborough, Mass. NBC announced Monday, May 9, 2016, that it had hired Tirico from ESPN. Tirico spent a quarter-century at ESPN, where he had handled play-by-play for "Monday Night Football" since 2006. (AP Photo/Steven Senne, File)

NEW YORK (AP) — Mike Tirico will take part in NBC's Olympic coverage in Rio this summer after he joins the network July 1.

NBC formally announced Monday that Tirico was leaving ESPN after a quarter-century. Details about Tirico's assignments won't be revealed until after he completes his contract at ESPN at the end of June, NBC Sports executive producer Sam Flood said on a conference call.

The network did say in a news release that Tirico, who is leaving behind the "Monday Night Football" play-by-play gig, would be involved in its Sunday and Thursday prime-time NFL broadcasts. NBC is adding five Thursday games this fall, creating an immediate play-by-play opportunity there.

Tirico emphasized that his new job at NBC is a long-term proposition. And while he and Flood didn't want to get into specifics, the deal could eventually lead to the possibility of replacing Al Michaels on "Sunday Night Football" and Bob Costas as the Olympic host.

Tirico said he would have stayed at ESPN if not for the "championship-level events" NBC offers. The chance to work the Olympics was "at the top of the list" of his new network's appeal, he said.

NBC is also taking over coverage of the British Open this summer, and the network said Tirico's responsibilities will include golf. Plus NBC is in the Super Bowl rotation, which ESPN isn't.

Tirico joined ESPN as a "SportsCenter" anchor in 1991 and became one of the most versatile commentators in sports, working studio shows and handling play-by-play for a wide variety of events. He was picked as the play-by-play announcer for "Monday Night Football" in 2006.