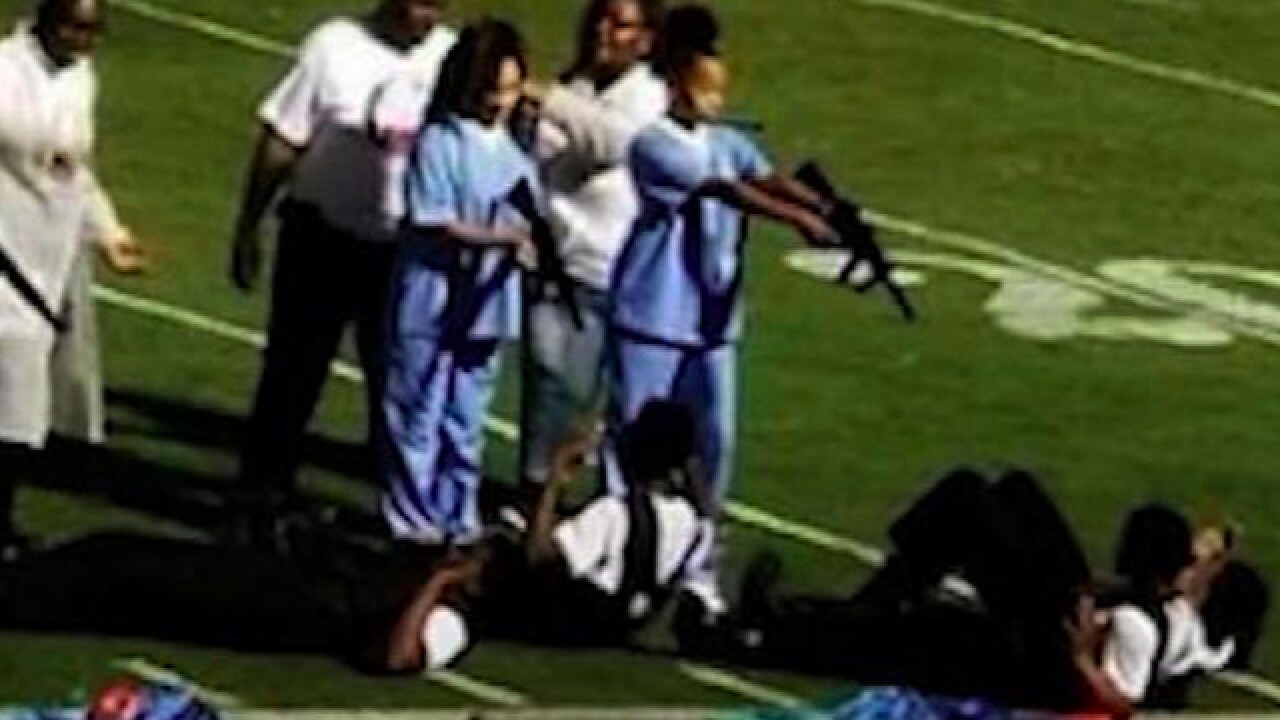 A Mississippi school district has apologized and a high school band director has been suspended after the band staged a halftime skit that depicted police being held at gunpoint.

The controversial skit came as the Forest Hill High School band from Jackson performed Friday during a football game against Brookhaven High School to the south. It shocked many at the game in Brookhaven, where just six days earlier two police officers were killed in a shootout with a suspect.

"I was sad because of what happened last weekend, and it felt like they were making fun of it," Sarah McDonald, a Brookhaven High School student, told CNN affiliate WJTV.

A woman who said she was a graduate of Brookhaven High School found the performance insensitive.

"I was shocked by the halftime performance just because of everything that our community is going through," the woman told CNN affiliate WLBT. "No disrespect to Forest Hill, when they decided to do a performance, they should've took that into consideration that we were already going through a lot at this time. We are still trying to figure out what needs to be done about the situation."

The episode outraged people around the state and has drawn criticism from Mississippi's governor, who called it "unacceptable."

"(Jackson Public Schools) has a great deal of respect and appreciation for our law enforcement partners," Superintendent Errick L. Greene said in a statement. "The band's performance does not depict the values and people in our community, and was incredibly insensitive to the students, families, law enforcement officials and the entire Brookhaven community. For this we sincerely apologize to all, and we pledge to do better in the future."

Greene said the skit was inspired by "John Q," a 2002 movie starring Denzel Washington in which a father holds staff at a hospital hostage to get a heart transplant for his dying son. He did not explain what the movie has to do with football or the school community.

The superintendent said the district had taken "some initial actions" regarding the skit.

"You have my commitment that we will investigate it fully and take additional appropriate action with respect to procedures and personnel," Greene said.

Brookhaven High School has filed a formal complaint with the Mississippi High School Activities Association. CNN reached out to the association for comment and is waiting to hear back.

The Brookhaven School District also put out a statement, affirming its support for local law enforcement.

"The halftime show performed by the visiting band during (Friday) night's game was an unfortunate issue that our district had no prior knowledge of and does not condone," the district said. "Our main focus remains, as always, on the safety of our students and the student-athletes performing on our fields. We appreciate our community's support as we continue working to ensure a positive environment of sportsmanship for our student-athletes and those visiting Brookhaven."

Walter Armstrong, president of the Mississippi Association of Chiefs of Police, called the skit "deplorable, disgusting, and outrageous."

"It is never okay for students to participate in something that defiles and desecrates a law enforcement officer," Armstrong said in a statement. "The adults in charge here should know better."

The Facebook page of Forest Hill High School has been flooded with angry comments. Even Mississippi's governor went to Twitter to express his disgust.

"This is unacceptable in a civilized society," Gov. Phil Bryant tweeted. "Someone should be held accountable."

The two Brookhaven police officers were killed in a shootout early on September 29.

The officers -- identified as Cpl. Zach Moak, 31, and Patrolman James White, 35 -- were responding to an early morning call about shots fired when they were attacked.

A suspect, Marquis Aaron Flowers, 25, of Brookhaven, was wounded in an exchange of gunfire with the officers.

Moak had been on the job since 2015 and was recently promoted to corporal, Brookhaven Police Chief Kenneth Collins said. White returned to the department in 2015 after an earlier stint there.

"These were two awesome people who lost their lives this morning in the line of duty," Collins said.