Most Americans want to lose weight, but only half are trying

This Thanksgiving, many Americans will stuff themselves silly in the spirit of thanks. But after the turkey dries, the sweet potatoes curdle and the gravy coagulates, it's back to the status quo.

For a majority of Americans, that means being unhappy about their weight but shrugging it off, according to a new Gallup study.

Americans' descriptions of their weight are “at odds with reality,” the study said.

More than half of the 828 respondents said they wanted to lose weight. But only a quarter of them said they were seriously trying. Despite a desire to shed pounds, just one-third admitted they had a weight problem to begin with.

“This doesn't mesh with actual figures,” the study said.

In reality, two-thirds of Americans are overweight or obese, according to the National Institutes of Health.

While most said they were not happy about their weight in the Gallup poll, a growing number are getting used to it. Four in ten said they are happy with their current weight – the most since 1996. 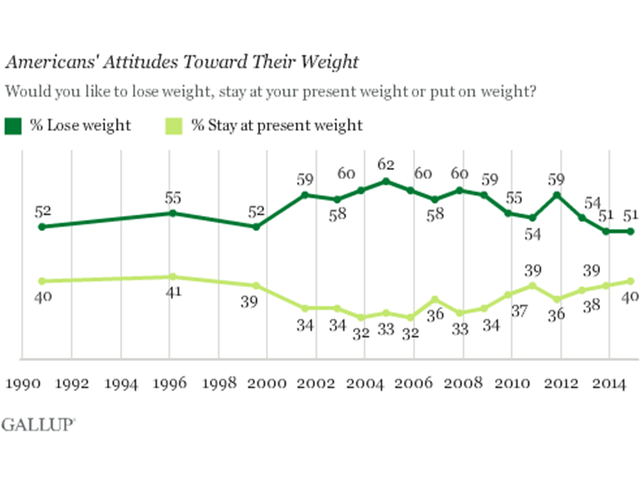 Yet despite being thinner, half of 1990's Americans identified themselves as overweight, compared to one-third today. Somewhere between Michael Jackson and One Direction, reality and perception went their separate ways.

Gavin Stern is a national digital producer for the Scripps National Desk. Follow him on twitter at @GavinStern or email him at gavin.stern@scripps.com.