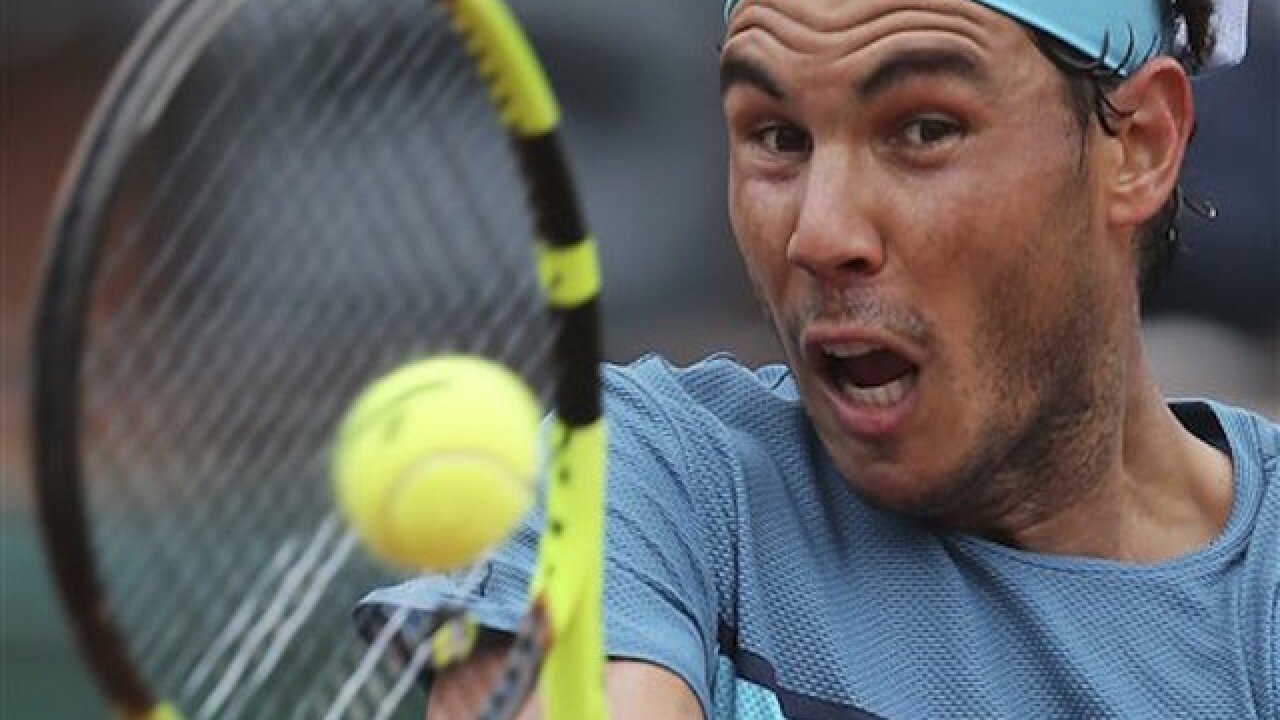 PARIS (AP) — Rafael Nadal set another milestone at the French Open on Thursday, posting the 200th Grand Slam match win of his career.

Nadal got off a sluggish start but once he got into his swing, he was in control. The record nine-time champion at Roland Garros ended up beating Facundo Bagnis 6-3, 6-0, 6-3 to become the eighth man in history to win 200 matches at major tournaments.

Novak Djokovic, who ended Nadal's 39-match winning streak at Roland Garros last year in the quarterfinals, joined the Spaniard in the third round. The top-ranked Serb was far from his best, hitting 42 unforced errors against Belgian qualifier Steve Darcis, but his mistakes did not prevent him from advancing 7-5, 6-3, 6-4.

The man with the most wins at majors is Roger Federer, who has 302 over his career but is missing from this year's French Open because of injury.

"I think this year I played better than last year," said Nadal, who has been in fine form in the buildup to the French Open, winning titles in Monte Carlo and Barcelona.

"I've been able to play some really good matches against the best players in the world," Nadal said. "I'm very happy to be competitive again."

Chasing the only Grand Slam tournament missing from his trophy collection, Djokovic won his 50th match at Roland Garros by defeating Darcis. Djokovic said he struggled to cope with his opponent's speed from the baseline.

The other men with 50 victories at the French Open — Nadal, Federer, Guillermo Vilas, Ivan Lendl, Andre Agassi and Nicola Pietrangeli —all won at least one title at the clay-court tournament.

Djokovic, who has lost in the final on the red clay in three of the last four years, and Nadal could meet in the semifinals this year.

After dropping his first service game, Nadal converted his two break chances and sealed the first set in 39 minutes. Nadal was warned for a time violation on his first set point but he served out the set on his second occasion after Bagnis went long following a baseline rally.

Nadal broke at the start of the second set with a crosscourt forehand attack and a service winner wrapped it up 20 minutes later.

The 99th-ranked Bagnis, who has never gotten beyond the second round at a major tournament, dropped his serve again at the start of the third set. The Argentine left-hander saved a match point in the eighth game and managed to break his rival, only to drop his next service game and the match.

In the women's draw, Kiki Bertens extended her winning run to nine matches to reach the third round with a 6-4, 6-1 victory over Camila Giorgi.

Bertens, who upset Australian Open champion Angelique Kerber in the previous round, won the Nuremberg tournament last week as a qualifier.

Former French Open champion Ana Ivanovic reached the third round, too, hitting 35 winners in a 7-5, 6-1 win over Kurumi Nara.

"When I'm in a good position, I feel I strike it much better," said Ivanovic, who won in Paris in 2008. "Today that was the case. And I knew I had to be aggressive and move well against her, also take time away from her, because she's great player."