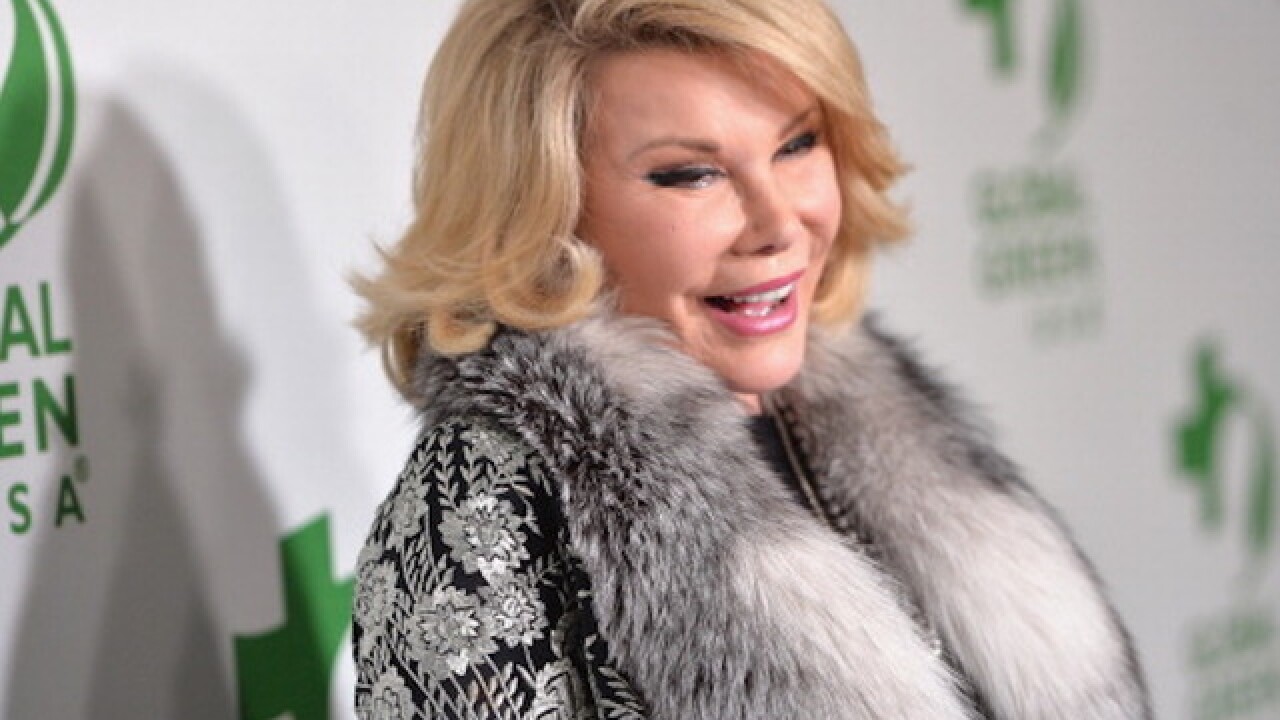 NEW YORK (AP) — The family of comedian Joan Rivers, who died days after undergoing a routine endoscopy at a New York City clinic, has settled a medical malpractice lawsuit against the facility, the family's attorneys said Thursday.

The 81-year-old comedian and star of the show "Fashion Police" on E! died Sept. 4, 2014, days after she went in for a routine procedure at Yorkville Endoscopy on Manhattan's Upper West Side and stopped breathing. Her daughter, Melissa Rivers, filed a medical malpractice lawsuit in 2015 in state Supreme Court in Manhattan that alleged doctors performed unauthorized medical procedures, snapped a selfie with the comedian and failed to act as her vital signs deteriorated.

In announcing the settlement Thursday, Rivers' attorneys said they were pleased that the case had been resolved, but declined to specify the amount of the settlement. They wanted to "make certain that the focus of this horrific incident remains on improved patient care and the legacy of Joan Rivers," attorneys Ben Rubinowitz and Jeff Bloom said in a statement.

Melissa Rivers said the settlement allows her to "put the legal aspects of my mother's death behind me and ensure that those culpable for her death have accepted responsibility for their actions quickly and without equivocation."

She said in the statement issued by her lawyers that she will continue working to ensure higher safety standards at out-patient surgical clinics.

The lawsuit had alleged that doctors at the clinic mishandled Rivers' endoscopy and performed another procedure, known as a laryngoscopy, on Rivers' vocal cords without consent. The suit claimed that an anesthesiologist expressed concern over what the procedure would do to Rivers' ability to breathe, but was told she was being "paranoid" by the gastroenterologist performing the endoscopy.

The city's medical examiner found that Joan Rivers died of brain damage due to lack of oxygen after she stopped breathing during the endoscopy. Her death was classified as a therapeutic complication. The classification is not commonly used; more deaths are certified as accidents, homicides, suicides or natural causes. Negligence was not suspected. Had it been, it would have been listed as a contributing cause.

The clinic, Yorkville Endoscopy, did not immediately respond to a request for comment from The Associated Press on Thursday.

The federal Centers for Medicare and Medicaid Services found after an investigation that the clinic made several errors, including failing to keep proper medication records and snapping cellphone photos. The investigation also found that the clinic had failed to receive informed consent for every procedure performed and failed to record Rivers' weight before administering sedation medication.