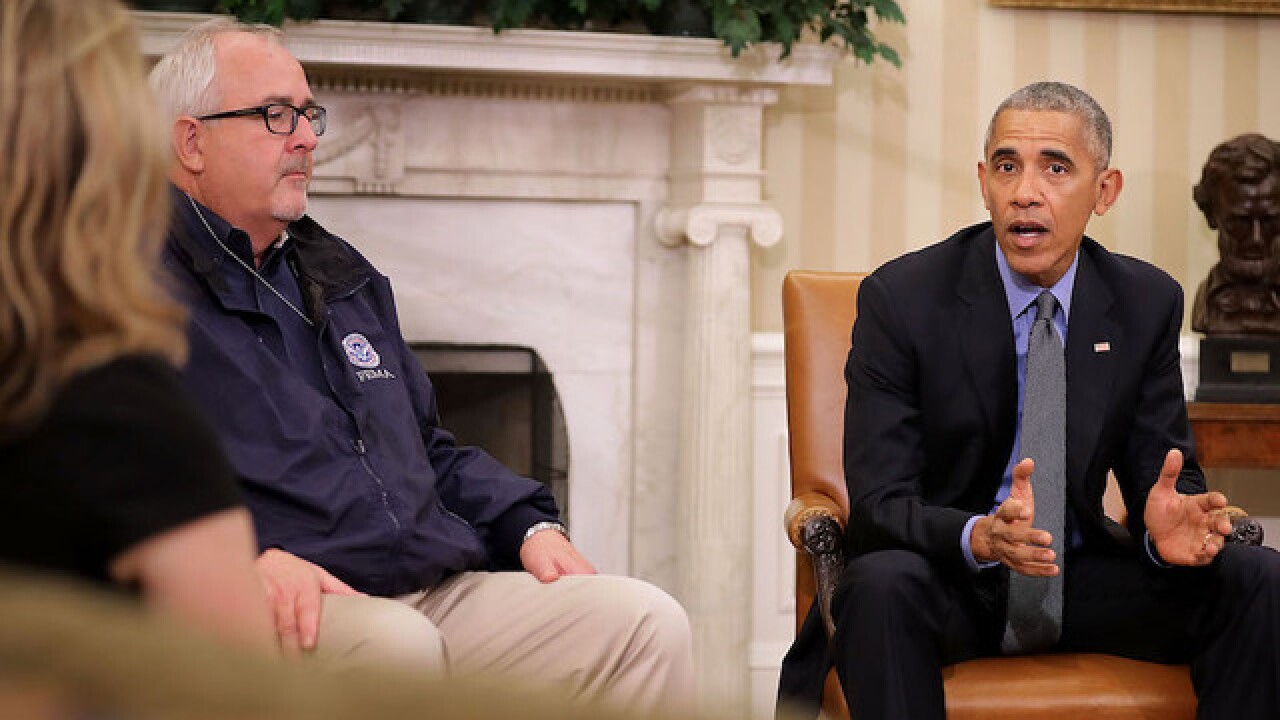 Copyright Getty Images
Chip Somodevilla
<p>WASHINGTON, DC - OCTOBER 07: U.S. President Barack Obama (R) talks with reporters after meeting with Federal Emergency Managment Agency Administrator Craig Fugate and other homeland security officials to discuss Hurricane Matthew in the Oval Office at the White House October 7, 2016 in Washington, DC. The hurricane is now a category 3 and is headed for Florida after wreaking havoc in Haiti, Cuba and the Bahamas. (Photo by Chip Somodevilla/Getty Images)</p>

President Barack Obama on Friday morning addressed the nation regarding Hurricane Matthew, and urged Georgians to especially heed warnings about the storm.

In his statement, Obama said the government is still tracking what happened in Haiti. The country's central government's official death toll stood at nearly 300 Friday morning, but authorities working doing the on-ground assessment in the remote corners of the southwestern peninsula said it would likely be significantly higher when the full accounting was complete.'

Workers from the International Organization of Migration and other groups were going through the area to assess the damage and provide assistance, though their efforts were hampered by damaged roads, rough terrain and other factors.

Hurricane Matthew was downgraded to a Category 3 hurricane overnight with the strongest winds of 120 mph just offshore as the storm pushed north, threatening hundreds of miles of coastline in Florida, Georgia and South Carolina. A 107 mph gust was recorded in Cape Canaveral.

Two million people were told to move inland to escape a potentially catastrophic blow from a storm that left more than 280 dead in its wake across the Caribbean, but many hunkered down and hoped for the best.

Some people who refused to evacuate were stranded and called for help early Friday, but were told to stay put until conditions improved enough for paramedics and firefighters to get to them, said Brevard County Emergency Operations spokesman David Waters.

"A family called in that the roof just flew off their home on Merritt Island," Waters said.

It was a scene officials hoped to avoid in other cities as the storm pushed north.

In Jacksonville, where 500,000 people were told to evacuate, Mayor Lenny Curry warned that authorities would not be able to help them during the worst of the storm.

"You need to leave, if you do not leave you will be on your own," Curry said.

Despite dire warnings, many people along the Florida coast decided to take their chances.