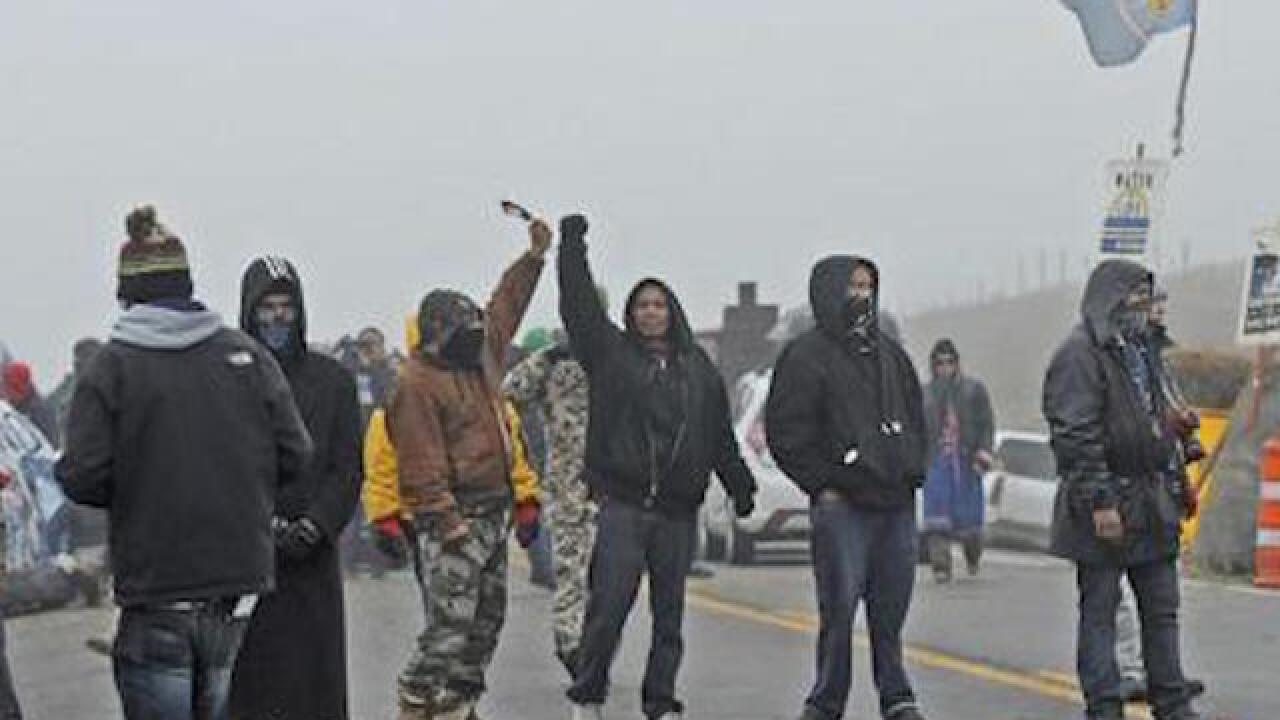 Copyright Associated Press
Tom Stromme
<p>TOM STROMME/Tribune People covered the roadway of Highway 1806 at the site of the New Camp on Pipeline Easement on Wednesday morning.</p>

Several protesters were led away and put in trucks, including at least one handcuffed, as authorities converged on the camp in North Dakota.

Law enforcement officers and soldiers driving trucks, military Humvees and buses began to advance at midday and formed a horseshoe-like loop once they reached the camp, where about 200 protesters were awaiting them — some defiant and other praying.

Officials used a loudspeaker to warn protesters to move out. Two helicopters and an airplane monitored the operation from the air.

The operation to push out the protesters began a day after they had refused to leave voluntarily.

The confrontation escalated a dispute that has raged for months. Protesters moved in over the weekend to establish a camp on private land where the developer was working to complete the 1,200-mile pipeline designed to carry oil from western North Dakota to Illinois. The route of the pipeline skirts the Standing Rock Reservation and the tribe says it could endanger water supplies and disturb cultural sites. The state of North Dakota says no sensitive cultural sites have been found in the area.

The area authorities were clearing on Thursday is just to the north of a more permanent and larger encampment on federally-owned land where hundreds of protesters, including Native Americans from across North America, environmentalists and some celebrities, have lived through the summer and fall.

"I can't stress it enough, this is a public safety issue," he said. "We cannot have protesters blocking county roads, blocking state highways or trespassing on private property."

"If they take everybody to jail, there will be twice as many tomorrow, and every day that passes more will come," he said.

Law enforcement officials demanded that the protesters leave the private land on Wednesday, but they refused. Thick fog and cloudy skies on Wednesday appeared to stall the law enforcement effort, but the sun came out on Thursday with scattered clouds and a light breeze. Officials have frequently monitored protesters by air.

The Federal Aviation Administration is restricting flights over the Cannon Ball area until Nov. 5, allowing only aircraft affiliated with the North Dakota Tactical Operation Center and banning drones.

The protest has drawn the attention of activists and celebrities, including actress-activist Shailene Woodley and Green Party presidential candidate Jill Stein. Civil rights activist Jesse Jackson and actor Mark Ruffalo were at the protest camp Wednesday but departed later in the day.