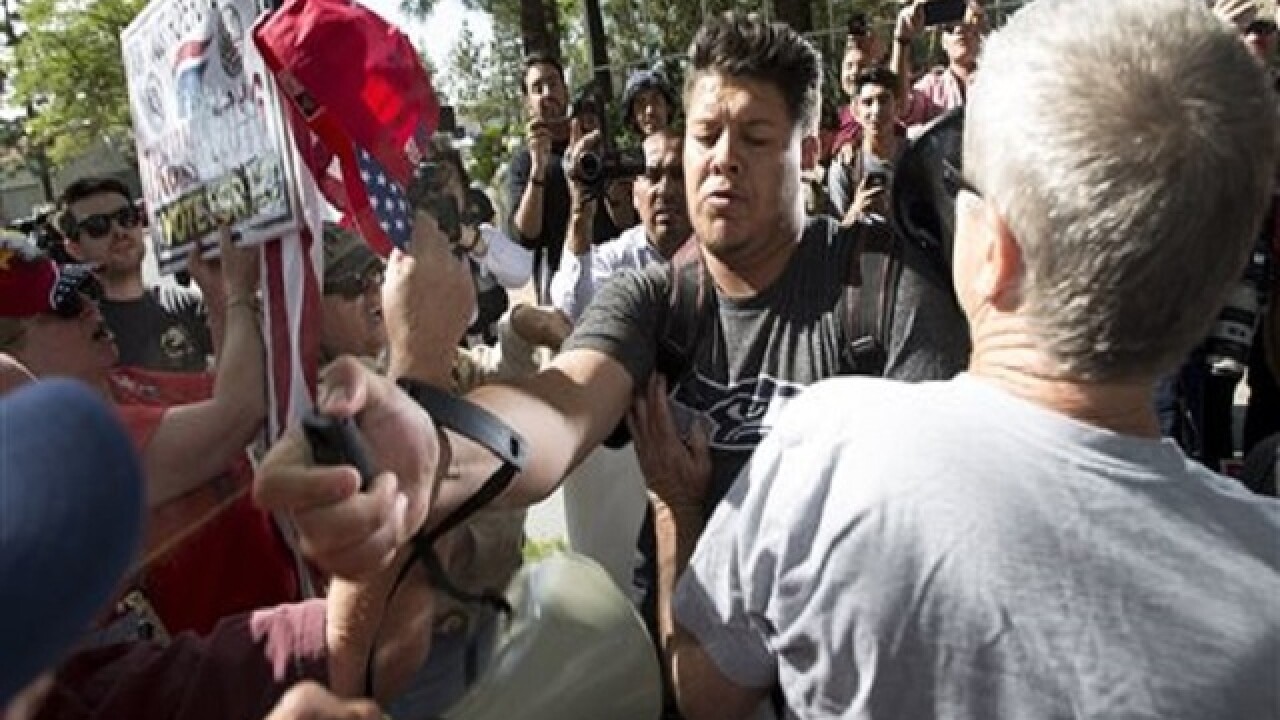 ANAHEIM, Calif. (AP) — Supporters and opponents of Donald Trump clashed Tuesday outside City Hall, and five people, including two little girls, were pepper-sprayed by a demonstrator during the heated confrontation, police said.
No serious injuries and no arrests were reported in the clash as about 50 people confronted each other in the Orange County community.
Backers waving U.S. flags and pro-Trump signs were met by opponents and a shouting match began before a City Council meeting where an anti-Trump resolution had been proposed that the council eventually chose to take no action on.
At one point, an opponent unleashed a hand-held pepper-spray device on the pro-Trump crowd.
Five people, including two girls ages 8 and 11, were exposed to the eye-stinging spray, police Sgt. Daron Wyatt said. Three were treated at the scene by paramedics.
The man fled, but police were looking for him, Wyatt said.
One woman wearing a red "Make America Great Again" hat comforted the girls, whose faces were streaked with tears. The girls complained that their eyes and mouths hurt.
"I can feel it now, it's pungent," the woman, Lilia Zapatos, told KNBC-TV minutes after she was sprayed.
Linda Reedy of Laguna Niguel, a member of the pro-Trump group We the People Rising, pressed an ice pack to her face after being hit by the spray.
The anti-Trump group goaded her and her friends, and one man jumped on one of her friends, she said.
"I just think they're so out of control," Reedy told the Los Angeles Times. "I'm so sick of the anger in this country."
The confrontation occurred before the City Council discussed a resolution proposed by one councilwoman condemning what it called Trump's divisive rhetoric.
The motion said Trump's remarks — which have been perceived as offensive to Mexican immigrants, Muslims and other groups — are contrary to Constitutional principles and don't reflect Anaheim's "guiding principles of inclusiveness and kindness."
The arguments from outside continued during the public comment period inside, but remained civil as the meeting stretched for hours into the night. Eventually the council voted 3-2 to take no action on the resolution.
The clash came as Trump scored a five-state East Coast sweep Tuesday to embolden his hopes of clinching the Republican presidential nomination without a battle at the convention.
Associated Press 2016