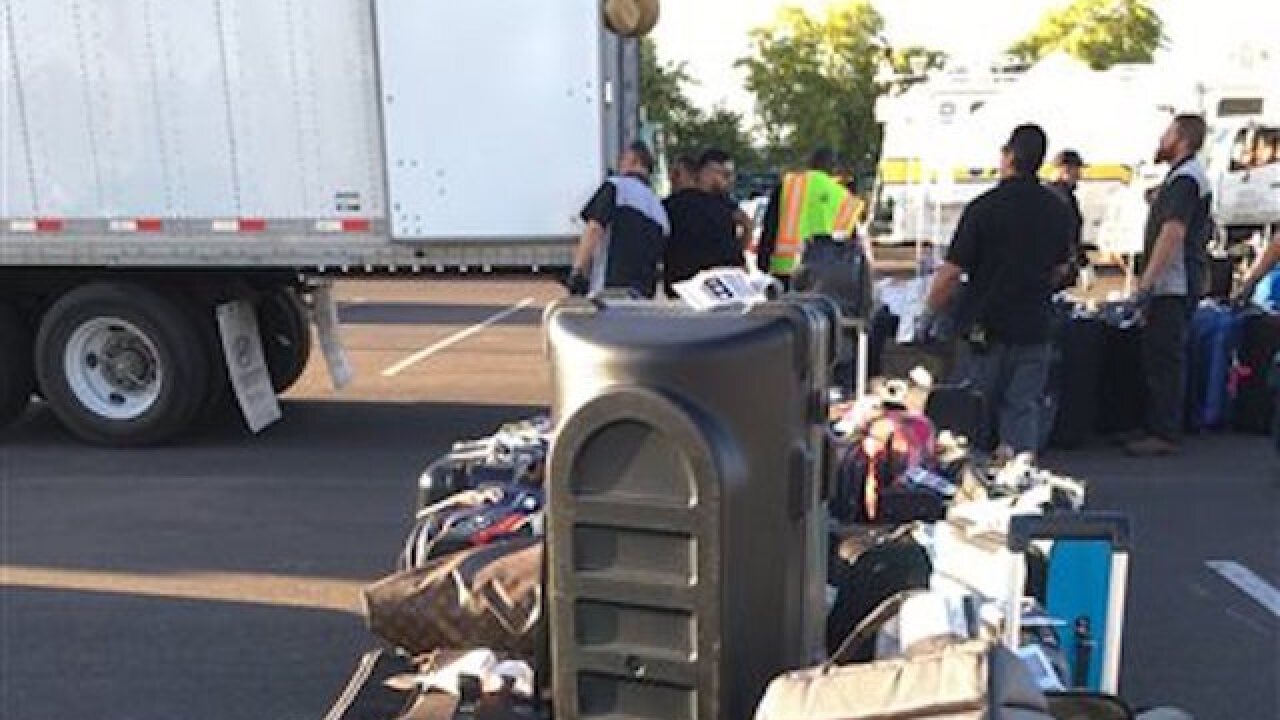 Copyright Associated Press
Anna Johnson
<p>In this Thursday, May 12, 2016 photo workers put passenger luggage on a semi truck at Sky Harbor International Airport in Phoenix. More than 3,000 checked bags missed their outbound flights in Phoenix because of a problem with a screening system at The airport officials with Transportation Security Administration said. (AP Photo/Anna Johnson)</p>

PHOENIX (AP) — Bags jammed a parking lot at the Phoenix airport as they waited to be shipped by ground to other cities for safety checks, among thousands that missed their flights because of problems with the federal system that screens luggage for explosives.

"Significant, unprecedented" technical issues with a computer server on Thursday led more than 3,000 checked bags to miss their flights out of Phoenix Sky Harbor International Airport, but the glitch has since been fixed, said Nico Melendez, a Transportation Security Administration spokesman.

The TSA screening systems were working normally Friday, and the bags that were delayed a day earlier were on their way to passengers, Melendez said. But tests were continuing because it was not clear what caused the glitch, he said.

The problem with the screening systems began around 6:45 a.m. and only affected the Phoenix airport. It was not immediately known how many of the airport's 16 airlines faced bag delays, but Southwest was significantly affected, Melendez said.

"We are not seeing widespread flight delays, but many checked bags are missing flights," said Julie Rodriguez, a Sky Harbor spokeswoman.

Luggage that had crowded the airport's three terminals was moved to a parking lot Thursday evening, where workers loaded hundreds of bags onto semitrailers in triple-digit temperatures. Those bags went to airports in Tucson and San Diego for screening and then were flown to their destinations, Rodriguez said.

Cody Desjadon, 22, of Prescott, Arizona, arrived at the airport shortly after 5 p.m. and knew something was off when he saw a parking lot full of police, dogs, and suitcases.

He and his girlfriend, Hannah Brinser, 19, then learned at a Southwest ticket counter that her large suitcase would take two to three days to get to their destination in Missouri.

The couple's main concern was trying to stuff several wrapped gifts for aunts, grandparents and cousins into their two carry-ons.

"It's definitely unfortunate because we're going for a graduation, and there's lots of gifts for the graduation. I don't know if we can fit them all," Desjadon said.

He said a lot of other passengers were more frustrated than he was.

According to the TSA, the baggage systems handle the bulk of checked luggage. When everything is working properly, only about 10 percent of all checked bags are hand-searched by TSA officers.

Nearly 4.3 million passengers traveled through Sky Harbor in March, making it the airport's busiest month ever.