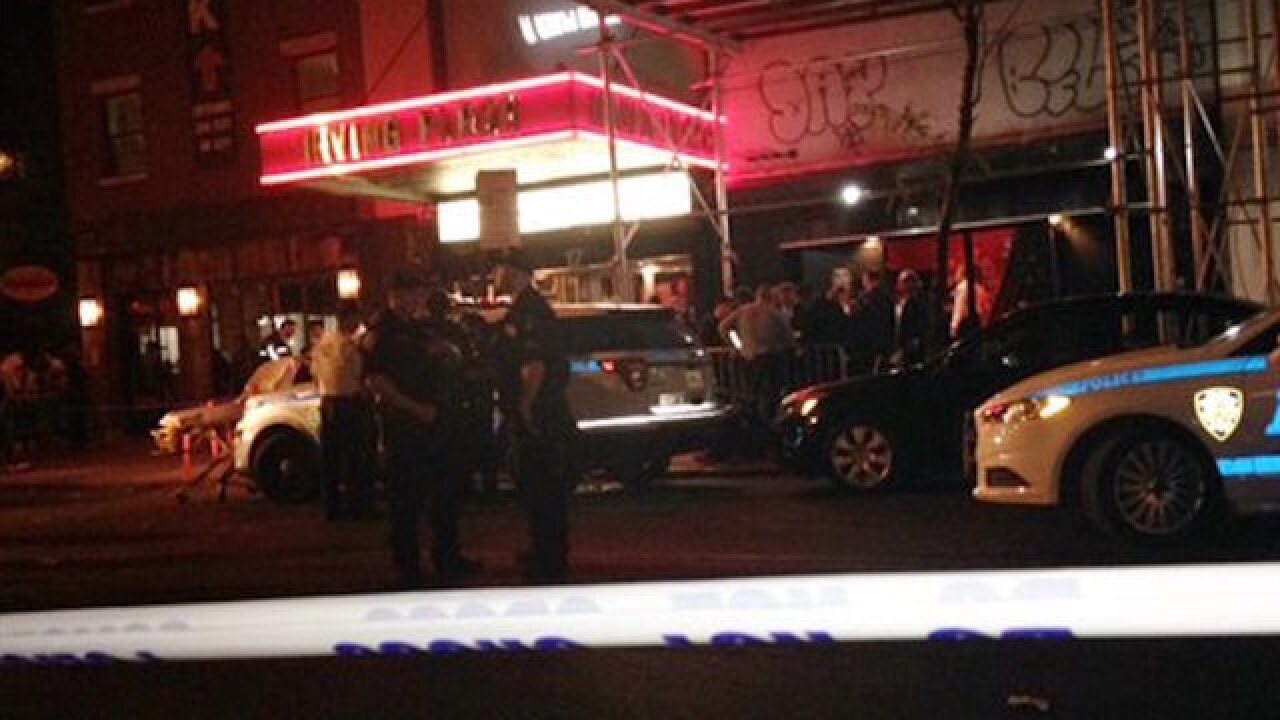 Copyright Associated Press
Dana Schimmel
<p>Authorities stand outside Irving Plaza, near Manhattan's Union Square in New York after a shooting Wednesday, May 25, 2016. Police say several were injured in a deadly shooting inside the concert venue, where hip-hop artist T.I. was scheduled to perform. (AP Photo/Dana Schimmel)</p>

NEW YORK (AP) — New York City's police commissioner says he expects to get to the bottom of a deadly shooting at a hip-hop concert quickly.

Commissioner William Bratton spoke on WOR-AM radio Thursday, hours after shots rang out at a venue where rapper T.I. was getting ready to perform. One person was killed, and three others were injured.

Authorities say a dispute between two groups traveled from a top floor down to outside the green room at the Irving Plaza concert hall. Performers Maino and Uncle Murda were on stage at the time.

Bratton says the investigation is progressing "very rapidly." Police are searching for the gunman.

Bratton says it's not yet clear whether anyone in the performers' entourages was involved. He says many were unwilling to talk with police.

Police on Thursday searched for a man captured on surveillance footage firing a gun outside the green room of a concert venue where hip-hop artist T.I. was set to perform. Four people were shot, one of them fatally.

"The girl next to me was shot point-blank, and men picked her up and carried her out," witness Liv Hoffman told The Associated Press. "For two to three minutes, we still heard firing, still heard shots. We were clutching each other making sure no one was getting hit."

Rapper T.I., whose real name is Clifford Joseph Harris Jr., was among the roughly 1,000 people in Irving Place at the time, authorities said. But performers Maino and Uncle Murda were on stage at the time of the shooting, said William Aubry, Manhattan chief of detectives.

T.I. was not among the injured.

The shooting marks the third time in a decade shootings have occurred during or after concerts where T.I. was to perform.

A member of the rapper's entourage was killed and three others were injured during a gunbattle following a post-concert party where T.I. performed near Cincinnati in 2006. Last March, two people were shot and injured in a Charlotte, North Carolina, nightclub where he was to perform.

In 2010, the Atlanta rapper was sentenced to 11 months in prison on federal gun charges.

His representatives referred questions to police.

Witnesses described a frantic, frightening scene that developed at around 10:15 p.m.

Video from inside the venue showed concertgoers rushing to the sides trying to leave the area as a group of people tended to a person on the floor.

Concertgoer Elijah Rodriguez said he had been in the VIP area by the stage.

"It was scary to deal with. When I got outside, like literally across the street, there were a few girls having, like, panic attacks. One girl thought she saw someone get shot in front of her," Rodriguez said.

Witnesses said security getting into the concert was lax. Police say there was security in place, but how it was carried out is part of the investigation.

Irving Plaza is referring questions about the incident to police.