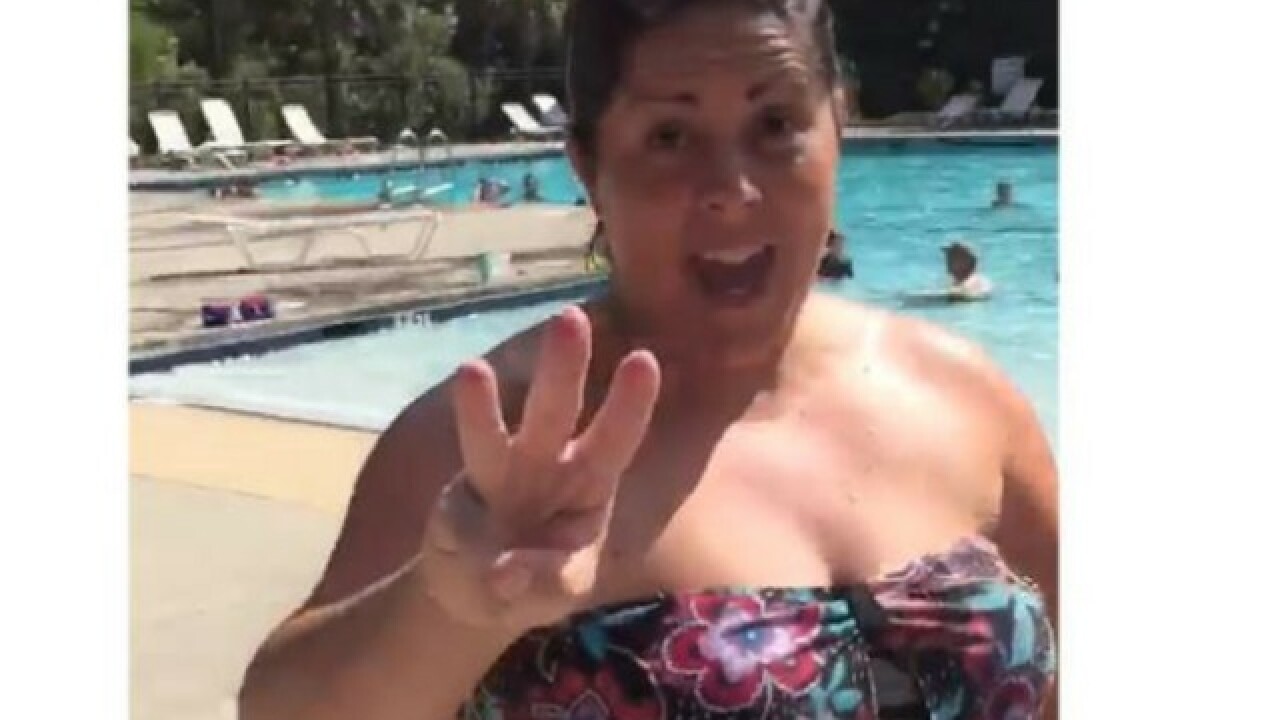 A white woman the internet has nicknamed "Pool Patrol Paula" was charged with assaulting a black teenager at a community pool in South Carolina.

She allegedly shouted racial slurs at the young man and told him he didn't belong there, according to a police report from the Dorchester County Sheriff's Office. Days later, the report said, she attacked the officers who came to arrest her, biting one's arm.

The 15-year-old victim had been invited to swim in the Summerville, South Carolina, pool by a friend, according to the report. The woman, Stephanie Sebby-Strempel, 38, told him to "get out" and hit the boy multiple times before threatening to call the police on Saturday, the report said.

That part was caught on camera. The video was posted to Facebook where it has since been viewed more than one million times.

In the video, filmed by the victim, Sebby-Strempel aggressively swats at the boy's phone camera and hits him as he and his friends leave the pool area, saying, "How's that feel?"

After Sebby-Strempel told them to leave, the victim said they were "respectful and said, yes ma'am" and began to exit the pool, according to the report. He also said that Sebby-Strempel used "racial slurs" and hit him in the chest once and face at least twice. No racial slurs could be heard in the video.

The police concluded that Sebby-Strempel was "clearly the aggressor" in the "unprovoked assault," according to the report.

The story doesn't end there. When officers arrived at her home with a warrant for her arrest on Monday, she pushed one detective into a wall, injuring his knees, and bit a second detective on the arm, breaking the skin, according to the Dorchester County Sheriff's Office.

After that, Sebby-Strempel was charged with two counts of assaulting a police officer while resisting arrest, along with assault and battery for the pool incident.

In a press conference Tuesday, the boy's family spoke out about the incident.

"Basically, this is a situation that should have never happened," Deanna RocQuermore, the victim's mother, told reporters. RocQuermore also commended her son's self control and said she intends to pursue the case against Sebby-Strempel at the "highest level."

"No child including mine or anybody else's ever, ever, deserves that type of abuse or treatment or to be struck not once, not twice, but three times by someone that is upset because of the color of someone's skin, and they feel as though they don't belong at their swimming pool," RocQuermore said.

Facing charges and out of a job

Sebby-Strempel was given a $65,000 bond by a Dorchester County Judge after being jailed for one charge of third degree assault and two counts of assaulting a law enforcement officer while resisting arrest, according to CNN affiliate WCSC.

CNN's attempts to reach Sebby-Strempel and her lawyer were unsuccessful, but WCSC reported that the attorney was not worried about the assault against the minor because there is "more than one side of the story on that charge." It's not known if she has entered a plea.

Sebby-Strempel used to be an independent consultant for skincare company Rodan + Fields, but after her actions, the company said in a statement to CNN that she doesn't work there anymore.

"After assessing statements from law enforcement and determining that this former Independent Consultant's actions violate our policies, she is no longer affiliated with Rodan + Fields," the statement said.

#PoolPatrolPaula is just the latest example

Dubbed by social media as #PoolPatrolPaula, Sebby-Strempel is the latest addition to a trend in which Twitter users are calling out white people for their apparent racism.

Just last week, a white woman now known as #PermitPatty was caught on camera threatening to call the police on a black 8-year-old girl selling water bottles without a permit in San Francisco, California. She told CNN's Dan Simon that her complaint wasn't targeted at any particular person. She said she was under a deadline and was distracted by the shouting coming from outside.

And in May, #BBQBecky, another white woman caught on camera, called the police on a group of black men having a barbeque in an area where grills are prohibited in a park in Oakland, California.

These videos are part of a nationwide conversation about black people being threatened and censured for seemingly harmless acts.

That's why another popular hashtag for the pool incident involving Sebby-Strempel is #SwimmingWhileBlack. It's only the most recent in a long string of mundane activities like golfing, napping, leaving an Airbnb and sitting in Starbucks in which black people have been racially profiled and a white person has called the police.