Puerto Rico mourns, prepares to bury those killed at club 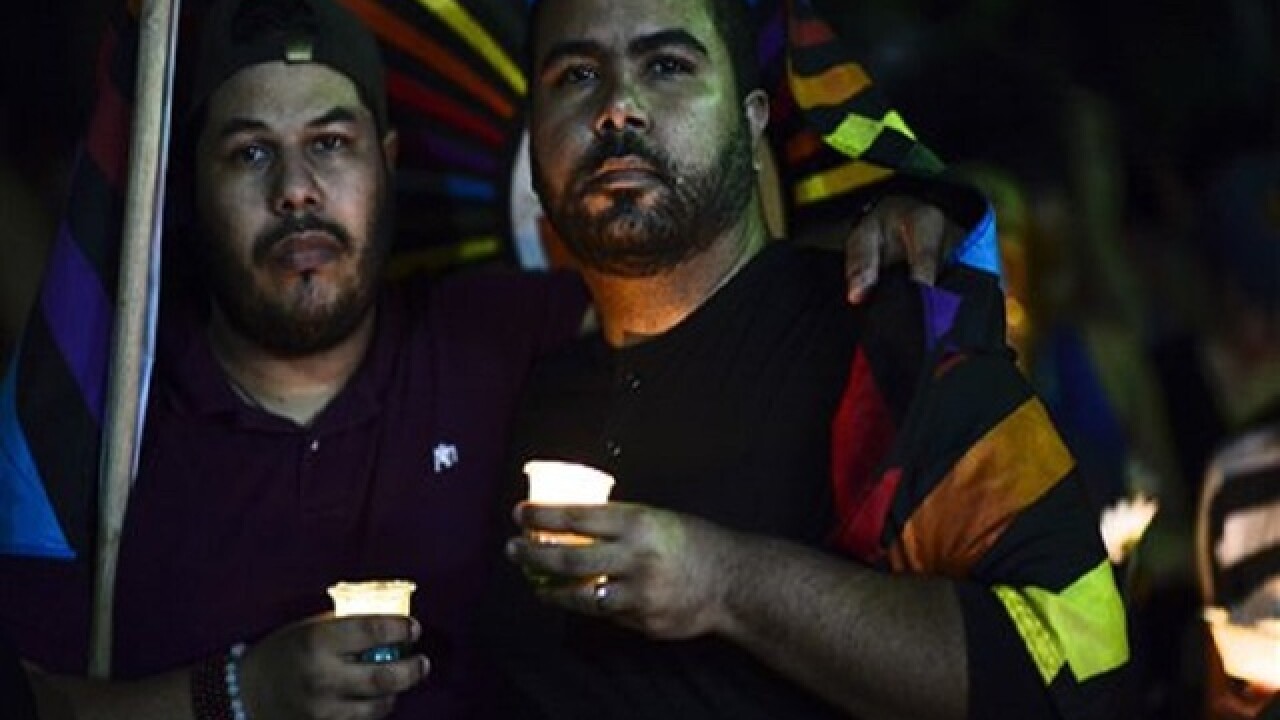 Carlos Giusti
<p>Residents carry out a vigil to honor the memory of the Puerto Ricans that died in the mass shooting at a nightclub in Orlando, Fla., at the Hato Rey LGBTT Community Center in San Juan, Puerto Rico, Tuesday, June 14, 2016. Dozens of people died at the 'Pulse' gay nightclub in Orlando, making it the deadliest mass shooting in modern U.S. history. (AP Photo/Carlos Giusti)</p>

SAN JUAN, Puerto Rico (AP) — Puerto Ricans held somber vigils and prepared to bury many of their own after authorities said nearly half of those killed at a gay nightclub in Florida had ties to the U.S. territory.
Officials said that while it's still unclear how many of the 23 Puerto Ricans killed were born on the U.S. mainland or had moved there from the island, they expect many of them to be laid to rest in Puerto Rico in the coming days.
"We have a lot of family members who have lived in the United States for many years but they want their loved ones buried here," Roberto Padua, sub-secretary of Puerto Rico's State Department, which is helping organize the transfer of the bodies, said Tuesday.
The shooting early Sunday at the Pulse club in Orlando that killed 49 people has shaken Puerto Rico's gay community and shocked the U.S. territory as a whole.
"This is the worst tragedy for Puerto Rico's LGBTT community in our history," said Pedro Julio Serrano, a prominent local gay rights activist. "It's devastating."
He said several families are planning vigils in the United States and then burials in Puerto Rico, adding that several human rights organizations are helping them cover flight and funeral costs.
Several of the Puerto Ricans killed had moved to the U.S. mainland and settled in Orlando to flee a dire economic crisis that has sparked the largest such exodus in decades.
"They thought they were going to have more freedom over there, only to be met with death," Serrano said. "There's a lot of hate in the world against the LGBTT community. Neither Orlando, nor Puerto Rico, nor the world are safe places."
More than 300 people gathered for a vigil late Tuesday in the capital of San Juan to honor those killed by 29-year-old Omar Mateen, who attacked club-goers wielding an AR-15 semi-automatic rifle and a handgun.
Among those attending the vigil was Pedro Catalan, a 52-year-old history teacher who said the news hit the island particularly hard because of its ties with Orlando, which has one of the largest populations of Puerto Ricans in the U.S.
"This hurt us because we saw ourselves in the shoes of each and every one of them," he said of the victims. "We identify with all of them."
San Juan Mayor Carmen Yulin Cruz said the killing reverberated through the island to such an extent that some children asked their parents at another vigil whether they were going to be killed because they had two mothers.
She urged all Puerto Ricans to double their efforts in fighting homophobia as she paid tribute to the victims.
"They are the sons and daughters of an island that demands justice," Cruz said.
At least five of the victims were from Ponce, Puerto Rico's second largest city. Some 200 people had gathered in that southern coastal city on Monday to honor the victims, many of who were musicians and dancers. Among them was 25-year-old Leroy Valentin, who played in Ponce's municipal band for a decade and was member of a dance group before moving to Orlando just three months ago. Two of the other victims had been vacationing in Orlando.
Ponce's mayor told reporters she was donating plots at the city's municipal cemetery to the victims' families, while Puerto Rico's governor declared Friday a day of mourning.
Luis Aponte Martinez, a 25-year-old Puerto Rico nurse who was friends with one of the victims, said that unfortunately it took a killing to bring more attention to the challenges and violence that the gay community still faces.
"Tragedy often leads to more rights," he said. "We are still discriminated against in the middle of the 21st century."
Copyright 2016 The Associated Press. All rights reserved. This material may not be published, broadcast, rewritten or redistributed.