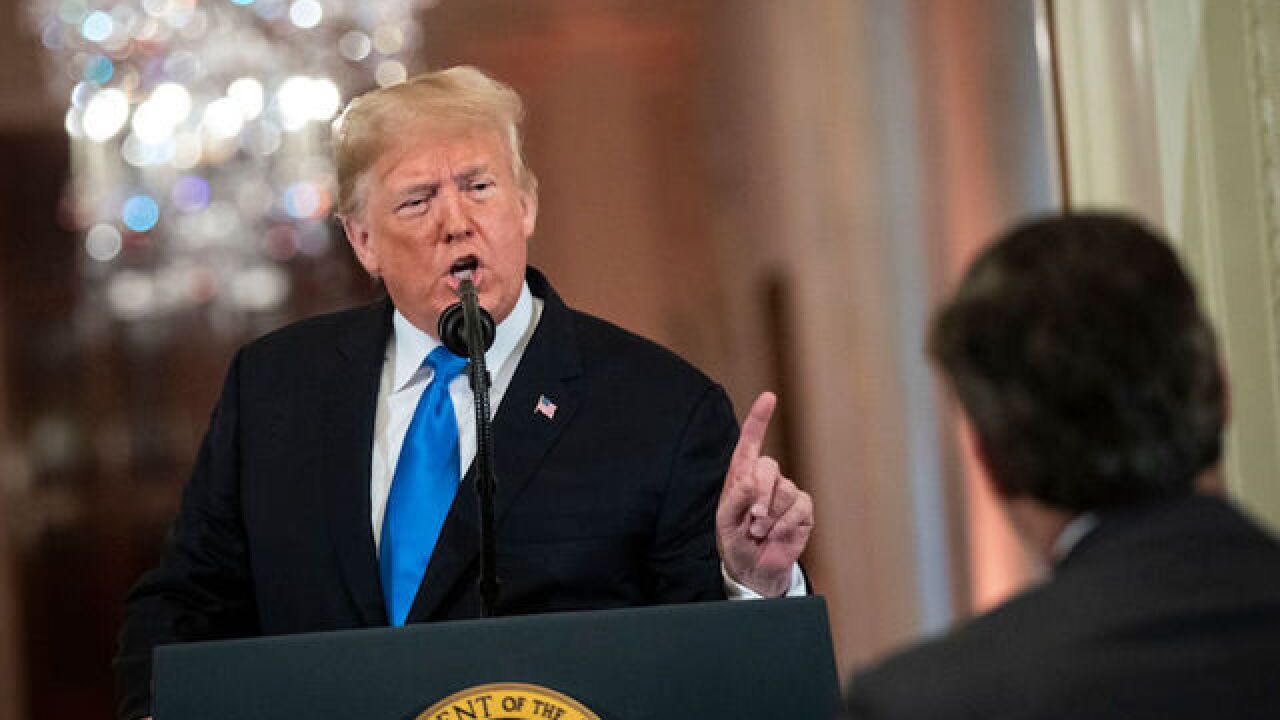 Image copyright 2018 Getty Images. All rights reserved. This material may not be published, broadcast, rewritten, or redistributed.
Al Drago
<p>WASHINGTON, DC - NOVEMBER 07: (AFP OUT) U.S. President Donald Trump gets into an exchange with CNN reporter Jim Acosta during a news conference a day after the midterm elections on November 7, 2018 in the East Room of the White House in Washington, DC. Republicans kept the Senate majority but lost control of the House to the Democrats. (Photo by Al Drago - Pool/Getty Images)</p>

Reporters from many news organizations have expressed support for CNN's Jim Acosta after the White House revoked his press pass.

The "hard pass," which speeds up entry to the White House grounds, was suspended by the Trump administration on Wednesday night "until further notice." Why? Because of Acosta's combative exchange with President Donald Trump at his post-midterms press conference.

It is unclear whether Acosta will be turned away again on Thursday. It also remains to be seen whether White House reporters will walk out, or show solidarity with Acosta and CNN in other ways.

Acosta is CNN's chief White House correspondent. He was trying to reenter the White House grounds for a live shot on "Anderson Cooper 360" when he was stopped by Secret Service officers. Within minutes, White House press secretary Sarah Sanders had announced the suspension.

"This is a test for all of us," Acosta told Cooper later. "I do think they are trying to shut us down, to some extent, inside the White House press corps." Acosta said he thought the suspension was also an attempt to "send a message to our colleagues."

Reporters and historians said it was hard to recall a similar episode.

No one is suggesting that Acosta threatened President Donald Trump. But right-wing websites and pro-Trump commentators alleged that Acosta mistreated a White House intern who tried to take a microphone away from him during the press conference.

Trump's boosters used words like "pushed" and "slammed." They screamed "assault" and "abuse." Sanders cited this alleged "inappropriate behavior" to suspend Acosta's pass. But all of this is contradicted by the video, which shows Acosta holding onto the mic and saying "pardon me, ma'am," when the intern tries to take it away.

"I was seated next to ⁦Acosta⁩ at today's press conference and did not witness him 'placing his hands' on the young intern, as the White House alleges," Reuters correspondent Jeff Mason wrote on Twitter. "He held on to the microphone as she reached for it."

After asking a follow up question, Acosta let go of the mic.

Even Chuck Ross of The Daily Caller, a website that harshly criticizes CNN, stood up for Acosta.

"Plenty to criticize Acosta about," Ross wrote, "but he did not 'place his hands' on the intern. It's ridiculous for anyone to suggest he did."

Sanders defended her claim by posting a video on Twitter on Wednesday night. The same video was published about two hours earlier by Paul Joseph Watson, an editor-at-large for the Infowars website.

Both Sanders and Watson used the clip to attack Acosta, but the 15-second video has been distorted to make Acosta look menacing.

CNN said in a statement that Sanders "lied" on Wednesday night. "She provided fraudulent accusations and cited an incident that never happened," CNN said. "This unprecedented decision is a threat to our democracy and the country deserves better. Jim Acosta has our full support."

Press freedom groups also weighed in. The Reporters Committee for Freedom of the Press said Sanders' "false description of the events leading up to it is insulting not only to the nation's journalists, but to its people."

The White House Correspondents' Association called the yanking of Acosta's pass "out of line" and "unacceptable."

"We urge the White House to immediately reverse this weak and misguided action," the association added.

Revoke credentials? 'I wouldn't do that'

Senior journalists represented by the association also spoke up.

Hallie Jackson, of NBC, wrote on Twitter that the press corps "should stand up against this."

Peter Baker, of The New York Times tweeted, "This is something I've never seen since I started covering the White House in 1996." Baker wrote that he believes Trump called on Acosta at the presser because "he wants the confrontation."

Elisabeth Bumiller, the Washington bureau chief of The Times, said, "The president should not pick and choose who covers him, and he should certainly not force out a representative of one of the country's leading news organizations."

In 2015 and 2016, Trump's campaign refused to give press credentials to reporters from several major news outlets, including the Washington Post and BuzzFeed.

When the issue came to a head in June 2016, Trump told CNN in an interview that, if elected, he would not revoke credentials. At the White House, "it's a different thing," he said.

"When I'm representing the United States, I wouldn't do that," Trump added.