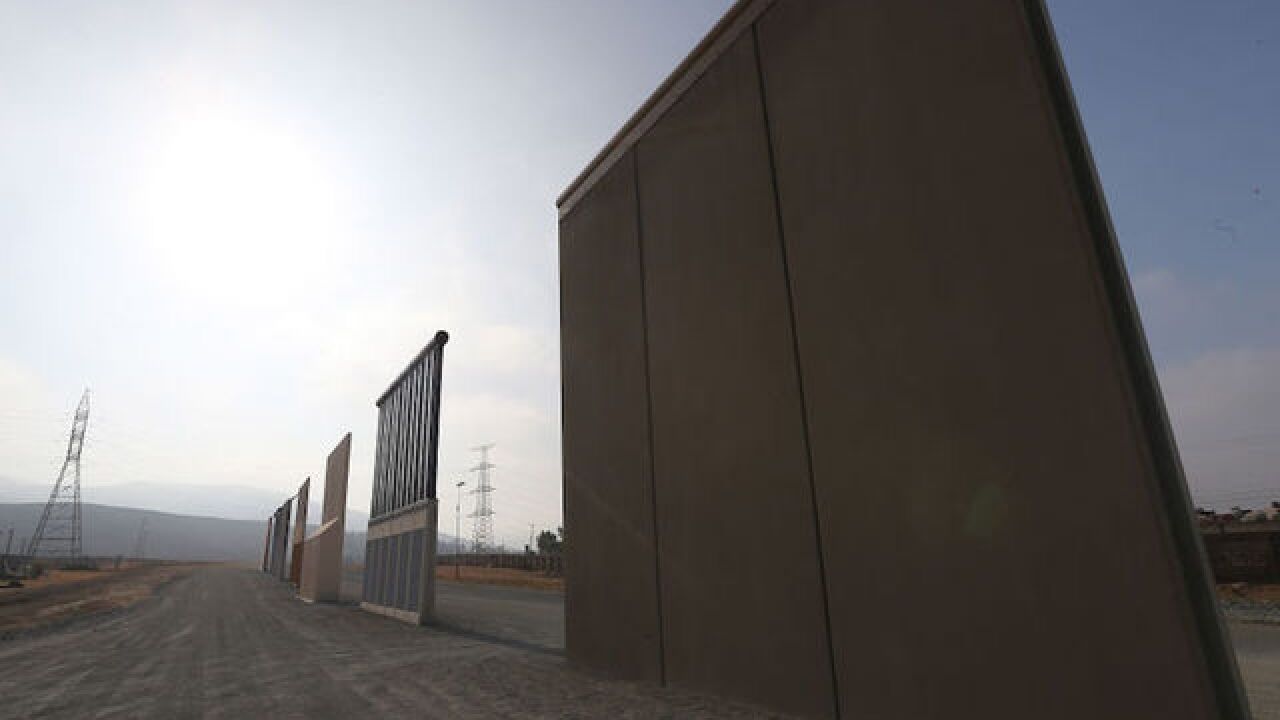 Image copyright 2018 Getty Images. All rights reserved. This material may not be published, broadcast, rewritten, or redistributed.
Mario Tama
<p>U.S President Donald Trump's border wall prototypes stand near the U.S.-Mexico border on July 16, 2018 in San Diego, California. The entire Southwest border saw 34,114 U.S. Border Patrol apprehensions in the month of June compared with 40,338 in May. </p>

Even with the midterm elections looming, Republican leaders in Congress made clear this week they're paying close attention to a looming battle over President Donald Trump's promised border wall.

On Monday, House Speaker Paul Ryan predicted a "big fight" over border security on the horizon, while Senate Majority Leader Mitch McConnell said Wednesday that the GOP is "committed" to working to secure the funding the President wants for his signature campaign pledge.

Republican leaders managed to avoid a battle -- and the political peril of at least a partial government shutdown -- over border funding until after the November elections. But the hot-button issue is on track to flare up when Congress returns to Washington after the midterms, leading to questions over whether there could be a partial shutdown.

"That could be one of the big year-end fights and battles that still remains to be played out," Sen. John Thune, the No. 3 Senate Republican, said on Wednesday. The South Dakota Republican added that "the President is very adamant about getting more money," though he downplayed the potential for a partial shutdown, saying, "I don't accept that that's going to happen."

The challenge for GOP leaders is that promises to fight for the wall could energize conservative voters the party needs to turn out in the midterms, but the threat of a shutdown could risk alienating moderate voters the GOP needs in swing districts. Republicans will also need at least some Democratic votes to pass a spending measure in the Senate -- due to some Senate actions requiring at least 60 votes -- and Democrats may feel even more emboldened to oppose a significant increase in border wall funding if they win the House majority in November.

'We didn't want to go through another shutdown narrative'

With those dynamics at play, GOP leaders are dismissing the possibility of a shutdown while predicting a funding fight.

Sen. John Cornyn, the No. 2 Senate Republican, acknowledged that a fight over border funding might lead to a "lack of funding for certain limited functions," but argued that would not amount to a shutdown even if it did happen.

"We've avoided the shutdown by getting the vast majority of the federal government funded through the next fiscal year," he said.

"We knew that that fight was important and it was coming," the Texas Republican added, "but we didn't want to go through another shutdown narrative."

Congress averted a halt in government funding ahead of the midterms by passing legislation at the end of last month to pay for a large portion of the federal government and a shorter-term spending bill to fund the rest until December 7. The package did not, however, include money for the President's long-promised border wall, effectively putting the issue on hold for lawmakers to figure out how to deal with before the December deadline.

House Majority Leader Kevin McCarthy, a California Republican, helped reignite the border debate this week by announcing plans for a bill that would set aside an eye-popping $23.4 billion to fund a wall.

That is far greater than the $1.6 billion for border security that Congress allocated in a spending bill enacted in March. In August, Trump said he is looking for roughly $5 billion in wall funding "for this next coming year," adding that "we're building the wall, step by step."

Democrats dig in against wall

Democratic Sen. Dick Durbin of Illinois, the minority whip, said he would vote against a $5 billion proposal from Republicans and added that he had "no confidence that the administration can reach an agreement."

If there is a partial shutdown in December, Democrats are likely to portray it as a failure on the part of Republicans to govern.

Durbin said he hopes a shutdown "never occurs" but that if it does it wouldn't be "anything that the Republicans can brag about since they are in charge. I think it will be a further illustration of the ineptitude of this party when it's in control."

Sen. Chris Murphy, a Connecticut Democrat, made a similar argument, saying, "There's a few hard and fast rules on shutdowns and one of them is the party making the demand is normally the party that ends up losing."

Murphy added, "So if Republicans are making the demand and threatening to shut down the government if they don't get border wall funding above and beyond what's been agreed to previously, I'm not sure that they will win that fight."

The President has repeatedly lashed out at lawmakers over funding for the wall, which he said on the campaign trail would be paid for by Mexico. Asked on Wednesday who would be paying for the wall, Thune paused, then said he guessed it would be "the American taxpayer" who would have to shoulder the bill.

Trump said Thursday on "Fox & Friends" that he is "not happy" with the status of the wall and vowed that Republicans would do "something very strong" after the election.

'We're committed to helping the President'

The question now is whether Republicans will have the votes to pass funding legislation that the White House will find acceptable and how bruising the fight will be.

Sen. Richard Shelby, the chair of the Senate Appropriations Committee, described going from a $1.6 billion to a roughly $25 billion price tag as "a quantum leap."

The Alabama Republican said, "Our goal working together is to avoid a shutdown. It would be a partial shutdown, but it's very important. We don't want any shutdown." He called the possibility of a shutdown the "gorilla in the room," but said, "We've got time to work on that."

Ryan -- a Wisconsin Republican whose majority in the House is at serious risk in the midterms -- has echoed the idea that a border wall battle is coming, saying on Monday that Republicans will "fight for securing the border."

"We intend on having a full-fledged discussion about how to complete this mission of securing our border, and we will have a big fight about that," he said, adding, "We have a commitment to go fight for securing the border and getting these policy objectives achieved."

McConnell -- a Kentucky Republican who is also working to protect his majority -- similarly pledged that Republicans would work to secure funding during an interview with The Associated Press this week. He also downplayed the potential for any shutdown.

Asked if there would be a shutdown fight after the midterms, McConnell responded, "That episode, if it occurs, would be in that portion of the government that we haven't funded. Seventy-five percent of it we did fund before the end of the fiscal year." But, he added, "We're committed to helping the President try to get the wall funding."

In response to a question about what level of funding he would accept, McConnell said, "We're going to try to help him get what he's looking for," referring to the President's priorities.