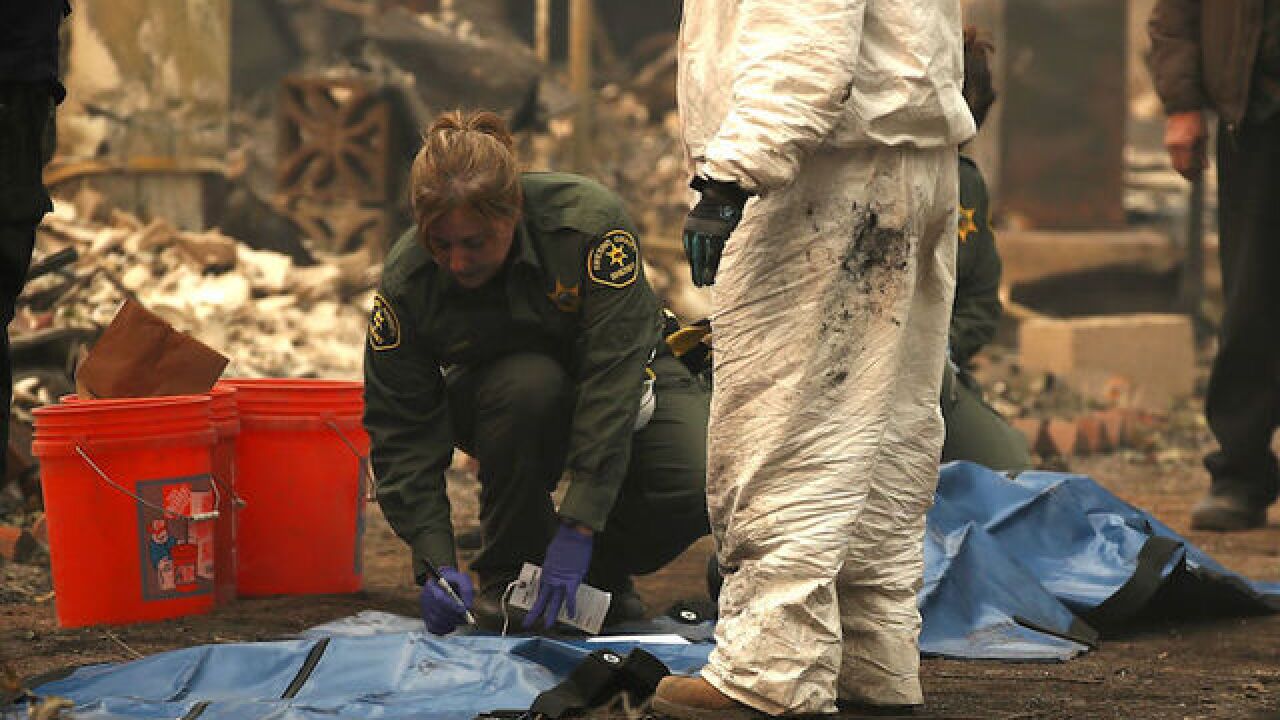 Image copyright 2018 Getty Images. All rights reserved. This material may not be published, broadcast, rewritten, or redistributed.
Justin Sullivan
<p>A Fresno County sheriff deputy logs a body bag with human remains that were discovered at a home that was destroyed by the Camp Fire on November 14, 2018 in Paradise, California. </p>

Hundreds of rescue personnel dressed in white overalls are sifting through smoldering rubble and mangled cars, searching for the remains of the victims of California's deadliest wildfire.

The Camp Fire killed at least 56 people in Northern California and turned the hardest-hit town of Paradise into ash and debris. In the devastating aftermath, cadaver dogs, deputies and coroners are searching the ruins where the town of 27,000 once stood.

With at least 130 people unaccounted for and the number expected to go up, investigators will start collecting DNA samples from relatives of the missing Thursday. More than a quarter of Paradise's residents are senior citizens and most on the list of the missing are 65 or older.

"This is a daunting task. We feel really bad for the people who don't know what happened to their loved ones and our hearts go out to them," Butte County Sheriff's Investigations Sgt. Steve Collins said. "We want to give them some answers."

In Southern California, two people were killed in the Woolsey Fire, bringing the total number of state fire deaths to 58.

The somber search for the missing is painstaking.

It involves 461 people and 22 cadaver dogs in Paradise and parts of Magalia and Concow communities, authorities said.

Dozens of National Guard troops are part of the search effort, Collins said. Once they find the remains, with the help of forensic experts, the coroners are sent to recover them.

To enable searchers access to the destroyed structures, CalFire crews are helping move collapsed buildings and roofs out of the way.

The search area is wide and spread out.

"It's not just the area it's the number of homes, the number of trailers, the multistory buildings. All of that changes the complexity of this operation," Collins said.

Experts are conducting targeted searches by first sending deputies to areas in which people have been reported missing. The number is changing daily with more calls coming in.

More than 9,600 firefighters, including many from out of state, are battling wildfires across California.

The Camp Fire, which has destroyed 8,650 homes and scorched 138,000 acres in Northern California, is one of several in the state. By early Thursday, it was 35% contained.

Adding to the misery for evacuees of the Camp Fire, officials reported a suspected outbreak of norovirus at a shelter in Chico. Evacuees showed some symptoms, but officials are awaiting for test results for confirmation.

Other fires in the state

In Southern California, the Woolsey Fire has killed at least two people in Malibu. Authorities are trying to determine whether a third person found in a burned home in Agoura Hills died as a result of that fire, the Los Angeles County Sheriff's Department said.

Firefighters have started to gain the upper hand on the blaze at 52% containment. More favorable weather conditions are expected Thursday.

More than 230,000 acres burned in California in the past week. That's larger than the cities of Chicago and Boston combined. And in 30 days, firefighters have battled more than 500 blazes, said Cal Fire, the state's forestry and fire protection agency.

More than 300,000 people have been forced from their homes statewide. Most of those live in Los Angeles County, where 170,000 were evacuated.

The evacuees included celebrities who lost their homes in Malibu as well as first responders who are still working despite their own homes being destroyed.