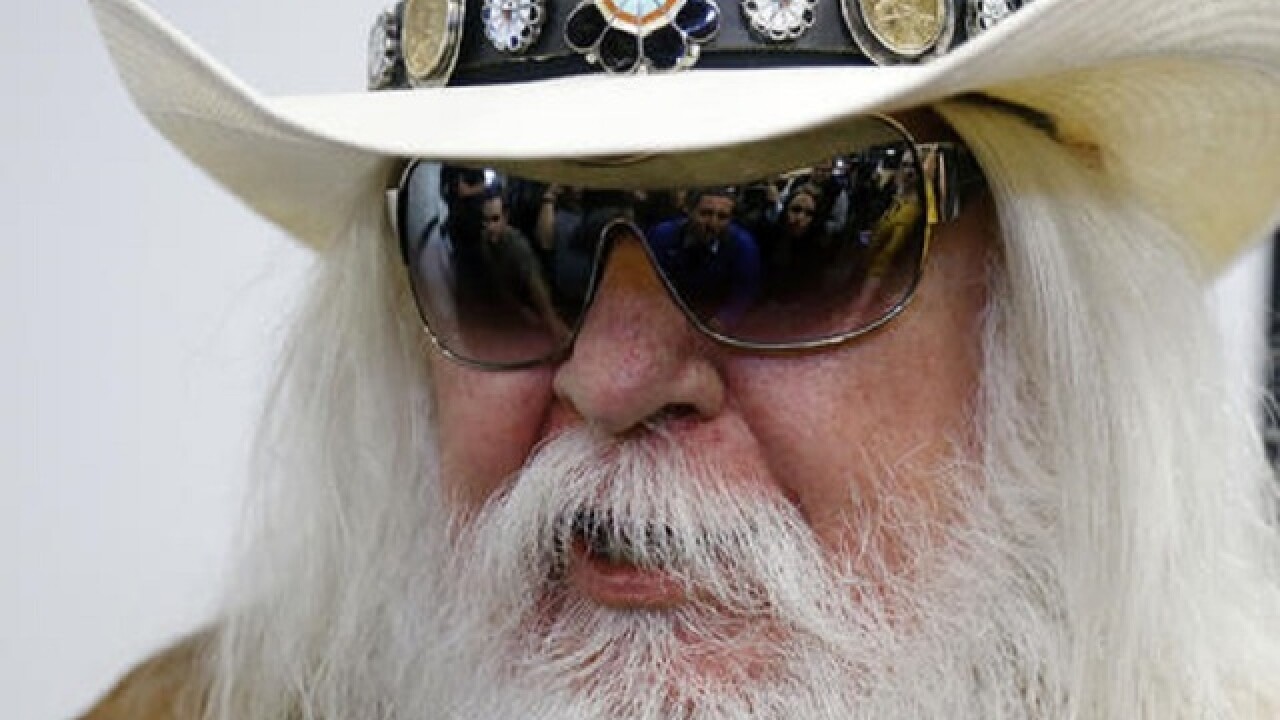 Sue Ogrocki
<p>FILE - In this Jan. 29, 2013, file photo, reporters are reflected in the sunglasses of Leon Russell as he answers a question at a news conference in Tulsa, Okla. Russell, who sang, wrote and produced some of rock 'n' roll's top records, has died. (AP Photo/Sue Ogrocki, File)</p>

NASHVILLE, Tenn. (AP) — Leon Russell, who performed, sang and produced some of rock 'n' roll's top records, has died. He was 74.
Russell's wife, Jan Bridges, said in a statement that her husband died in his sleep Sunday at their Nashville home. She said Russell had heart bypass surgery in July and had been planning on resuming touring in January.
His final performance was July 10 in Nashville.
Besides his music, Russell was known for his striking appearance: wispy white hair halfway down his back and that covered much of his face.
"A true patriarch has been lost," said Beau Charron, Russell's guitar and pedal steel player, said in a statement. "Leon Russell fathered many musicians and fans thru life and love with his music. On his own terms. My years with him have shaped me in profound ways, and I am heartbroken to lose my mentor and friend."
Tributes poured in from entertainers who appreciated Russell's gospel-infused southern boogie piano rock, blues and country music.
On Twitter, Cat Stevens wrote that Russell was "a great influence and songwriter." Charlie Daniels said Russell "left a lot of great music behind." And Richard Marx tweeted: "What an extraordinary messenger of beauty he was."
Russell played keyboard for the Los Angeles studio team known as the Wrecking Crew, helping producer Phil Spector develop his game-changing wall of sound approach in the 1960s.
He wrote Joe Cocker's "Delta Lady" and in 1969 put together Cocker's "Mad Dogs and Englishmen" tour, which spawned a documentary film and a hit double album.
As a musician, primarily a pianist, he played on The Beach Boys' "California Girls" and landmark "Pet Sounds" album, Jan and Dean's "Surf City," the Ronettes' "Be My Baby," and the Byrds' "Mr. Tambourine Man." He also played guitar and bass.
Russell produced and played on recording sessions for Bob Dylan, Frank Sinatra, Ike and Tina Turner, the Rolling Stones and many others. He arranged the Turners' "River Deep, Mountain High."
He also recorded hit songs like "Tight Rope" and "Lady Blue" and participated in "The Concert for Bangladesh." John Lennon, Ringo Starr and George Harrison played on his first album, "Leon Russell."
Later, Ray Charles, Aretha Franklin and Willie Nelson were among those to cover Russell's ballad "A Song for You" that he wrote for the album.
His concerts often ended with a rousing version of "Jumpin' Jack Flash." In 1973, Billboard Magazine listed Russell as the top concert attraction in the world. About this time, he was the headline act on billings that included Elton John and at other times Willie Nelson.
In a 1992 interview with The Associated Press, Russell said music doesn't really change much.
"It's cyclical, like fashion. You keep your old clothes and they'll be in style again sooner or later.
"There are new things, like rap. But that's a rebirth of poetry. It's brought poetry to the public consciousness."
In 2011, Russell was chosen for induction into the Songwriters Hall of Fame. He also was honored with an Award for Music Excellence from the Rock and Roll Hall of Fame.
He and Elton John released "The Union," a critically received duo album in 2010.
"He was a mentor, inspiration and so kind to me," Elton John said in a Facebook post Sunday. "Thank God we caught up with each other and made 'The Union'. He got his reputation back and felt fulfilled. I loved him and always will."
Born Claude Russell Bridges in Lawton, Oklahoma, Russell began as a nightclub piano player in Oklahoma at the age of 14, also backing touring artists when they came to town. Jerry Lee Lewis was so impressed with Russell that he hired Russell and his band for two years of tours.
He relocated to Los Angeles in 1959, where he became known as a top musician, and later to Nashville.
In the early 2000s he began his own record label, Leon Russell Records.
Copyright 2016 The Associated Press. All rights reserved. This material may not be published, broadcast, rewritten or redistributed.