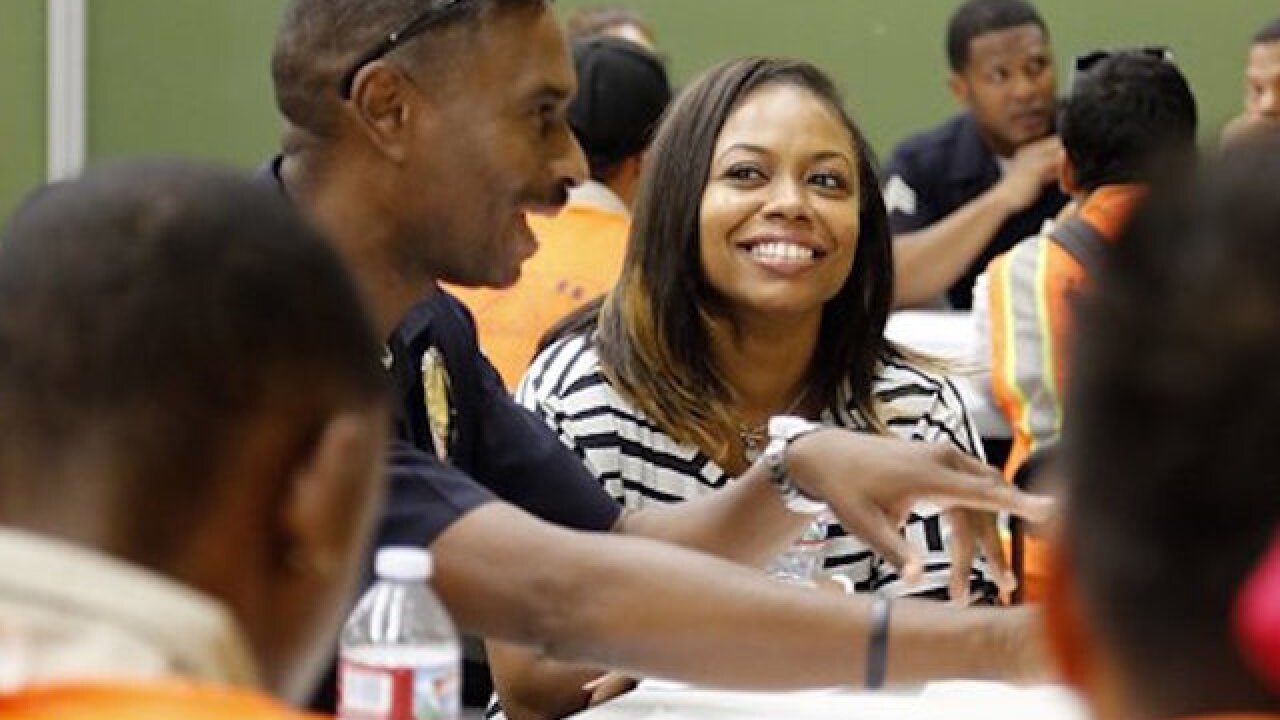 LOS ANGELES (AP) — Rodney King's daughter was just 7 when her father was beaten bloody by officers with the Los Angeles Police Department.

She was eating breakfast when it came on the morning news — video footage showing LAPD officers kicking and hitting her unarmed father dozens of times with batons. It gave her nightmares for years.

In a striking scene that stood in sharp contrast to the 1991 beating, the now 32-year-old Lora King stood shoulder to shoulder with about a dozen LAPD officers Thursday, hugging many of them. She was there to join them in a talk to young people who have had their own run-ins with police.

Her message: It's more important to build bridges with officers than to stand against them.

"That's actually what my dad stood for, so I'm following in his footsteps. He had no hatred in his heart for police," King said ahead of her talk with about 50 young adults with the Los Angeles Conservation Corps, which provides at-risk youth with job training, education and work.

King, an administrative assistant at an accounting firm, said she's had her own negative interactions with police. Despite that and her father's beating, she said a whole police department can't be judged by the actions of a few.

"It is hard to trust," she said. "But it's not going to get anything resolved by hating."

More than anything, officers need to listen to the community, and the community needs to keep an open mind, she said.

Rodney King died at the age of 47 after he accidentally drowned in 2012.

His beating was the touchstone for one of the most destructive race riots in the nation's history. The 1992 riots lasted three days and left 55 people dead, more than 2,000 injured and swaths of Los Angeles on fire. At the height of the violence, King pleaded on television: "Can we all get along?"

Lora King said her father's beating was an eye-opener at the time, "but it's like everyone dozed off again."

Concern over police tactics has been mounting in recent years in the wake of a number of deaths of unarmed black men at the hands of officers across the country. Police have increasingly become targets themselves, most notably when a sniper killed five officers in Dallas in July.

King sat next to LAPD officers as they spoke with young adults about interacting with police, discussing what they can do to help diffuse situations and how police can improve.

Lovis Bell was among them.

The 23-year-old landscaper, who is black, first learned of Rodney King's beating when he was 14. He said he's had his own negative interactions with police that he believes were racially motivated, including once being slammed up against a gate, leaving scars on his chest.

But Bell said Lora King's message was powerful and struck a chord.

"I'm still mad, but there's no point," he said. "There's no room for hate inside my heart."

Senior Lead Officer Rashad Sharif, who is black, was still a rookie with LAPD when King was beaten and was in the thick of the riots the following year.

He said Lora King's willingness to join the department to reach out to young people shows just how much LAPD has evolved in the past 25 years.

"That's a lot of courage to come here and be like, 'That's the same uniform that put my dad in the hospital,' " Sharif said. "Having her here is like full circle ... I just wish I could have met her dad to say, 'Hey, I'm sorry, too.' "