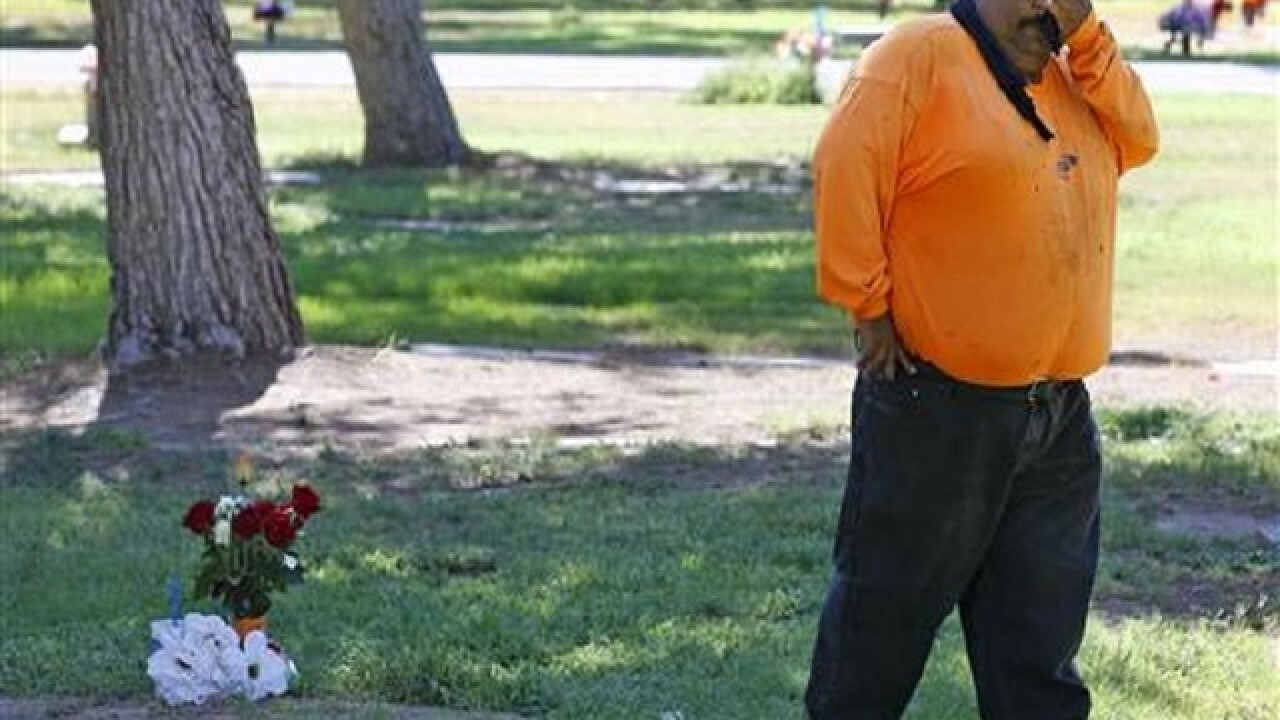 PHOENIX (AP) — In a blue-collar Phoenix neighborhood known for gang and drug violence, Margarito Castro's 19-year-old son Manny was learning to be a welder just like his father. Father and son carpooled together to work until June 10, when Manny was shot dead as he sat in his car in front of his girlfriend's house by a suspect identified this week as the city's first serial killer in a decade.
Now Margarito Castro goes to visit Manuel "Manny" Castro Garcia's grave daily, mystified why someone targeted his son and six other people since March. Police say all were killed by a thin, lanky man with a handgun who is probably in his 20s and that there is no known motive.
He is possibly Hispanic, like many of the 208,000 people living in the Maryvale neighborhood where all but one of the killings happened after dark and just before dawn.
Shootings often ring out at night in Maryvale, a neighborhood of strip malls and auto parts stores where most of the stucco single-story homes feature bars on windows and chain-link fences protecting yards.
People who don't live in the neighborhood frequently avoid driving through it at night, but Margarito Castro said his son never got involved with crime or gangs. And a police detective who went through the young man's belongings and pored over his social media accounts told Castro he couldn't figure out why someone would want to kill his son.
"He was a good boy," Castro said from under the shade of a tree in the cemetery, where he tries to stay half an hour on every visit despite temperatures hitting 110 degrees.
The six killings in Maryvale — and one in another working class neighborhood about 10 miles away — come after six people were killed and 19 wounded in 2005-2006 series of seemingly random shootings that terrorized Phoenix.
But those happened all around the sprawling city of 1.5 million spanning more than 500 square miles. Airport janitor Dale Hausner and his roommate Sam Dietman, a petty criminal, were given life sentences. Hausner committed suicide in prison by overdosing three years ago.
All of the latest victims were Hispanic or black, and one was a 12-year-old girl. The men and women were shot outside homes as they stood or sat in cars by a suspect or suspects firing a handgun from inside a car described as both light and dark or while on foot near the victims and then fleeing in the car, police said.
"We're talking about people outside of residential areas or outside of a home in the street, next to the street, with a description of a suspect that drives up, gets out, almost without any prior contact just starts shooting and then flees in that vehicle," Phoenix police Sgt. Jonathan Howard said.
He added: "Everybody has reported one person. Some of our witnesses have reported that they believe there were additional people or another person in the car, and certainly we're keeping an open mind."
A 16-year-old boy and a 21-year-old man were also shot but survived. One of them gave enough information for police to create a composite sketch of the suspect with short-cropped dark hair. Police have few other leads about the suspect and the vehicle and are appealing to the public for tips.
So far, officers have not identified a motive, unsettling Maryvale residents who say gunfire at night is relatively routine but call the latest killings scarier because they're not attributed to the neighborhood's longstanding problems with drug violence and gang members settling scores.
At the community YMCA, employees now take extra care to make sure that children are picked up by parents or relatives they know and the employees themselves leave the building as a group instead of heading outside on their own, YMCA worker Jenny Mendez said.
Those precautions were supposed to be routine before the killings were labeled the work of a serial killer, "but now we make sure we do it," Mendez said.
Retired casino cook John Tang now does all of his grocery shopping during the day because he's worried he could be shot if he walks outside after dark.
"I don't shop at nighttime," Tang said. "I don't want to be another victim."
At Greenwood Memory Lawn Cemetery, Castro held back tears and said he wants justice for the killing of his son.
"Nothing is going to bring him back," Castro said. "Everything is with God. He's the one that's going to make this person or persons pay for this."
Copyright 2016 The Associated Press. All rights reserved. This material may not be published, broadcast, rewritten or redistributed.