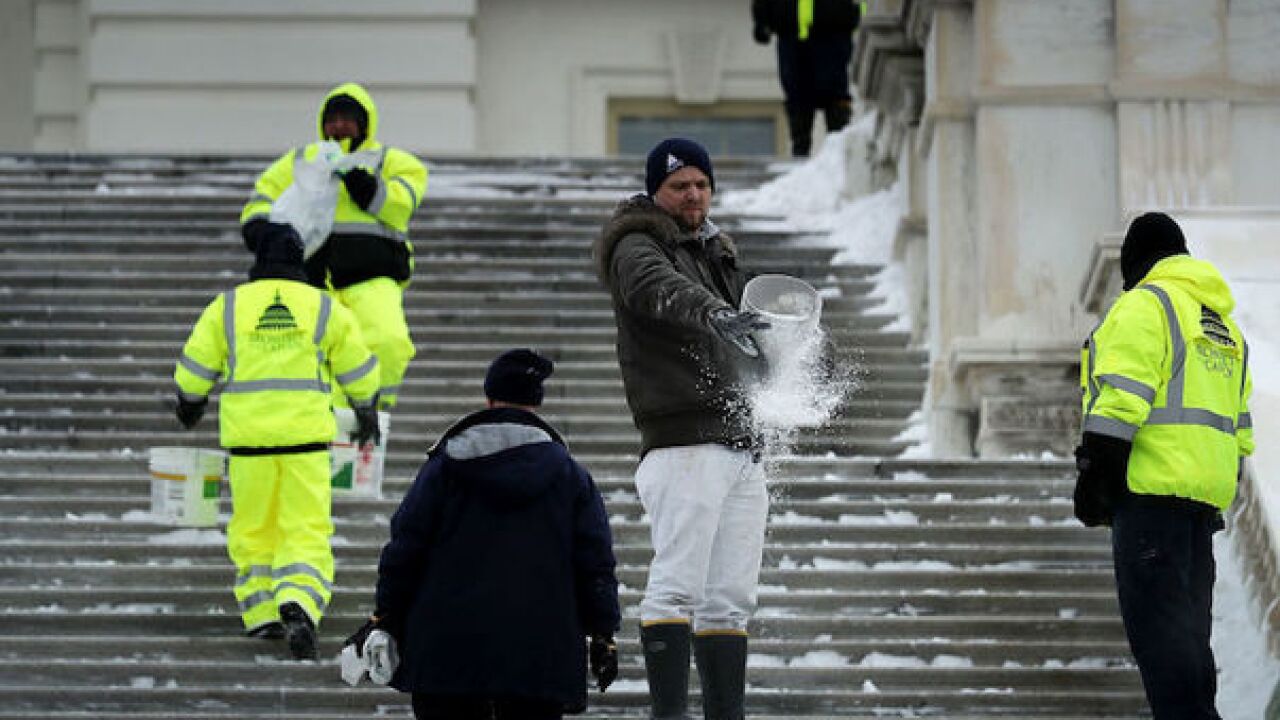 Copyright Getty Images
Chip Somodevilla
<p>Architect of the Capitol employees spread ice melt on the steps of the West Front of the U.S. Capitol January 4, 2018 in Washington, United States. </p> 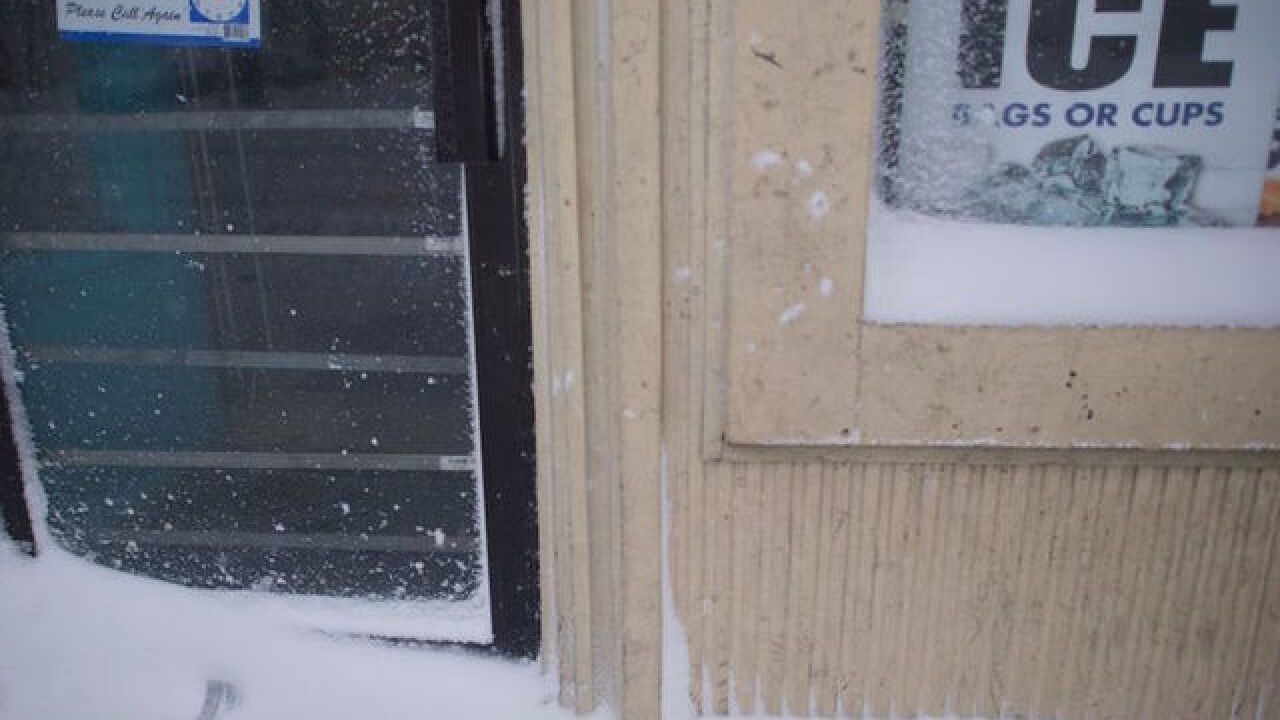 The arctic cold should loosen up soon, but don't pack away your earmuffs yet.

An ice storm is expected to blanket Northeastern and Midwestern cities Sunday and Monday as warmer air begins to move through the Midwest and into the East, CNN meteorologists said Saturday.

Ice could accumulate in cities such as Chicago, Cincinnati, Cleveland, Washington, New York and Atlanta, they said. Chicago has an 80% chance of snow Sunday night, whereas Boston has a 20% chance of snow showers Monday, the National Weather Service predicted.

By the middle of the week, things should really warm up, with normal and even above-normal temperatures prevailing.

Saturday, weary emergency crews and homeowners ventured into the cold to clean up after a "bomb cyclone" rumbled across the Northeast.

Whipping winds of 20 to 30 mph and below-average temperatures caused headaches such as more power outages and flight cancellations.

"Suffice to say, it will be a brutally cold weekend," the National Weather Service said. "But some relief is in sight heading into early next week."

The misery extended from North to South.

This week's storm dumped more than a foot of snow across 10 states, deluged streets in Massachusetts with icy water and is now bringing extremely strong northwest winds and frigid arctic air to the United States.

In Scituate, Massachusetts, the nor'easter damaged cars and structures and left boulders and sand on flooded roads, CNN affiliate WBZ reported. Throughout the region, stories of dramatic rescues emerged, and residents pondered the repairs they need to make.

"I've got some work to do in the spring," said Mark Bramblett, who evacuated his home in Scituate.

At airports in New York, Philadelphia and the Washington area, more than 1,000 flights were canceled Friday, CNN meteorologist Allison Chinchar said, though that number had dropped considerably by Saturday, according to the tracking site Flightaware.com.

Passengers were frustrated and angry by hours-long delays at JFK International Airport in New York.

Alban Denoyel, his pregnant wife and their 3-year-old flew in from Paris and had to wait several hours to deplane and several more hours to claim their bags, Denoyel said on Twitter. They landed at 10 p.m. Friday and left at 9 a.m. Saturday.

Daniel Davies told CNN via Twitter he finished a 10-hour flight only to be stuck inside a plane on the tarmac for about five hours. Then he and other passengers were loaded onto buses, he said.

In Charleston, South Carolina, the airport reopened Saturday afternoon after being shut for three days. Five inches of snow and ice fell at the airport, which lacks ice and snow removal equipment.

The National Weather Service said the highs Saturday afternoon were to be around 20 to 30 degrees below average in many locations, and daily temperature records were expected to be broken.

"Expected highs will be in the single digits across the lower Great Lakes down into Ohio. Meanwhile, readings in the teens are likely from Washington, D.C., up to New York City with single digits up into coastal New England," the weather service said.

"Based on the latest forecasts, overnight temperatures should go below zero degrees over most of New England with perhaps even some 5 to 10 degree numbers all the way into North Carolina."

Millions were experiencing frigid wind chills this weekend, from the Great Lakes to New England.

Wind chill is the perceived temperature that people and animals feel when exposed to the elements. Or as meteorologists say, it's the "feels-like" temperature.

"As wind increases in speed, it increases the rate of heat loss on your body, making you feel colder than it actually is," CNN meteorologist Derek Van Dam said.

Wind chill is calculated by the rate the body loses heat due to speed winds and cold temperatures.

Saturday's cold snap has been called dangerous because it will make it easier for people to experience hypothermia and frostbite.

If the wind chills range from 15 to 25 degrees below zero, as expected Saturday in much of western and northern Pennsylvania, the onset of frostbite can begin within 10 minutes.

And when the wind chill registers below minus 50, it would take only five minutes for exposed skin to develop frostbite.

At least 22 people have died this week because of severe weather, officials said.

Six deaths were reported in Wisconsin, four in Texas, three in North Carolina, two in Virginia and one each in Ohio, Massachusetts, Michigan, Missouri, North Dakota, New York and South Carolina.

A man shoveling snow in Babylon, on New York's Long Island, had a heart attack and died Thursday during the storm, Suffolk County spokesman Derek Poppe told CNN on Saturday.

In Arlington, Massachusetts, a state Water Resources Authority employee was found unconscious in a snow bank while doing snow removal work Friday, Arlington Police Chief Fred Ryan said. The man, 60, was taken to a local hospital where he was pronounced dead, Ryan said.

In Chesterfield, Virginia, a 9-year-old girl died Thursday when she rode her sled down a driveway into the path of a pickup, police Lt. Dennis S. Proffitt said.

A 64-year-old man died of hypothermia in Akron, Ohio. A Meals on Wheels driver found his body lying in front of his wheelchair on the porch of the man's home.

In South Carolina, a man was killed after his pickup slid on icy roads, hitting a median and several trees, according to the Kershaw County coroner.

Emerging from the storm

The storm heaped plenty of misery across New England. Waves from the sea washed into Boston streets. And the tide in the city -- 15.16 feet -- broke the record set during the blizzard of 1978, the National Weather Service said.

The storm flooded streets in some communities in coastal Massachusetts, turning roads into slushy rivers. Firefighters and the National Guard scrambled to rescue dozens of residents stranded by freezing water pushing in from the Atlantic. First responders braved the frigid waters using rubber rescue boats and high-water vehicles.