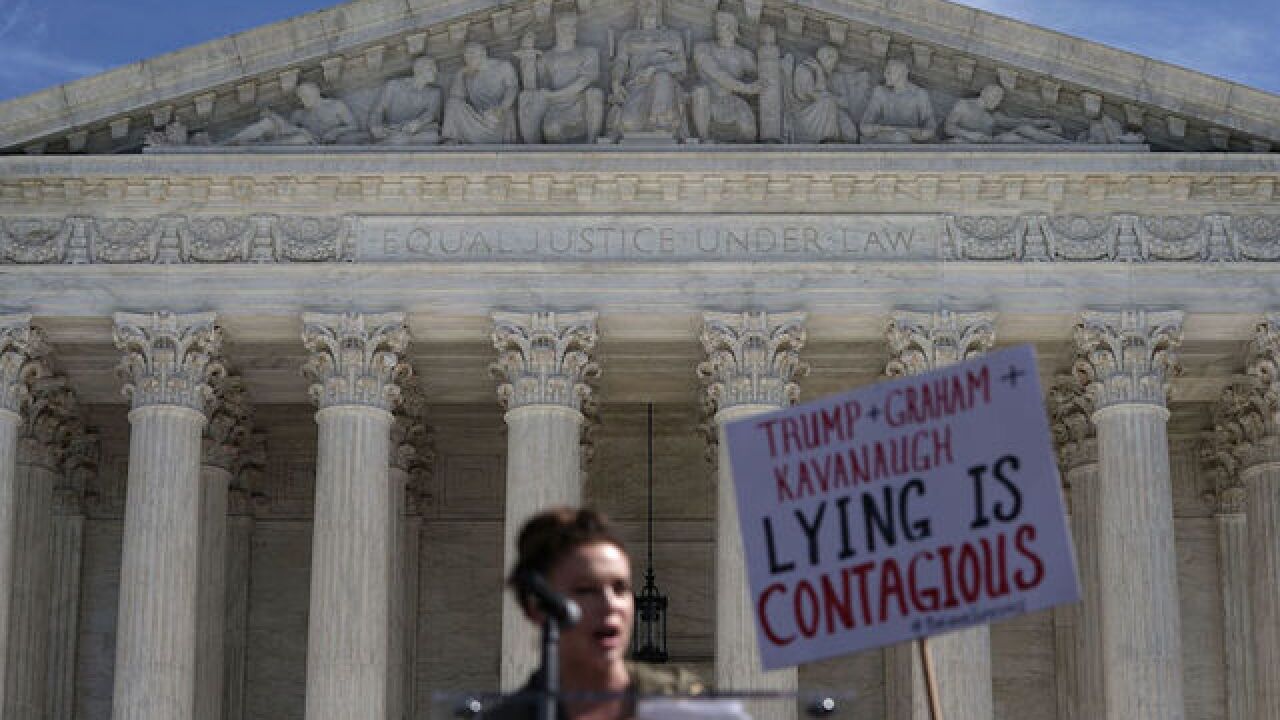 Image copyright 2018 Getty Images. All rights reserved. This material may not be published, broadcast, rewritten, or redistributed.
Alex Wong
<p>Actress Alyssa Milano speaks during a rally in front of the U.S. Supreme Court September 28, 2018 in Washington, DC. Activists staged a rally to call to drop the nomination of Judge Brett Kavanaugh to the U.S. Supreme Court. </p>

A short-handed Supreme Court will take the bench again on Monday to gavel in a term that has been totally eclipsed by the raging battle over the confirmation of Brett Kavanaugh.

Back in July when President Donald Trump announced that he would nominate Kavanaugh to take the seat of retiring Justice Anthony Kennedy, a move that would cement a conservative majority for decades to come, Republicans hoped that Kavanaugh would be seated for the start of the new term.

That all changed when Christine Blasey Ford came forward with allegations of sexual assault, which Kavanaugh vehemently denies. Now Kavanaugh's confirmation, which seemed certain a few weeks ago, has been thrown into question.

So for the second time in recent years, Chief Justice John Roberts will find himself having to navigate the docket with only eight justices.

That means he will proceed gingerly, perhaps delaying some pending petitions to hear cases, examining existing cases to see if more narrow avenues of agreement are available and hoping that some cases currently in the lower courts on divisive issues continue to percolate below before reaching the high court.

All the while, the justices know that even if Kavanaugh is not confirmed, President Donald Trump will likely nominate another conservative, and the court is still poised to take a hard right turn.

"I think a more accurate caption for this term is the 'calm before the storm,'" Irving Gornstein, executive director of the Supreme Court Institute at Georgetown Law said at a recent event.

Just a week ago the eight justices -- four liberals and four conservatives -- met behind closed doors to discuss the mountain of cert petitions that had piled up over the summer to vote on which of the cases should be added to the Court's docket.

It takes four justices to agree to hear a case. But Roberts will move carefully. He knows that if an eight member court splits 4-4, then the justices are left simply upholding the lower court ruling and setting no precedent.

"In recent years, whenever the court has been short-handed, we've seen it move more cautiously by both agreeing to review fewer total cases and by looking for narrow grounds around which to build consensus in the cases it does hear," said Steve Vladeck, CNN Supreme Court analyst and professor at the University of Texas School of Law.

"Even if Judge Kavanaugh is ultimately confirmed and is on the court by the end of October, I still think we should expect this term to be relatively quieter and slower than what we saw last year," Vladeck added.

In recent years the pre-term "long conference" has resulted in some significant grants to start off the new term. But this year was different. There was a low number of grants in less high-profile cases. Petitions on more controversial issues were not acted upon.

For instance, the justices are considering a case about a 93-year-old war memorial in Maryland. Challengers argue that the monument violates the Establishment Clause of the Constitution because it stands on public ground and is in the shape of a cross. A lower court ruled in their favor, holding that the "monument here has the primary effect of endorsing religion and excessively entangles the government in religion."

Supporters of the monument want the justices to step in and take the case, pointing out there are similar memorials in Arlington National Cemetery. The court could grant this Monday morning, but might decide to put off a case that could be closely divided.

Another pending petition concerns whether the 8th Amendment prohibits all sentences of life without parole for juvenile offenders. In 2012, the Supreme Court held that mandatory life sentences for juveniles were unconstitutional, but it did not categorically ban the imposition of the penalty. The justices discussed this last week but did not vote to take up the case.

Several controversial issues could make their way in some form to the justices in the coming weeks and months. Those include challenges to the Affordable Care Act, the Trump administration's decision to phase out the Deferred Action for Childhood Arrivals program and cases concerning LGBT rights and sanctuary cities.

Tuesday, justices will hear a case involving the death penalty that will be closely watched to see how divided the eight justices are.

Madison v. Alabama concerns whether it is cruel and unusual punishment to execute a person who now suffers from dementia and no longer remember committing the crime. It is a case where Anthony Kennedy could have been the swing vote because he voted at times to narrow the death penalty. If the justices are divided, this could be a case that comes back once Kavanaugh or another nominee is confirmed.

One of the most interesting cases on the docket this fall is Gamble v. United States. On the surface, it is a technical case concerning the double jeopardy provision of the Fifth Amendment that says no person should be tried for the same offense twice in federal court.

The case concerns Terance Martez Gamble, who was convicted in 2008 for second-degree robbery in Alabama. Both federal and state law prohibited him from every having a handgun again.

Four years later, however, he was pulled over for a broken taillight and police found a handgun in his car.

He was prosecuted under state and federal law.

He argues he was subject to two convictions and two sentences for a single offense of being a felon in possession of a firearm and, as such, must spend three additional years in prison. "The Double Jeopardy Clause bars that result," his lawyers argue.

The case could have nationwide implications with respect to the ability of state and local prosecutors to also try those convicted (or acquitted) of federal crimes. But some point out that it could have an impact for Trump and the pardon power.

"Some say that if President Trump pardons those close to him who have been convicted of federal offenses, like Michael Cohen, Michael Flynn or Paul Manafort, a ruling that got rid of this 'separate sovereigns' idea would prevent states from trying to hold those same individuals to account under state law," Vladeck said.