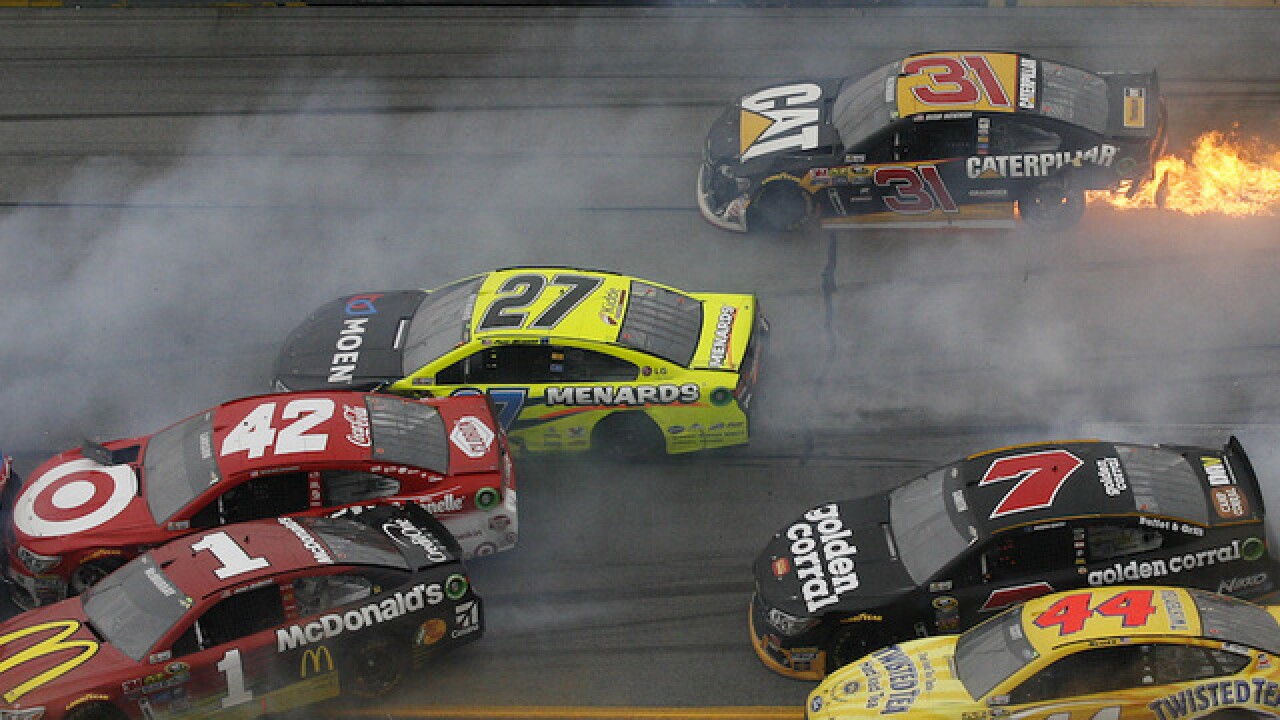 Skip Williams
<p>Flames trail from the car of Ryan Newman (31) after a pileup of crashed cars around the track during the NASCAR Talladega auto race at Talladega Superspeedway, Sunday, May 1, 2016, in Talladega, Ala.</p>

TALLADEGA, Ala. (AP) — Brad Keselowski won a demolition derby at Talladega Superspeedway, where multiple wrecks caused two cars to go airborne and led to millions of dollars in damage to race teams.

Keselowski's cruise to the checkered flag was anticlimactic Sunday compared to all the other trouble.

Chris Buescher's car flipped three times in an early crash, and Matt Kenseth was turned upside down in the waning laps. In Kenseth's accident, Danica Patrick hit hard into an energy-absorbing wall that that seemed to buckle upon impact. She appeared shaken after the hit.

"I would say that's probably the most scared, trying to hop out of a car with the fire on the inside. I haven't had fire on the inside before," she said. "I have a pretty decent bruise on my arm and my foot, and my head feels like I hit a wall at 200. My chest hurts when I breathe."

There were 21- and 12-car accidents in the final 28 laps. And, as Keselowski crossed the finish line, another wreck in the back of the pack punctuated the sloppy day. NASCAR's box score showed 35 of the 40 cars were involved in some sort of accident.

"I hate it. I'd much rather be at home," said Busch, the reigning Sprint Cup Series champion. "I've got a win. I don't need to be here."

Austin Dillon finished third and said he enjoyed the race, even though it was nerve-wracking. Dillon was in his own horrific crash at Daytona last July and said the style of racing at restrictor-plate tracks creates an atmosphere of danger.

"We all have to do it. I don't know how many really love it," Dillon said. "I know our mom's, wives and girlfriends don't like it. We don't like to be part of crashes. If people are cheering for crashes, man, it's not a good thing."

The pace of Sunday's race was up a tick because of potential rain that could have shortened the event from its scheduled 180 laps. Once the race hit the halfway point and was official, drivers began their charge to the front because they couldn't avoid waiting and rain suddenly ending the event.

Patrick, who was inside the top 10 when she was hit by another car and turned into Kenseth, who went airborne, said the potential rain intensified the racing.

"Some people took it over the edge."