Thailand cave rescue: The health toll of waiting for freedom 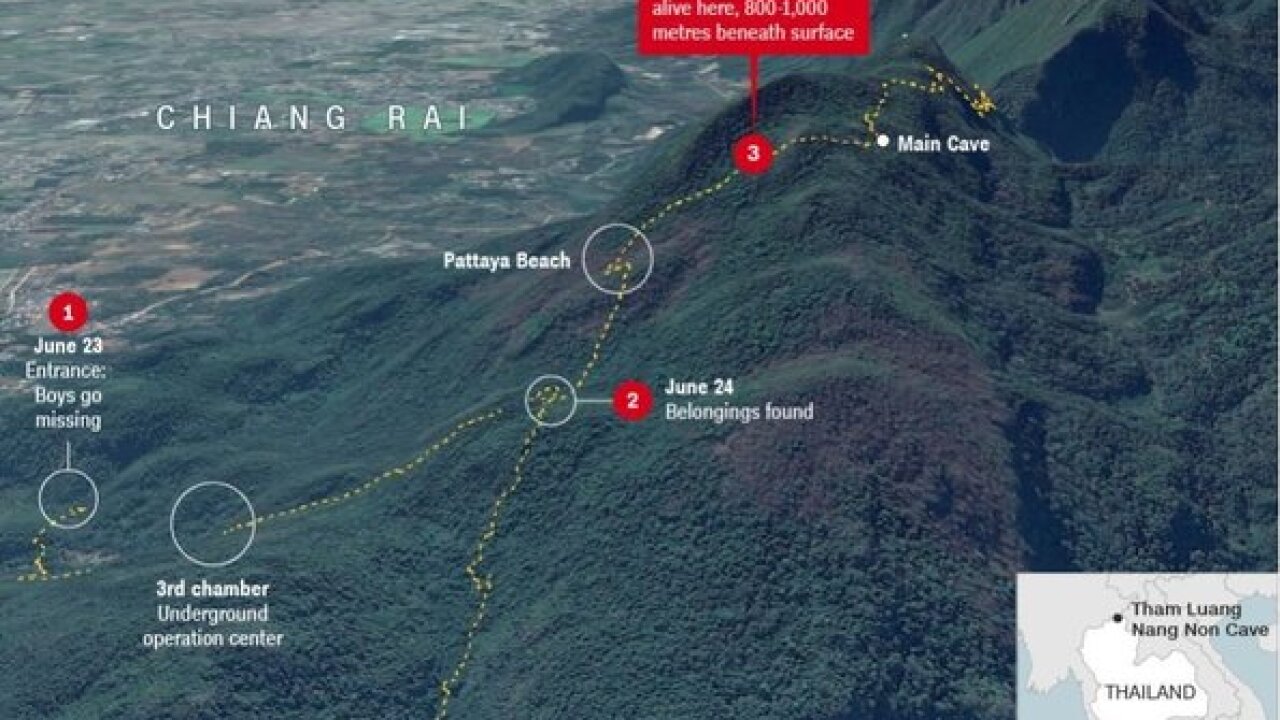 The world let out a sigh of relief when the missing members of a  Thai youth soccer team were found  alive in a cave in northern Thailand on Monday.

The 12 boys, ages 11 to 16, and their soccer coach were assessed overnight and appeared to have sustained only light injuries such as skin rashes, according to Thai navy Seals. A doctor and nurse are among those tending to the boys and their coach.

The Wild Boar soccer team had been exploring the cave network June 23 when heavy seasonal rains flooded the entrance, trapping them inside. Their sudden disappearance sparked a desperate nine-day search and rescue effort.

Hundreds of volunteers and specialist international search teams battled heavy rains to locate the missing group, as Thailand is in the midst of its monsoon season. The search turned tense as time went on and concern grew about whether the group would be found alive.

Now that the team has been found, rescuers are working around the clock to figure out  how to free the boys and their coach  from deep inside the cave network, where they are accessible only via a narrow, flooded channel.

Attempts to pump water from the cave or find another opening have failed, putting the boys and their coach in an emotional wait -- and it's not clear how long it will go on.

When rescuers found the missing people in the pitch-black cave, the boys expressed that they were hungry and didn't know what day it was.

They asked the rescuer, "We going today?"

Being trapped in a confined space for days also can lead to fear, confusion, anxiety and feelings of helplessness and hopelessness, said Sandy Capaldi, psychologist and associate director of the Center for the Treatment and Study of Anxiety at the  University of Pennsylvania's Perelman School of Medicine .

Those immediate psychological impacts also may be different among children versus adults.

"While an adult may be prone to try to think about the situation more rationally -- telling himself that rescue will surely come because others will be looking for them -- children may be unable to do so and may, therefore, experience more negative feelings," Capaldi said.

"The long-term psychological impacts of traumatic events such as this for adolescents, however, are often very similar to adults," she added.

Thinking that you have been rescued, only to learn that you might have to wait days, weeks or months before being freed can take a psychological toll, too, according to experts.

Psychological impacts also can continue after someone is rescued, such as in the form of nightmares, trouble sleeping, being overly alert or on guard or having difficulty concentrating.

"For some, these reactions subside over time, but for others, they may remain and result in post-traumatic stress disorder," Capaldi said.

"While not everyone who experiences a traumatic event will develop PTSD, children and adolescents who do develop PTSD are at increased risk for anxiety, eating and substance use disorders," she said. However, "the link between the development of PTSD and these other disorders is unclear."

Being trapped in a cave or elsewhere in the wild also can put a person's acute physical health at risk of injuries; illnesses; lack of water or food; germs that cause certain bacterial or fungal infections; and exposure to wild animals that might cause harm, such as snakes or bats, said Dr. Paul Auerbach, a wilderness medicine expert and professor of emergency medicine at  Stanford University .

Once rescued, people who may be trapped in the wild would need to have their temperatures checked as part of a general medical evaluation.

"They will likely be dehydrated and suffer from acute malnutrition, which will combine to make them weak, so they will need to have a great deal of assistance for safety," Auerbach said.

"They have lost muscle mass and may have body chemistry abnormalities. So the medical evaluation and treatment will undoubtedly include rehydration, either intravenously or orally. It's possible that some of them may have suffered infectious diarrhea," he said.

"Because their gastrointestinal systems will have slowed down considerably from lack of eating, they will need to be eased into ingesting easily digestible foods, so may require intravenous replenishment with glucose and electrolytes," which are sugar and liquids, he said.

Also, when trapped in a cave, the darkness even can leave its mark on your health.

"Constant total darkness would cause disorientation to time of day and perhaps disrupt circadian rhythms that support restful sleep," Auerbach said. "It might also add to emotional distress."

As for the soccer team, authorities announced plans to supply the group with four months' worth of food as well as to teach the boys how to scuba dive.

The reference to four months has been interpreted as a potential sign that authorities are considering waiting until after the rainy season ends in October to begin the rescue operation.

Yet with heavy rain expected to continue in the coming days, rising water levels could force rescuers to act sooner rather than later.

Diving is considered among the least preferable escape methods, with experts cautioning that any attempt to traverse the narrow passageways will be fraught with difficulties, especially if the children can't swim or are physically weak from being trapped in the cave for days.